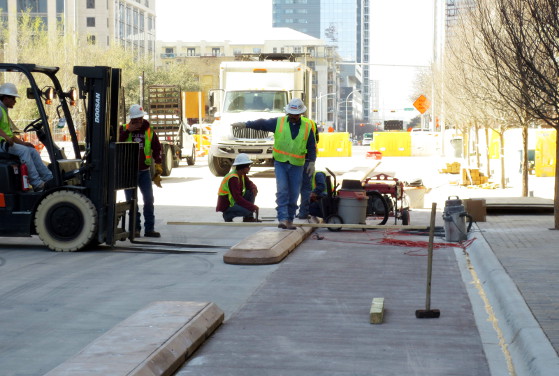 After five years of using parked cars and plastic posts to create the first generation of modern protected bike lanes, U.S. cities are starting to experiment with the next step: curbs.

In Chicago, Clybourn Avenue and State Street are likely to get the city’s first curb-separated bike lanes. In Seattle, the city has used two wholesale road reconstructions, on Linden Avenue and Broadway, as chances to install cement curb separations. In Austin, two blocks of 3rd Street downtown are now fitted with modular precast curbs to create a protected bike lane. And Long Beach, Calif., has been using curbs for protected bike lanes since 2011.

“We see what’s happening in Austin and New York and Seattle and there is a little bit of envy there,” Amsden said in an interview. “They create kind of a sense of place.”

The sense that a curb can fit more gracefully than posts into the feel of a street “goes a long way to selling these projects to people who may not care about bikes,” Amsden added. 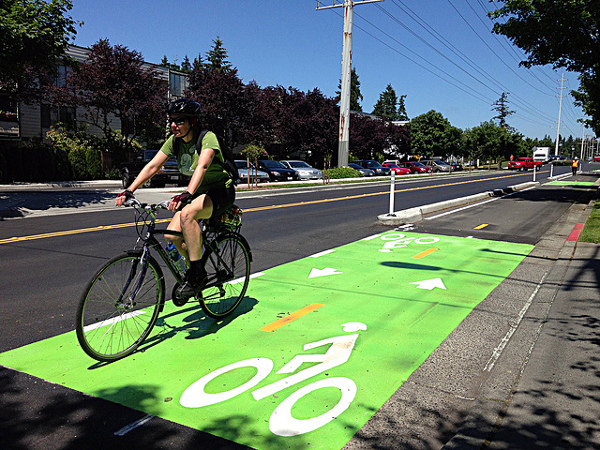 The new Linden Avenue in Seattle is the city’s first with a low curb separator.

Outside of Portland, suburban Washington County is considering curb-protected projects for the car-clogged streets outside the region’s two biggest employers, Nike and Intel. In Seattle, Amazon is paying for design and construction of a bike lane through its urban campus separated by a landscaped median.

Nathan Wilkes, a bikeway engineer in Austin, said he’s looking closely at various options for curb-style separation, including parking stops and other linear barriers no taller than six inches.

Parked cars work well at protecting bikes on long streets with few driveways, he said. But when there are more driveways, lines of sight become important.

“You end up pulling parking back from every single driveway, and then you end up with very little parking and very little barrier,” Wilkes said.

Posts have their own problems: a garbage truck can’t roll over them once a week to pick up the trash, for example.

Long Beach was one of the first U.S. cities to use curb-protected bike lanes. Photo: Joe Linton via Streetsblog LA.

Wilkes, like Amsden in Chicago and city engineer Dongho Chang in Seattle, said the main obstacle to curbs is cost.

Wilkes said he estimates that the simplest possible protected bike lane, a flexible bollard every 40 feet plus a painted buffer, would cost Austin $3 per lineal foot, or about $16,000 per mile of bike lane. Cast-in-place curbs, meanwhile, seem to cost about $50 per foot ($264,000 per mile). Precast curbs like on Austin’s Third Street: $90 per foot ($475,200).

“We’re looking for the highest quality from the cyclist perspective for the least cost and the least maintenance,” Wilkes said. “I feel like we’re still looking.”