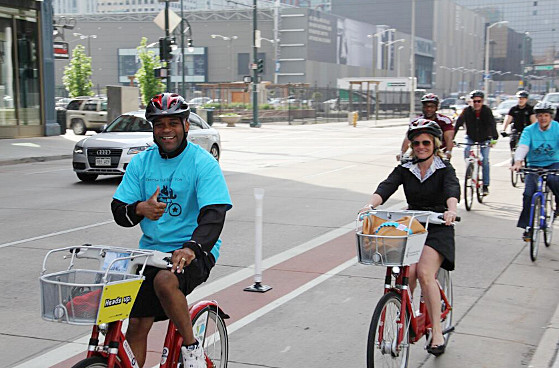 Mile by mile this spring, America’s protected bike lanes are advancing into a new and interesting type of neighborhood: the one right in the middle.

Even as protected lane designs have gained momentum around the country, the projects have often danced around the edges of central business districts: a college drag here, a trail connection there. With a few notable exceptions — Dearborn Street in Chicago is one — bike protection tends to stop where the skyscrapers begin. Space on those streets has been seen, presumably, as too valuable to be physically separated for bicycle traffic.

On Friday, Denver Mayor Michael Hancock led a ride down his city’s first physically protected lane, a 0.7-mile stretch of 15th Street that runs straight up to Civic Center Park. One block northeast is the city’s iconic downtown pedestrian mall; one block southwest, on 14th, another protected lane is in the works.

Meanwhile, in Seattle, Mayor Ed Murray announced this month that a pilot protected lane will be installed this fall on Second Avenue, parallel to its highly anticipated new waterfront and just downhill from some of the tallest buildings on the West Coast. In Pittsburgh last month, Mayor Bill Peduto said he too is aiming to add a “downtown” protected lane by September. And Los Angeles’s redesigned Figueroa corridor, that city’s first protected lane, will run just to the edge of its downtown.

Molly North, executive director for advocacy group Bike Denver, said in an interview Friday that her city is prioritizing downtown projects because it’s the best way to quickly bring a relatively complete network of comfortable bike streets to many people.

“If we really focus on our downtown, which has a lot of destinations for a lot of different people,” she said, “we then have that kind of mass of people using it. We have people that can tell stories about it.”

Scattering unconnected lanes around the city would be counterproductive, she said.

“Our community is worse off if we install a bike lane that’s not connected to the network,” North said. “If they get out on the road and the bike lane ends, then that might be the last time they get on their bike.”

One downside, North conceded, is that other neighborhoods will have to wait longer for top-notch bike projects.

“I wish we could, like, quadruple our funding and be able to serve everybody at the same time,” she said. “Just because we’re putting the protected bike lanes in downtown doesn’t mean we’ve stopped extending the network out.”

Adding lanes downtown has another benefit, of course: if they make it more pleasant to bike into downtown, the downtown will have to dedicate less space to parked or congested cars and more room to add residences, commerce and recreation.

Not to mention more room for bikes to travel comfortably. 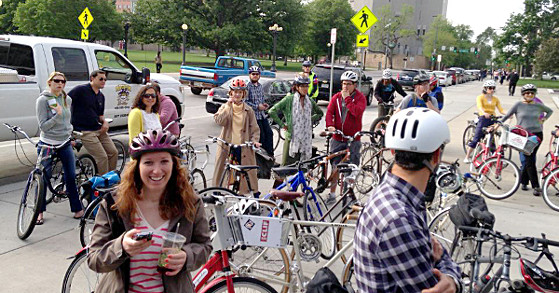