Winter has been rough on Chicago’s protected bike lanes

A fallen soldier on Milwaukee Avenue. Photo by John Greenfield.

Written in partnership with Streetsblog Chicago.

In the wake of this brutal winter, some sections of Chicago’s Dearborn Street protected bike lanes resemble a gap-toothed grin. Several of the white, plastic posts that delineate the bi-directional bikeway are missing in action.

Half of the posts that once shielded cyclists on Kinzie Street from auto traffic are gone.

And on Milwaukee Avenue, a key route northwest from downtown and Chicago’s busiest biking street, every single bollard is missing.

It’s a cautionary tale for other cities, especially those in snowy areas, about the downside of relying on plastic posts for protection. For Chicago, it’s a pressing reminder of the advantages of permanent lane separations such as curbs.

Mike Fierstein, co-owner of Ancien Cycles, which recently opened on Milwaukee to take advantage of its high bike traffic, said the bollards were wiped out by reckless motorists, snowplows, and a water main project which tore up a stretch of the street last fall. That section of road is slated to be repaved and restriped this spring.

“It seems like the posts aren’t really made to last that long anyway,” Fierstein said.

CDOT project manager Mike Amsden has said the city made the decision to start out with the flexible, plastic posts, which cost about $90 each installed, rather than more durable, but more expensive, concrete infrastructure, in order to build many miles of protected bike lanes ASAP. “There’s pros and cons to doing it both ways — quality versus quantity, honestly,” Amsden told Seattle Bike Blog in January. “The philosophy of just getting as much in as quickly as you can is great.

“That’s part of the reason the City of Chicago was able to announce this week that it has reached the halfway point of accomplishing Mayor Rahm Emanuel’s ambitious goal to build 100 miles of buffered and protected bike lanes within his first term. The Chicago Department of Transportation plans to install 20 more miles in early 2014 and design the remaining 30 later this year.

But the department has also acknowledged that damaged and missing bollards have become an issue. At February’s Mayor’s Bicycle Advisory Council meeting, bikeways engineer David Smith told attendees the bike program is aware that many of the posts are damaged, flattened, or absent. CDOT is currently doing an inventory of the conditions of the protected lanes, but doesn’t currently have a number for how many bollards need to be replaced, spokesman Pete Scales told me. 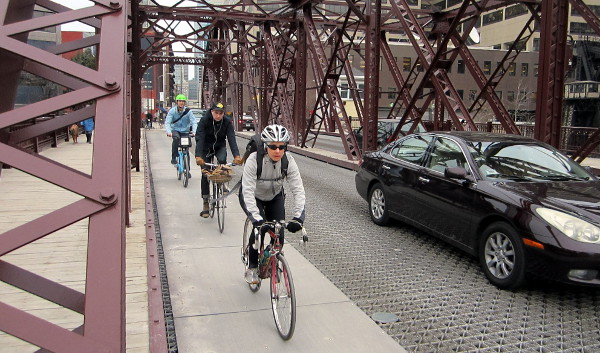 Bollards once clearly separaed bikes from cars across the bridge. Photo: John Greenfield.

Active Transportation Alliance campaign director Jim Merrell said it make sense to cut the city some slack about the damaged and missing posts. “The bollard-protected bike lanes represent a relatively new type of infrastructure on our streets,” he said. “There’s always going to be a learning curve in how to adapt operations like snow removal when a new element appears on our roadways.”He noted that this past the winter was the first one with several major stowstorms since CDOT started installing PBLs three years ago. However, he added that it shouldn’t be difficult to provide snowplow drivers with a list of PBL streets and explain where the posts are relative to the parking, so they can avoid knocking them out.

In the long term, Merrell says Active Trans wants to see protected bike lanes with more permanent infrastructure, such as curbs, planters, or grade separation, which can help prevent this type of damage, as well as give better protection to cyclists. The good news is that this has been CDOT’s plan all along. Amsden said the city is taking a two-phased approach, installing quick-and-dirty, bollard-protected lanes that will eventually be upgraded to concrete infrastructure. Curb-separated lanes are being considered for possible late 2014 or early 2015 installation on Clybourn Avenue on the North Side and State Street on the South Side, and the popular Dearborn lanes may be upgraded to curbs in the future as well.

Alex Wilson, director of the cycling education center West Town Bikes, says he’s glad the issue is on CDOT’s radar. “I’m certainly happy to see as many bike lanes as there have been,” he said. “But there’s certainly a lot left to be figured out, and many lessons to be learned from this past winter.”