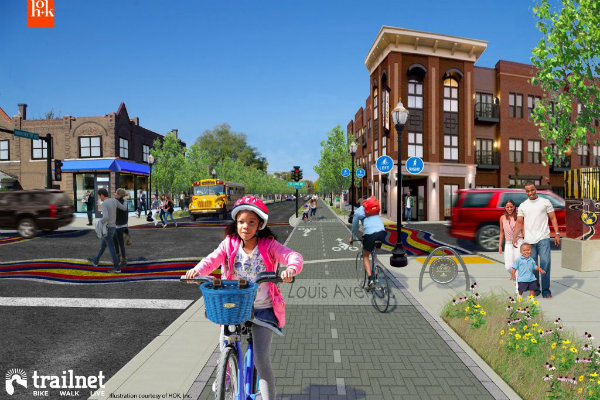 Protected bike lanes like this are designed to complement off-street paths. Renderings: HOK Inc. for Trailnet.

If you’ve got a long way to go, or nowhere to go in particular, nothing beats an off-street path.

The Danes, masters of urban bike infrastructure, have a name for the nicest of their off-street paths: “cycle superhighways.” It’s apt. For better and for worse, a great bike path is a sort of tiny freeway. (Though it tends to smell much nicer.)

Maybe this helps explain why the United States, though it’s lagged in building all-ages bike lanes, is so good at building nice bike paths. Minneapolis’s Midtown Greenway, for example, is one of the wonders of the biking world: And earlier this week, Seattle’s city traffic engineer shared this bit of bike-path perfection, a newly built stretch of the city’s Burke-Gilman Trail (check out the gently sloping curb that separates people biking and walking):

Here on the local-innovation team at PeopleForBikes, off-street paths are about to become a bigger part of our work. Next month, our Green Lane Project will finish its successful five-year mission to institutionalize the protected bike lane and our little team will advance to a new, broader program: PlacesForBikes.

Like the Green Lane Project, PlacesForBikes will focus on accelerating local infrastructure innovation around the United States. Unlike the Green Lane Project, we’ll be writing a lot about off-street paths and neighborhood greenways as well as protected bike lanes, and in particular the ways they all work together to create complete biking networks.

(The methods of the Green Lane Project, meanwhile, will live on in the Big Jump Project, a part of PlacesForBikes that’ll select 10 “focus neighborhoods” around the country and help them rapidly connect all-ages biking networks.)

On that note, here’s something that fans of multi-use paths need to keep in mind: on their own, they’re not enough for great biking.

A city of all freeways wouldn’t be a city. And a bike network can’t function without local streets, either. 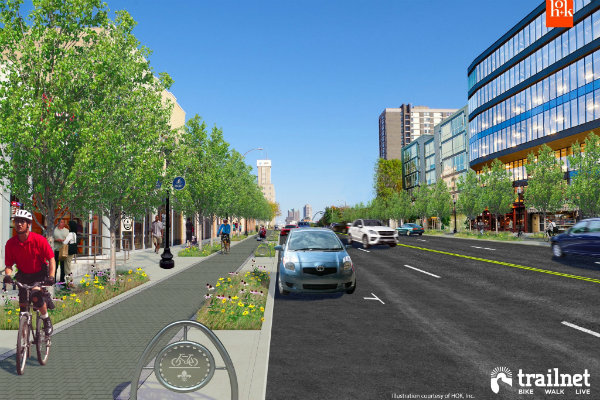 Writing today on NextSTL, Alex Ihnen explains this wonderfully from the perspective of St. Louis:

Greenways remain an important endeavor to link our region and provide recreational opportunities, but as recognized by a growing number of cities, on-street protected bikeways are much more effective at providing transportation options and connecting a city.

Greenways go past places, sometimes connecting places. On-street bikeways are paths as places, with many destinations along the way. … This is the idea of Trailnet’s recently announced effort to lead the effort to create an on-street bicycle network in St. Louis. …

The idea of a recreation path though the city remains worth pursuing, especially as the region, via Great Rivers Greenway, provides significant funding for such infrastructure. But the big idea is to make cycling and walking a practical means of moving about the city. To do this will require a paradigm shift in cooperation and leadership. Riding a bicycle must be seen as a way to get somewhere instead of a way to get away from somewhere.