A new north star in bikeway design: ‘Build it for Isabella’

Eight years ago, Portland Bicycle Coordinator Roger Geller wrote one of the most influential pieces of modern American bike-planning theory when he divided the potential transportation bikers in his city into four distinct groups. 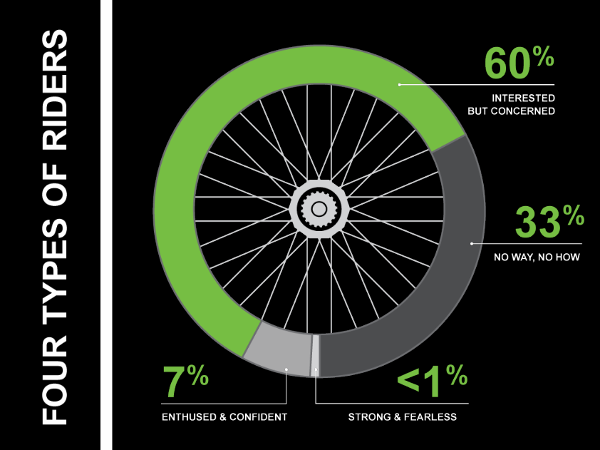 It was an antidote to one of the most common and dubious ways people think about about bicycling: by dividing the world into “cyclists” and “non-cyclists.” Because of course that’s not how things really work.  People are constantly choosing whether to use a bicycle for a trip; the fact that most Americans choose not to isn’t so much about their fundamental nature but about their culture, their resources and their streets.

Geller was just spitballing with the percentages displayed above, but they were more or less validated by subsequent academic research. And though this framework didn’t capture everything — safety and comfort are far from the only barrier to bicycling — it was a new, deeply useful way of thinking and talking about the ways infrastructure affects our choices.

But like Bob Edmiston of Seattle Neighborhood Greenways, who has created a useful riff on the concept with a character called “Wendy, the willing-but-wary cyclist.”, we think these phrases are sort of a mouthful for people outside the world of bike pros. And we also think they don’t fully capture how much is at stake on our city streets.

So we’ve been looking for a new way to capture the concept.

This summer, we found it — in a conversation with Geller.

In the eight years since Geller’s groundbreaking paper, his own infant daughter has grown up. And it was her he had in mind when he suggested, at a NACTO gathering in Chicago in June, a provocative idea: What if every new bicycle facility were built with the intent of being useful to a young girl?

If it were, wouldn’t it be good enough for the rest of us, too?

That’s why, at the Pro Walk Pro Bike conference this week, we’re launching a new concept to help guide our work.

Build it for Isabella.

Isabella (who, just to be clear, is just a character, not Geller’s actual daughter) is 12. She likes cartwheels, Instagram photos with her best friend, and ice cream cones. Sometimes she even likes school. But without someone to drive her around, she can’t enjoy those things, because of the way her neighborhood’s busier streets are built.

The ultimate goal of the Green Lane Project — and, we’d argue, of all modern bicycle infrastructure — is to get Isabella where she wants to go. 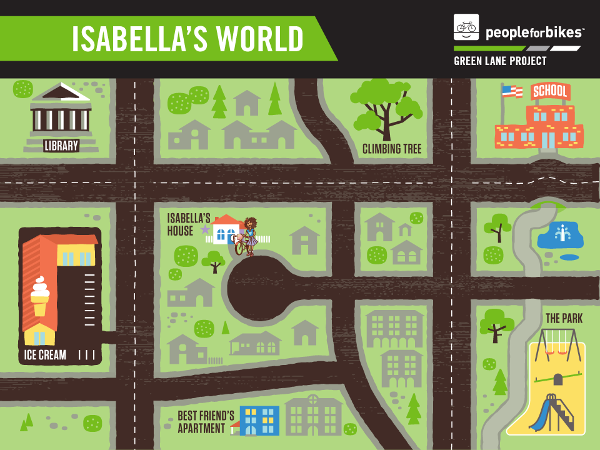 But if any new bike project isn’t good enough for Isabella, we would argue that it should have a pretty clear reason why not.

As Green Lane Project Director Martha Roskowski wrote in January, it’s time to stop building black diamond bike lanes. Painted stripes and shared lanes simply don’t serve most people. They certainly don’t serve Isabella. If we want bicycle infrastructure to stop being seen as a handout to an interest group and start being a benefit to the public at large, we need to focus on making everything we build serve the public at large.

We need to build it for Isabella. If we do, we’ll all love the cities we create.

This week we’re introducing the social media hashtag #BuildItForIsabella to refer to this idea, and we’ll be talking about it at all of our sessions and workshops in Pittsburgh about protected bike lanes, which I’ll be covering here on the site all week. Stay tuned.