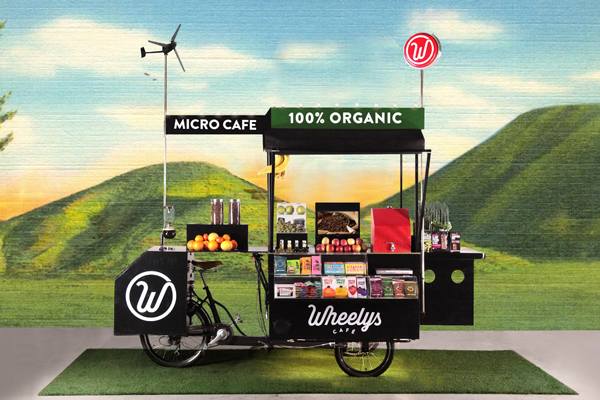 It’s the stuff startup dreams are made from. Rejected after applying for a barista job at a well-known global coffee chain, Maria De La Croix found a better gig: founder and CEO of a franchise of mobile microcafes on wheels?bicycle wheels, to be precise.

De La Croix teamed up with Tomas Mazetti and Per Cromwell to develop Wheelys, a cargo bike that expands to a sidewalk microcafe. The bike (actually a trike) is a masterpiece of thoughtful design, engineered for easy operation, leaving a minimal carbon footprint and meeting universal health code standards to ease the acquisition of vending permits. The latest model is an e-bike whose features include a solar power panel and a coffee ground composting system. The franchise agreement requires operators to use organic coffee beans and encourages the use of free-trade products as often as possible. 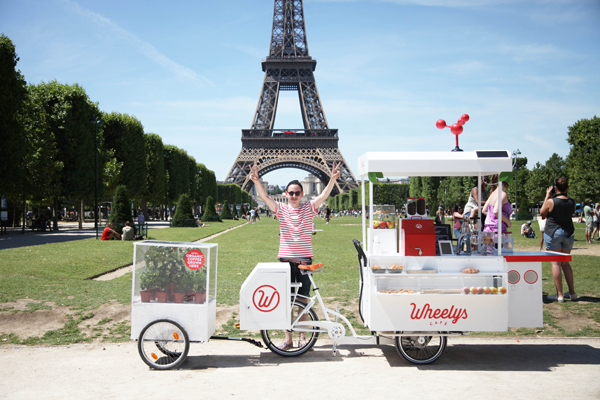 Wheelys has put the price of operating a caf? within reach for thousands of people. For a few thousand dollars, any enterprising coffee aficionado can start their own sustainable small business and be part of what is probably the first global food and beverage franchise operated solely by bike. The microcafes operate all over the world, and De La Croix says U.S. interest has been overwhelming. U.S. franchises currently open include Cleveland, Honolulu, and Milwaukee and caf’s in Miami, Orlando, Los Angeles, San Diego, and San Francisco are coming soon.

The first Wheelys were hand built in Sweden and launched in late 2014. Further models got a boost from crowdfunding, but also attracted interest from incubator funds like Y-Combinator. With a newly designed bike, the franchise is poised to expand and is in the midst of a new crowdfunded expansion on IndieGogo, where it has raised over $700,000 and generated significant media buzz.

A lot of that media, and Wheelys own site, has positioned the franchise as a rival that could one day make a bid to dethrone Starbucks. But De La Croix’s ultimate goal, she says, ?is to empower entrepreneurs all around the globe, and to do that in a green, environmentally friendly, and healthy way.?