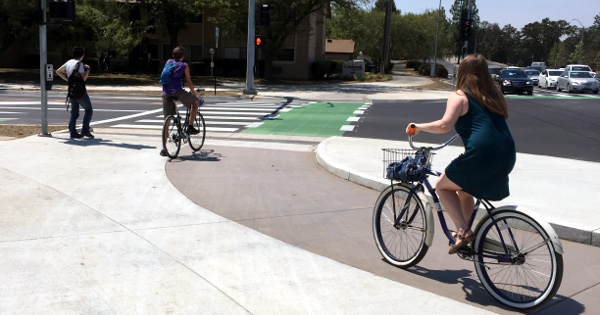 The city that brought America the bike lane 48 years ago this summer has done it again.

Davis, Calif. (population 66,000, bike commuting rate 20 percent) finished work last week on a new intersection design ordered up by a city council member who had decided that initial plans didn’t measure up to streets he’d ridden on a visit to the Netherlands.

A year later, with the help of Dutch consulting firm Mobycon, Councilmember Brett Lee’s proposal for a protected intersection has arrived at the intersection of Covell Boulevard and J Street. And as the Davis Enterprise reported Sunday, it’s working perfectly:

There were no standing diagrams on the street, no big street signs attached to traffic light poles announcing the difference between a standard American intersection and the Dutch-styled one people were passing through.

Everyone went in blind.

Yet for busy lunch hour traffic — well, for summer — on a Friday afternoon, motorists along Covell Boulevard zipped on through, with bicyclists, pedestrians and skateboarders seamlessly following their paths across the so-called “Dutch junction” — modeled after designs in the bike-friendly Netherlands.

No one died. No near misses. Nothing even close. Just history in the making no one seemed to notice.

It’s exactly what fans of protected intersections would have predicted for a design that arranges traffic so people on bikes and in cars can easily make eye contact with one another without looking over their shoulders.

Davis, it turned out, wasn’t alone in its vision. Austin has actually already built two protected intersections in a still-uninhabited part of a new development and expects people to start using them in the next few months. It’s planning two more.

Salt Lake City is currently building another and plans to open it downtown in the first week of October. Boston and Sacramento and Menlo Park are planning their own.

Why Davis’s new intersection is better

Hard to explain; simple to use.

The Davis intersection, which sits on a major east-west street at the entrance to a new mixed-use subdivision on the north edge of town, is unusual in a few ways.

The large street, Covell, offers both a multi-use path on its south side and bike lanes on its road bed. The bike lanes emerge from right-turn slip lanes at other intersections, and Donofrio said they’re generally used by faster and more confident riders.

In this version of the protected intersection, people using the bike lanes have an option to make a 90-degree turn near the intersection behind the eye-shaped corner safety island. But they’re probably more likely to proceed straight across the intersection as they would on any U.S. design. 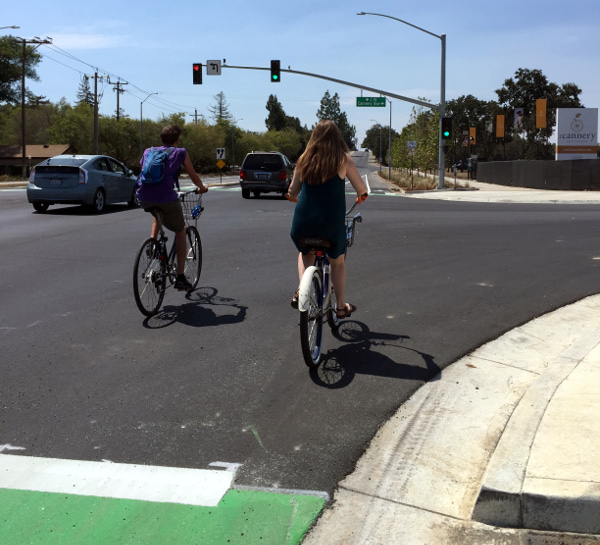 People on the multi-use path, however, are prompted to bend their path out slightly as they approach the intersection. 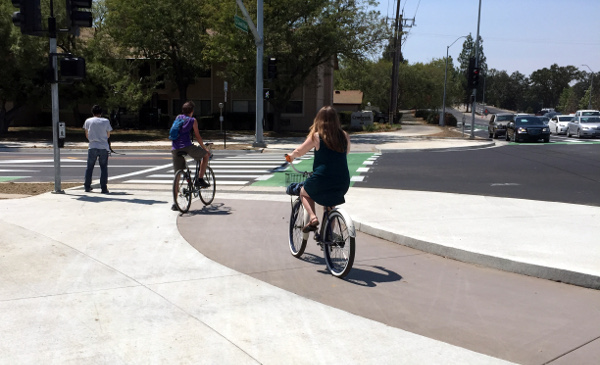 This has two big advantages. First, it gives people biking and walking a shorter crossing distance and a head start compared to people driving, so someone turning right in a car can easily see whether they’ll need to yield. 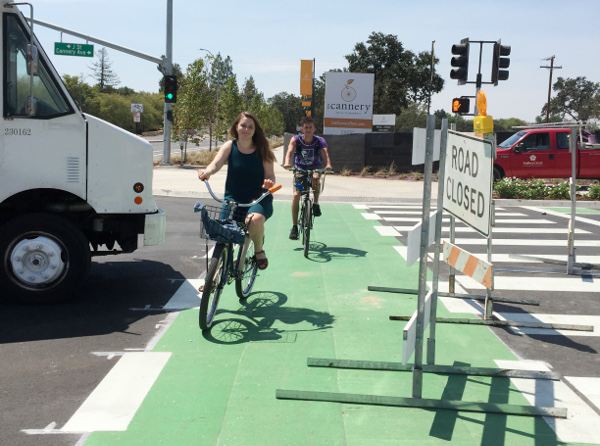 Second, the extra space is just long enough for a car to turn sideways and let other cars moving straight ahead pass behind it. The person in the turning car can see anyone crossing on bike and foot by looking straight ahead, and people in the crosswalk and crossbike can easily tell which cars are making the turn. 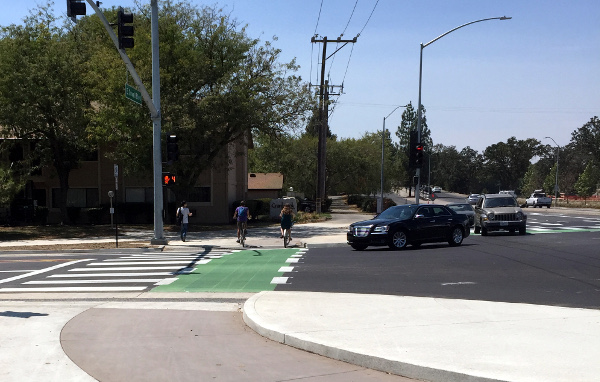 Davis’s plans predate the video made last year by designer Nick Falbo, who assembled a list of four basic characteristics of protected intersections in an American context. And it doesn’t include one of his ingredients: bike-friendly signal timing, such as giving people on bike and foot a crossing signal a few seconds before people in cars get one.

Donofrio said Davis had considered this but decided against it because the city decided the additional signal cycle time would “cause backups and could decrease the safety of other parts of the corridor.” 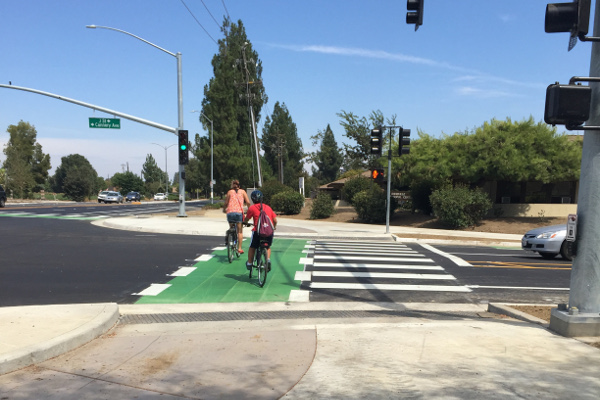 In any case, Donofrio said she’s happy the intersection is working so well so far. With another such intersection already operating in Vancouver, B.C., protected intersections will soon be operating in almost every region of North America, showing people just how easy they are to use.

“When I was out there on Friday, I saw probably six or seven bikes just in the 15 minutes I was out there,” she said. “And all young kids, too. And they were all by themselves, riding through the intersection.”