And the #1 city for everyday biking is?

December is here, and with it the end of our eight-month search for the best U.S. city for “everyday biking.” ?Everyday biking? is casual, utilitarian trips around town, and is a term we decided on thanks to input from our supporters. Once a month, since April, we?ve been sending advocates out to the streets to count people on bikes for one hour (4:30 – 5:30 PM to be specific).  Each month they counted something different: racks, cargo bikes, skirts/dresses, kits, kids, office attire and costumes. 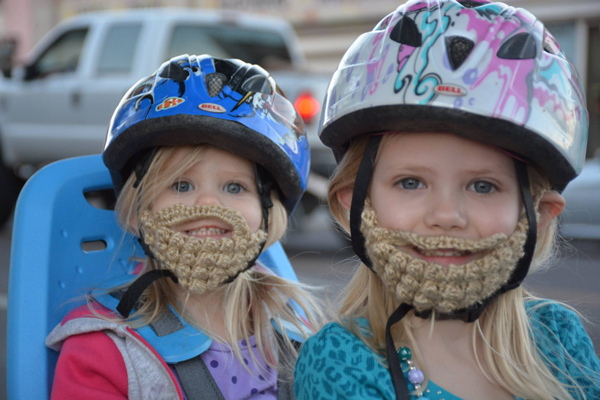 Sometimes as many as ten cities participated, as it got colder the number dwindled down to four. Last month, in honor of No Shave November, we asked our counters to search for bearded riders. Mempis, Tucson, Chicago and Portland participated in the count. Here’s how they fared.

Tucson took the final count seriously and brought out bearded riders of all types (as you can see from the photos). The counted an astounding 130 riders with beards (real and fake) in just one hour. 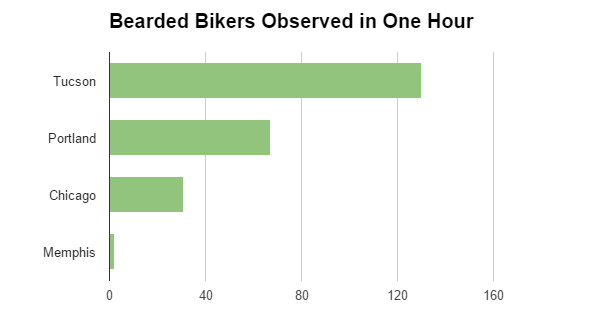 Despite impressive numbers from Portland and Chicago, Tucson’s numbers were just too large for any other city to come close when it came to the share of bikes with bearded riders. 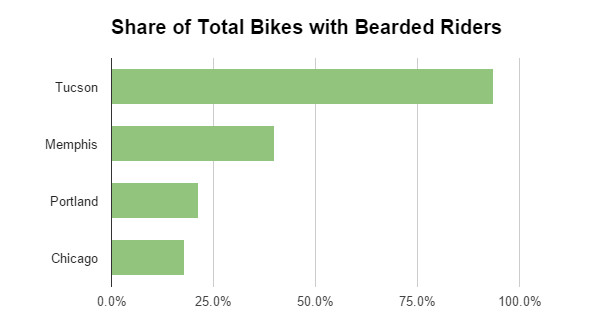 As with all our previous counts, we ultimately declare a winner by taking our two metrics (number and proportion) and grading each one on a curve. The top-scoring city in each category gets 100 points and other cities get points in proportion to their own relative scores. Then we average the two equally-weighted scores. This month it wasn’t even close, with Tucson taking the win for beards. 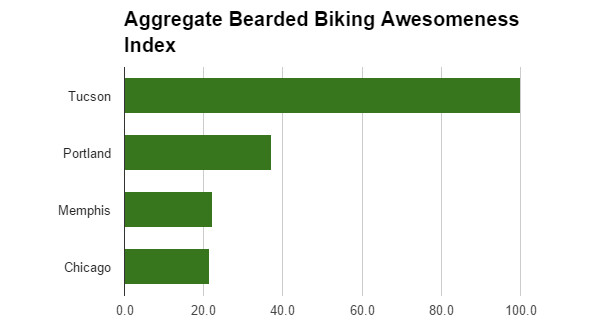 Now on to the overall winner.

We averaged the Aggregate Awesomeness from each month, giving cities a zero if they were unable to participate in a particular month. It’s worth noting that in many cases these zeros are indicative not of lack of participation, but of too much bike activity going on. Each month we were told that counting was impossible for some cities because there were other bike events taking place?from open meetings to festivals to group rides. After making and double-checking our calculations, we are officially able to declare a winner. Congratulations to Tucson, the best U.S. city for “everyday biking!” 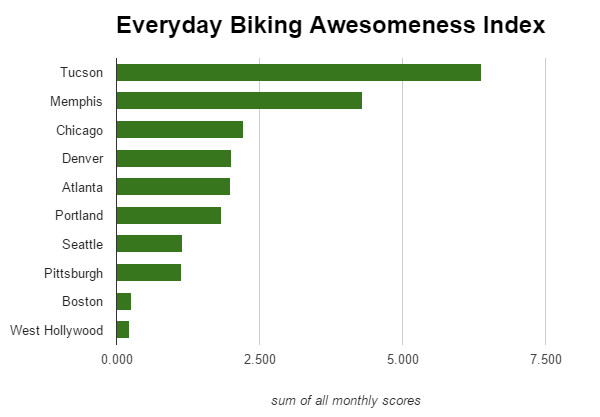 One excting outcome of this experiment was the neck-and-neck competition between Tucson and Memphis. Month after month these two cities swapped top billing.

“I think having a single rival created a focus for us,” said Evren Sonmez, program manager at Tucson’s Living Streets Alliance.

Sonmez said that enthusiasm and organization were the keys to success in Tucson, a city whose bike-commuting rate led the nation in 2000 but stagnated for years before posting some big gains recently. They posted about the counts on social media and in their monthly newsletters. “It seemed like a fun way to engage more people,” Sonmez said. “Sometimes we focus on gathering data, and this was a creative way for people to be part of the community.”

Rankings are so popular these days, media outlets are always giving awards to the top this and the best that. Initially, this was our way of being part of that trend, but we ended up getting more out of it than just a winner. We learned from this experiment that it’s not just about counting the bikes, but also about recognizing who is riding them. This experiment generated a sense of fun, rivalry and pride and allowed smaller cities to compete with those known for bicycling.

“Sometimes people don’t think of Tucson as a city where lots of everyday biking might be happening,” Sonmez said. “There are the usual suspects, and I think people keep hearing about those places. I think hopefully this project created some heightened awareness about Tucson’s everyday biking scene. We?re working pretty hard to make things better.”