At last! Feds move toward a green light for protected bike lanes 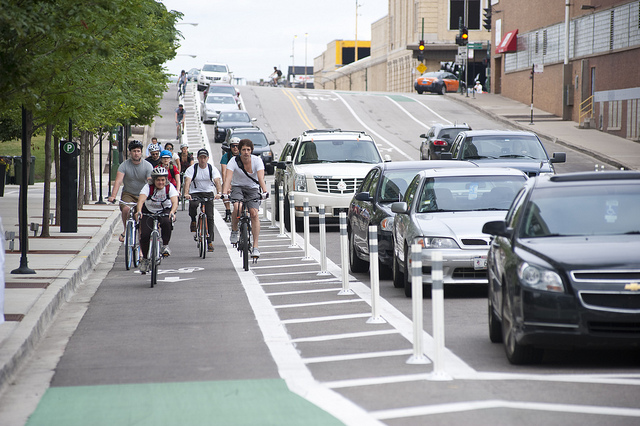 This just in: The Federal Highway Administration seems to be preparing to throw its weight behind the cycle track.

In a task order proposal request quietly circulated to selected contractors last week, the federal agency that oversees U.S. road design did exactly what many biking advocates have been urging it to do for years: It suggested that physically separated bikeways can be welcome improvements to American streets and kicked off a process intended to prove it.

“There is a growing body of research on cycle tracks in the U.S. and Canada indicating that, when they are designed well, they do not increase bike crash rates,” the agency’s document reads. “There is also growing evidence that cyclists prefer cycle tracks.”

It’s a move that could have big consequences for American cities whose traffic engineers have avoided building protected bike lanes due to a lack of federal guidance.

“This is the big thing on the technical side,” Green Lane Project Director Martha Roskowski said in an interview Tuesday. “This has been the big piece that we really need.” 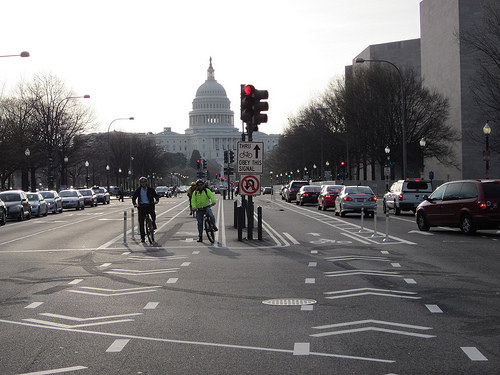 The federal request is unabashed in its assumption that when physically separated green lanes are built correctly, they will often — as in the Netherlands, Germany and Denmark — be safer.

“This research will support the goal of ensuring that protected bikeway facilities are designed to the highest possible degree of safety, while encouraging their implementation in the appropriate context,” the document says.

Technical questions about the proposal are due to the agency today. The proposal itself is due next week.

As ordered by the FHWA, the forthcoming study will look at crash rates and types at 10 to 20 locations that currently offer physically separated cycle tracks, creating a set of recommended design standards and guidelines that FHWA’s influence might eventually integrate into the two bibles of U.S. road design: the Manual of Uniform Traffic Control Devices, which discusses traffic signs, signals and markings; and the American Association of State Highway and Transportation Officials road design guide, which discusses the shapes and materials of safe roadways.

By looking closely at new data, the federal government will be advancing a longtime dispute over the merits of cycle tracks.

John Forester, a bicycle advocate who opposes separating bike and auto traffic, said in an interview Wednesday that studies showing that cycle tracks increase safety are built on poor scholarship. Federal guidance on cycle track design would only be welcome, he said, if it concludes that they’re only beneficial “where there’s absolutely no cross traffic for miles and miles and miles.”

But John Cameron, chief engineer for the City of Memphis, disagreed. He said he would welcome a federal stamp of approval for a cycle tracks, which he’s concluded can make biking more popular without compromising safety.

After seeing protected bikeways in action in Europe, Cameron said he realized that thoughtful intersection designs and the use of markings such as green paint can overcome the complexities that separated bike lanes create, resulting in streets that more Americans will enjoy biking on.

“Certainly engineers can come up with a thoughtful design for each intersection,” Cameron said Wednesday. “It’s going to take some time for both motorists and bicyclists to get used to this new concept. … It’s been an educational process for me over the last five years or so.” 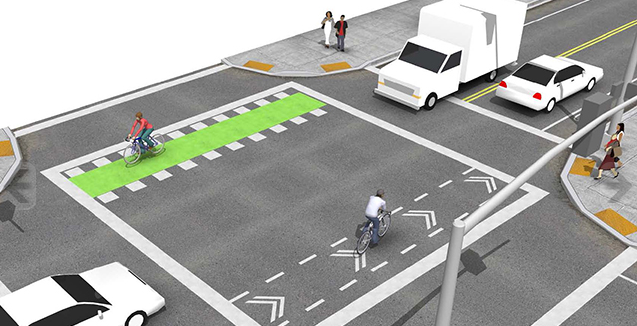 As we’ve been reporting here for the last year, cities from San Francisco to Memphis to Lincoln, Neb., are already installing protected lanes with technical advice from a new multi-city organization, the National Association of City Transportation Officials.

A 2013 Bikes Belong survey of city officials agreed, with 88 percent of respondents wishing for guidance from the federal government on protected bike lanes.

The study is expected to be complete within one year of its award — a brisk pace for federal change.

Roskowski called it a sign of political direction from departed Transportation Secretary Ray LaHood and new Secretary Anthony Foxx, “responding to fairly quick evolution in transportation in the United States.”