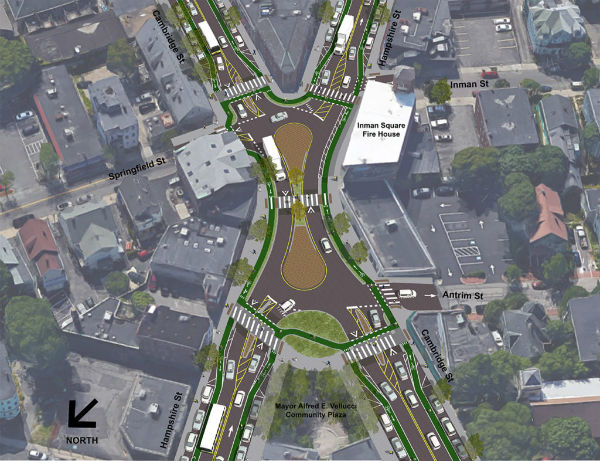 Wickedly good biking ideas continue to pop up in Massachusetts.

On Tuesday, the Boston Cyclists Union shared the inspiring back story behind a new concept for the long, complex seven-way intersection created by the acute crossing of Cambridge and Hampshire streets. Like a lot of good ideas in modern American bicycling history, it involves Anne Lusk, a Harvard public health professor who’s been a major brain behind the spread of protected bike lanes in the United States. Last summer she connected BCU with engineering firm Kittelson and Associates, and dominoes started falling:

In mid-September, Bike Union executive director Becca Wolfson and representatives of Kittelson met with City of Cambridge staff to present our findings regarding the feasibility of the peanut design and the conceptual rendering for it.  The City had considered and rejected as infeasible a roundabout solution for Inman, but had not considered a peanut-style mini-roundabout.  The staff were favorably impressed and have since indicated an interest in including this roundabout approach alongside the “Bends” solutions as the pubic process moves forward.

In his post, BCU writer Steven Bercu lists the various advantages of this design for people walking, biking and driving. Here are the benefits for bicycle travel:

Bicycles can move through the Square with minimal or no stopping and minimized deflection.

By elevating the cycle tracks and using European-style protected crossings, those traveling by bicycle will be much more visible to drivers; oblique or unexpected crossing angles are completely eliminated.

It gives Cambridge the chance to be a leader and innovator by installing a first-in-the-nation roundabout with protected bike lanes — something we have yet to see implemented in the U.S.!

That’s true: though the country has a handful of protected intersections, all use the right-angle design, usually with a stoplight, that’s standard in the U.S. (That’s likely to change soon with or without Cambridge, though — keep your eyes on Carmel, Indiana.)

Whether or not the “peanutabout” turns out to be right for this particular intersection, diagonal streets are common in U.S. cities. This looks like a tool that deserves to be on the country’s belt.