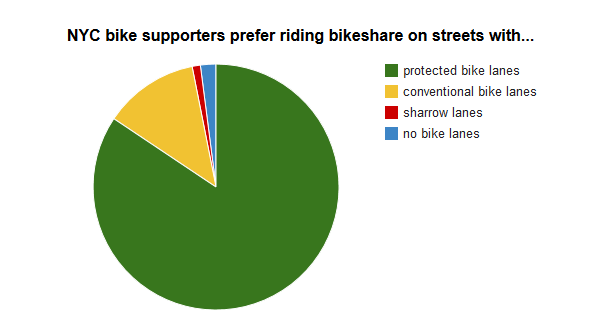 As we’ve written before, protected bike lanes and public bike sharing go together like peanut butter and chocolate.

Both tools appeal to new bike riders by removing key barriers to biking: having access to a well-maintained bike the moment you need one, and feeling safe once you’re riding. Each helps the city make the most of its investment in the other.

Today, a new poll from New York, the U.S. city that’s been using both tools in a big way, added the strongest evidence yet that people who like bikes feel this way. Circulated by Transportation Alternatives, the city’s whip-smart advocacy organization, the poll asked thousands of people on Transalt’s multimodal email list which type of facility they preferred to ride in.

As you can see above, a whopping 84 percent said protected lanes were the best.

She said the narrow conventional bike lanes on Fifth and Sixth Avenues in Manhattan, “two of the most-biked streets in New York City,” are a case in point.

“You have all these new Citi Bike riders — and I see them every day in my commute — riding very closely against the parked cars,” Samponaro said. “That little teeny painted bike lane offers folks on bikes the hope of a safe space. But also it’s misleading, because we know that if you ride too close to parked cars, you’re going to get doored.”

Transalt is following its initial “flash poll” with a series of other quick web surveys designed to gather more detailed information about the CitiBike experience and how it can improve. If you’ve ridden a Citi Bike, you can take part here. And if you just wish your town were using these tools more, you can take part by sharing these compelling results with someone who might be interested.