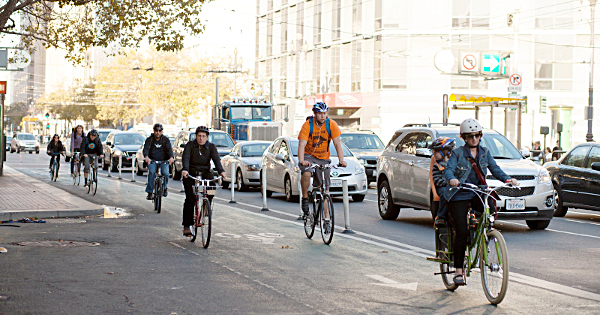 The gap between rich and poor keeps widening in the United States, but bicycling cuts across that divide.

As part of our project to explore the connection between transportation equity and protected bike infrastructure, I’ve been digging deeper into the difference between (as Veronica Davis put it last month) “biking for transportation and biking for biking.” And because good biking is such a useful part of a system that frees low-income people from the pressure to prioritize car ownership, we’re especially interested in the ways this differs among people of different incomes.

Here in the States, the best data we have on this question comes from the National Household Transportation Survey, most recently in 2009. Here’s what it tells us about the household incomes of people who are taking bike trips for non-recreational transportation:

And for recreational trips (which, to be clear, probably includes both riding for fun and riding to meet a friend for lunch):

Though there’s a slight slope to both of these charts — the poorer your household is, the more important bike transportation tends to be to you, while the richest households are the most likely to take a recreational bike trip — there’s plenty of income diversity on both, most impressively on the recreational one.

You may have noticed something else about this data: the Y-axis. In every category listed here, fewer than 1 in 50 trips is happening on a bicycle.

What would these charts look like in a country that has used protected bike lanes and other infrastructure to make biking safe and comfortable? I’ll be sharing that comparison (for what I think may be the first time ever) in an upcoming post.