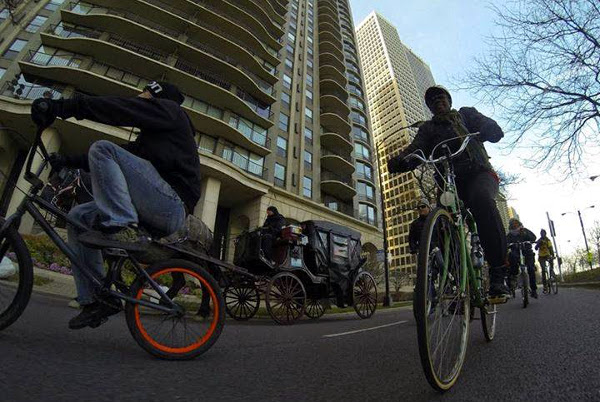 A co-founder of the new Slow Roll Chicago is one of three Chicagoans who sent the city and state an open letter calling for equitable bike infrastructure and programs. Photo: Slow Roll Chicago.

Almost no major U.S. city has a better-connected system of protected and buffered bike lanes than Chicago.

But if you look at a map of the city’s impressive progress, you might notice a pattern in the network that looks disturbingly familiar to any Chicagoan:

Green are protected bike lanes, blue are buffered lanes and red are planned for lanes in the near future. Map by Active Transportation Alliance.

Though the disparity in advanced bike lanes isn’t as clear as for non-buffered lanes or Divvy bike share stations, the northern routes out of the Loop form a more or less connected network, while south and west side improvements have been more dispersed.

This week, a group of black Chicagoans politely called bike infrastructure disparities what they are: unfair.

They also made a list of specific requests that could fix them.

We are advocating for the equitable distribution of bicycle infrastructure, education and bicycle-related resources that adequately and thoroughly serve the bicycle needs of Black Chicago especially in predominantly Black communities on the Southside and Westside of our City, by respectfully asking the City of Chicago, the State of Illinois, and the various transportation advocacy organizations operating in the City of Chicago to make a publicly stated priority the both short- and long-term advancement of an equity agenda as related to bicycle infrastructure, education, and resources in the City we all dearly love.

We advocate on behalf of vibrant, bikeable Black communities in Chicago to achieve equity in the livability of our communities allowing us to have greater access to all of the various inherent benefits of robust bikeable neighborhoods. We envision predominantly Black Southside and Westside neighborhoods that are healthier, safer, more economically thriving, and more socially cohesive as a result of greater bikeability in these neighborhoods contributing to improving the condition of our communities. 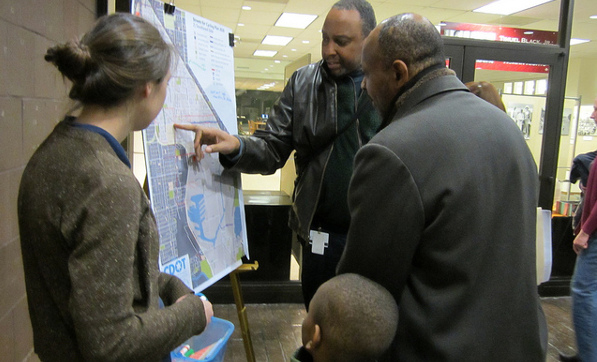 Peter Taylor of Friends of the Major Taylor Trail, in 2012. Photo: John Greenfield.

The coalition — made up of Oboi Reed of Slow Roll Chicago, Red Bike & Green and Southside Critical Mass; Peter Taylor of Friends of the Major Taylor Trail; and Shawn Conley of the Major Taylor Cycling Club of Chicago — went on to make seven requests, among them:

Prioritizing bike plans based on neighborhood advocacy isn’t quite as simple as it might seem. If a city were to add bike amenities only to areas where residents actively lobby for them, it would systemically ignore neighborhoods where few bike users are organized advocates, even if many people might be bicycling there.

But in this case, Reed, Taylor, Conley and their supporters are doing more than just advocating for bikeways through neighborhoods they happen to personally care about. By warning that black neighborhoods are at risk of underinvestment, they’re arguing that this problem should matter to every Chicagoan. It’s an argument they’ve been making for years.

“The lion’s share of the resources are going to go downtown and to the North Side,” Reed predicted in 2011 in an article published by the New York Times. “The South and West will only see a sprinkling.” 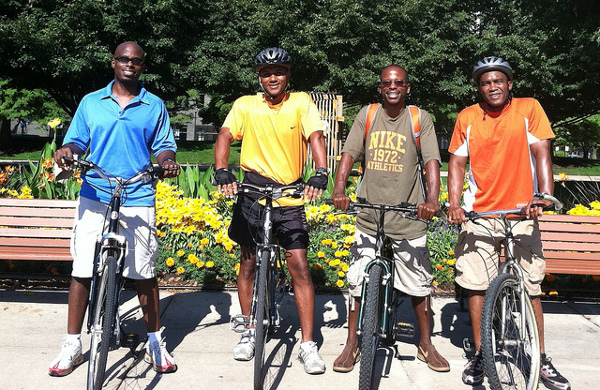 Oboi Reed in 2011, second from right, with his earlier biking club the Pioneers. Photo: John Greenfield.

However you feel about the outcomes over the last three years, it’s fitting that the leaders of two groups named after Major Taylor were among those to call this question. One of the country’s first athletic superstars, he finished his life in Chicago and was buried there in an unmarked grave. (The Schwinn family later donated a headstone.)

In an 1894 letter to a popular bicycling magazine, the 15-year-old future cycling world champion reflected on what it meant to him and to other black Americans to be denied membership in the country’s largest bicycling organization.

“As cyclists we are still young, but as pleasure seekers we are old,” he wrote of black bike lovers at the time. “We want nothing from from south, north, east, or west but that which we are entitled to.”