Last week, we shared a new report about the best practices for cities that want to make faster, cheaper changes to their streets.

Today, let’s take a moment to recognize the North American city that has used these tools better than any other to rapidly improve local bicycling.

The city is Calgary, Alberta. The secret is that it piloted a connected downtown network of low-stress bike routes all at once.

As the graphic at the top of the post shows, the results have been large and almost immediate. Weekday bike counts on the affected corridors soared 95 percent in September 2015, three months after the network opened, compared to the year before. The proportion of those riders who were female jumped from 20 percent to 27 percent, and younger people are reportedly riding downtown more, too.

“It seems like we see a ton of families out riding the tracks,” said Tom Thivener, projects coordinator in the livable streets division of Calgary’s transportation planning department.

The all-at-once approach to the project was proposed by Calgary Mayor Naheed Nenshi.

As spring creeps back to the Canadian prairie, it’ll be worth watching to see if those numbers keep growing. Skyrise Cities reported last week that the pilot project lasts through December 2016.

Maybe most heartening: Calgarians say they like the projects. Despite a very close city council vote to create the network, once the public saw it in action, 64 percent decided they approve. 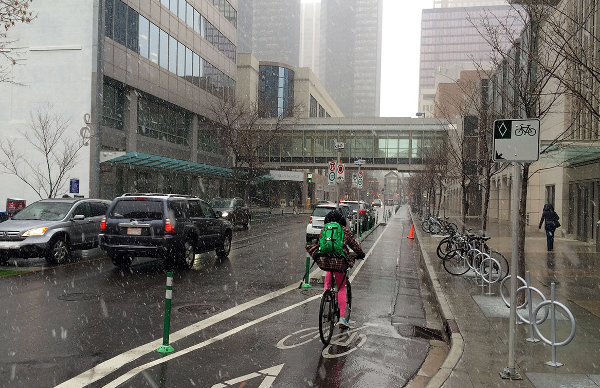 That’s the power of a connected low-stress biking network: once people can easily get to many different locations on a bike, bike lanes stop being an abstract concept (“CARS VS BIKES”) and start being a functional, practical system.

Most cities are a long way from having a “minimum grid” of low-stress bikeways, as some people like to call it. That’s why a quick-build program, which rethinks bureaucratic procedures to make transportation projects faster, cheaper and more flexible, can be so useful.