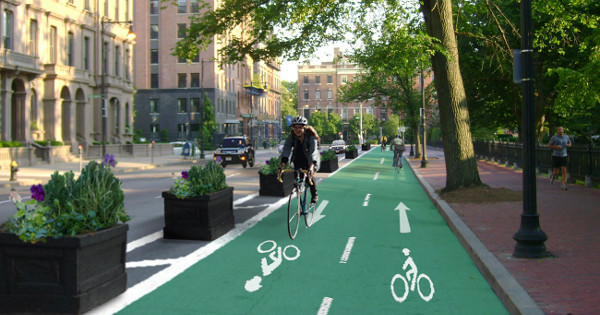 A rendering of a protected bike lane being used by Charlotte biking advocates to explain the idea. Rendering by Jessi Flynn.

Cities compete. And in the cities of the American Southeast, keeping up with one’s peers now means using protected bike lanes on busy streets to bring bicycle transportation into the mainstream.

On Monday, a massive petition and letter-writing campaign helped make Charlotte the latest city to set a downtown protected bike lane effort in motion after 3,000 people contacted the city council to express their support for the idea, which could seamlessly link Charlotte’s Irwin Creek Greenway and Little Sugar Creek Greenway paths to one another and to central-city destinations.

It’d be a textbook use of protected bike lanes to close a gap between other parts of a city’s high-comfort network. In a city whose population understands networks — how the value of every point on a network rises exponentially as networks grow — that’s evidently something lots of Charlotteans can get behind.

Here’s part of what Jordan Moore, the local bike advocacy organizer for Sustain Charlotte, told the council Monday. He was backed by “over 50 local residents,” many carrying their helmets or handmade signs:

Protected bike lanes are common practice now internationally, nationally, and regionally.  Cities whom we compete with ? Memphis, Chattanooga, Atlanta, Asheville and Raleigh — have all begun construction of or adopted plans to add these facilities to their transportation network. …

By connecting this lane to our greenways, we’d be connecting our leadership to our greatest challenge. Safe places for people to use their bicycles means a positive turn for social and economic mobility. Memphis, a city that has historically existed in the heart of economic hardship, is now telling a story of cultural preservation and neighborhood revitalization because of protected bike lanes.  We should want to tell that story for Charlotte. …

Typically, the council does not respond to citizen requests during the Citizens’ Forum portion of their meetings. However, Mayor Roberts pointed out that she and the rest of Council received a large number of emails in support of our campaign and that it therefore deserved a brief response.

Council Member Kinsey expressed support and made a motion to refer this request to the Transportation and Planning Committee.  Council Member Autry also requested that funds be allocated specifically for bicycle and pedestrian projects when the City drafts their budget for next year!  Council Members Eiselt, Lyles, and Phipps also expressed their support for our request.

Then, unanimously, they voted in favor of Kinsey’s motion.

Back in March, when Moore was beating a local media drum for protected bike lanes through Uptown, we wrote that until people understand changes as part of a big goal, they’ll rarely be willing to make sacrifices for the greater good of their city.

Fortunately, Moore and his colleagues don’t lack for vision. Moore is already describing it as the first step in a connected biking network that would help more people cut transportation costs and move around safely.

“People would be able to use the Blue Line, the Gold Line, buses, and the Cross Charlotte trail to access our city’s economic, civic and cultural core,” he said Monday.

But Moore hopes he won’t have to do nearly as much explaining after the city’s first protected bike lane is installed.

“I promise you this, if you focus your energy this year on getting this ONE in place, I am convinced that next year I won’t have to ask for more,” Moore told the council. “That protected lane will speak for itself. I won’t have to say a word. People will be riding on it and they will be connected, and they will love it.”

The Green Lane Project is a PeopleForBikes program that helps U.S. cities build better bike lanes. Our next phase is the Big Jump Project, which will select 10 very different neighborhoods and districts and help them quickly connect biking networks. Find out how your city can apply here.