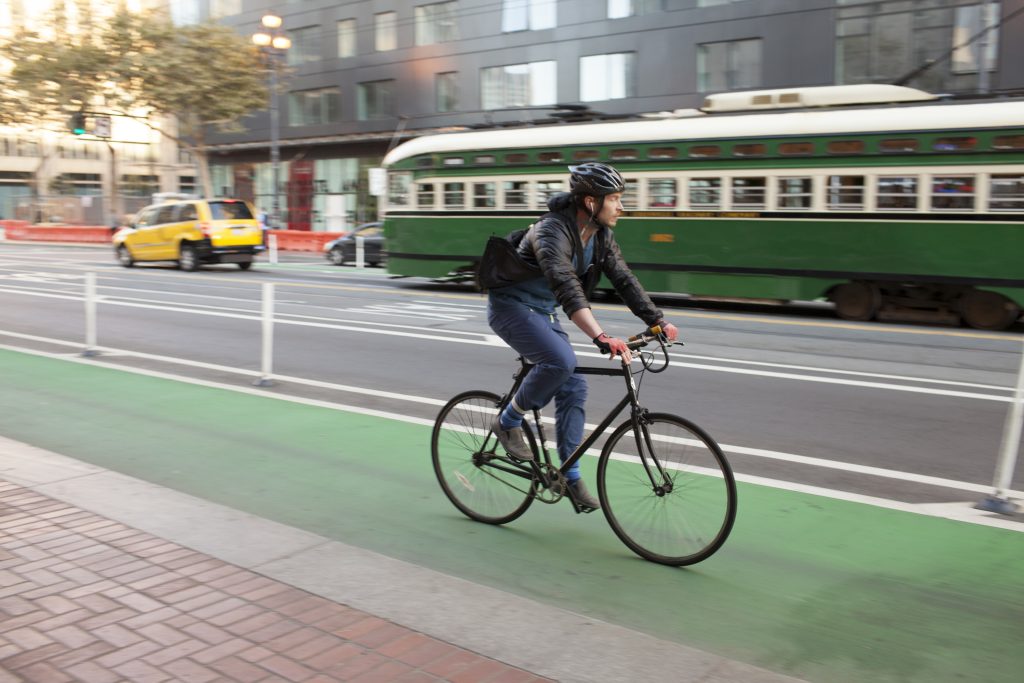 By April 2020, more than 200 U.S. cities changed the layout of their streets by eliminating through traffic, slowing cars and opening roadways for people of all ages and abilities to comfortably enjoy the outdoors while city parks, fitness centers and schools were closed due to the COVID-19 pandemic.

Data from PeopleForBikes’ new Business Intelligence Hub estimates that 9% of American adults recently rode a bike for the first time after a year or more, and that 36% of riders with children took their kids out for their first ever bike ride or took up riding more often. Trail and bike lane rider counts from around the U.S. indicate that Americans are consistently riding more this year than last.

In spite of the measured increase in biking, local officials now tasked with the phased re-opening of business, retail and community events are weighing the future of these temporary street changes with increasing pressures to provide on-street parking, create new drive-through services and re-open travel lanes as cars return to streets.

Some cities are turning to new bicycling networks as a permanent way to safely move people around during and after the COVID-19 pandemic. Pop-up bike networks in Berlin, Bogota and Paris proved early on these recovery networks are low-cost, sustainable methods of connecting people to the places they want to go.

Now, as Americans grapple with the realities and challenges of reopening, these permanent networks are taking shape in U.S. cities:

Back to School Without Buses

In Fort Collins, Colorado, the Poudre Valley School District’s estimate that buses will only be able to operate at 10% of normal capacity is causing the city to strategize how to get the remaining 90% of students to school without adding more drop-off traffic to already congested roads. The city will enhance its 200-mile, low-stress bicycle network (which already includes safe arterial crossings and protected bike lanes) with new wayfinding systems, maps and communication tools to help caregivers and students navigate safe pathways to local schools.

Like many cities, Tucson, Arizona piloted a Slow Streets program during the pandemic which temporarily closed some streets to all but local traffic. As the city carefully approaches recovery in its phased re-opening, residents are asking that these street closures become permanent. The Tucson Mayor and Council approved $1.4 million in federal CARES Act funding toward expanding the Slow Streets program with permanent changes like new crosswalks, repair of sidewalks, bike lane striping and traffic-calming measures like traffic circles, bulb outs and speed humps to 20 miles of streets across the city.

New Networks for Returning to the Office

In Austin, Texas, Congress Avenue is considered the “Main Street of Texas,” with views of the Texas State Capitol, historic architecture and direct connections to both the natural and urban spaces of the city. In anticipation of increased bike commuting during the phased re-opening of downtown Austin’s employment center, City Council approved temporary protected bike lanes along Congress Avenue that don’t affect existing parking or access to local businesses, but still offer people safer and more comfortable spaces to travel by bike. The temporary protected bicycle lanes will be in place as long as necessary and the city is considering how to make these installations permanent when social distancing is no longer needed.

Biking and walking are among the safest and most accessible forms of transportation, and based on a recent poll conducted by PeopleForBikes, policymakers can count on nearly 80% popular support for the building mobility networks that help people move around on two wheels today and sustainably into the future.