Congress and bikes: What’s going on and why it matters to you 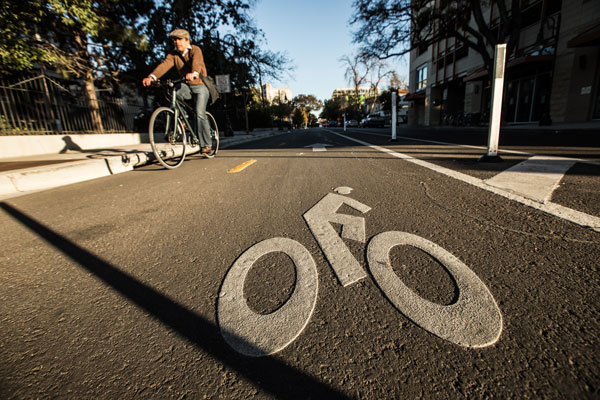 The Highway Trust Fund, the bank account that pays for things like highways, roads and bike lanes, is running low on cash. The transportation bill that dictates how that money is spent is called MAP-21 and it expires at the end of May. This means that over the next month and a half, Congress needs to figure out if they’re going to pass the transportation bill with a quick fix or figure out something that will solve the problem long-term.

One of the programs in the bill, called the Transportation Alternatives Program (TAP), is the number one way that bike infrastructure is paid for at the federal level. As the number of people who bike continues to rise, we think it’s important that communities have the option to include bike infrastructure in their construction projects. That’s why PeopleForBikes is working to make sure TAP stays in the bill.

The current federal surface transportation authorization and funding, MAP-21, expires on May 31, 2015. At the same time, it is estimated that the Highway Trust Fund which funds the program will have more obligations than receipts. Under this scenario, without action by Congress, the U.S. Department of Transportation would have to slow down reimbursements to states. The Highway Trust Fund’s principle funding source is a 18.4 cent per gallon excise tax. Since 2008, the amount of money obligated to the surface transportation program has been greater than the amount generated by this tax, leaving the program underfunded. To make up the difference, Congress has passed a number of short-term patches to the Highway Trust Fund. As Congress considers reauthorization of MAP-21, identifying a long-term funding solution or short-term fix to the Highway Trust Fund will be a top priority.

The Senate Environment Public Works Committee and the House Transportation and Infrastructure Committee are the committees with jurisdiction over surface transportation policy in Congress. They have both indicated that passing a long-term reauthorization and identifying a long-term funding source for the Highway Trust Fund are top priorities. In fact, both committees have started holding a series of hearings to hear from a variety of witnesses about their priorities for reauthorization.

Last week, the House Transportation and Infrastructure Committee held a hearing where North Carolina Governor Patrick McCrory, Salt Lake City Mayor Ralph Becker and Wyoming Department of Transportation Director John Cox all testified, giving each the opportunity to share their priorities with members of the committee. Mayor Becker, as well as a number of other members of the committee, highlighted the growth in demand for bicycle infrastructure. He specifically mentioned the growth in Americans who primarily bike to work and see bicycle infrastructure as a critical part of solving a community’s transportation challenges.