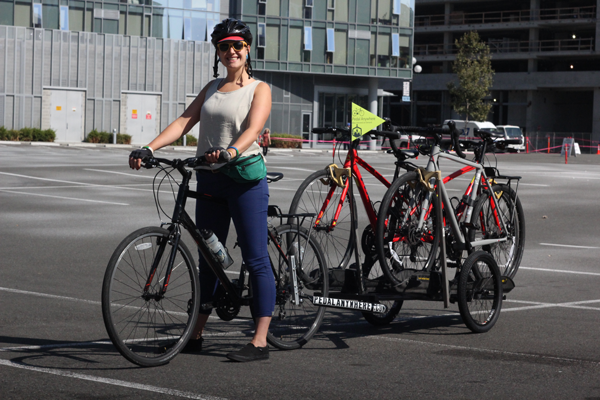 Your plane pulls up to the gate. You hit a few buttons on your smartphone to reserve a bike and grab your panniers. By the time you’ve finished checking in to your AirBnB a couple of hours later, the bike arrives. The next morning you’re ready to ride off into the Cascade Mountains for days of spectacular light touring. Back in town at the end of the week, you lock up downtown, message the rental service the exact location and head home.

Pedal Anywhere‘s customers do this, or variations of this, a lot, says owner Zach Shaner. Co-founder Lucas Nivon saw small-scale success offering long-term bike rentals on Craigslist before recruiting Shaner to expand and re-launch the Seattle-based business in 2014. ?We decided we were going to make delivery the value proposition of the business,? Shaner says.

It’s easy to see that value, particularly for everyday cyclists who, whether traveling for business or pleasure, want an easy way to ride a good quality bicycle while they’re away. On-demand simultaneously eliminates the need to vet which local shops offer rentals, liberates travelers from bikeshare service boundaries and time limits, provides a quality bike at a good price, and eliminates costly shipping or airline fees as well as the hassle of disassembly and reassembly.

In the last few years, similar operations have popped up around the country. In Washington, D.C., Sega Songha started Bikes to Borrow as a three-bike (small, medium, and large) side business in 2006. Josh Zawacki launched Joyride NYC with a fleet of 35 bikes in 2012. All three offer a mix of high-quality mid-range hybrids and road bikes. Pedal Anywhere gets a good deal of customers who grab a bike in Seattle and do one-way tours to the Bay Area or elsewhere, shipping their rentals back (at their own expense) at the end of their trips. Business travelers in D.C. flock to Bikes to Borrow, but so do a lot of locals who, for whatever reason, prefer to rent rather than buy their own bikes. European tourists are particular fans of Joyrides’ higher-end road bikes. (Several outfits in California started offering variations of the service around 2012.)

While the logistics of delivery can be challenging, forgoing a retail storefront to deliver out of a warehouse keeps costs down. So does using ever-evolving software to manage reservations, waivers, and inventory. ?With a real-time system, somebody can make a reservation, it comes out of inventory, it’s all right there,? Songha says. Joyride delivers via truck, Bikes to Borrow by electric car, and Pedal Anywhere uses a combination of custom-upcycled bike trailer and electric car.

The delivery-based bike rental model is well-established for large events and group rides. Why have on-demand services emerged only more recently? ?We fit into the instant delivery ecosystem you’re seeing with Amazon Prime and Uber and Postmates,? Shaner says. Now that people use on-demand for just about anything, the time is right, Zawacki says. ?Whatever it is, food, clothes, it’s just become what we expect, especially in New York City. It’s the convenience.? The economics are compelling, too. ?There are businesses delivering $3 dollar burritos all over town. But we’re delivering a $100 product where we can make a margin while still being cheaper than most products out there,? Shaner says.

These operations remain relatively modest: fleets range from 35 to 80 bikes, and add only a handful of employees seasonally. But all appear poised for expansion. Songha has his eye on an electric van to help manage an expanding fleet, and has received requests to launch in other cities. Joyride’s Zawacki plans a ramp up of online marketing. Shaner is weighing adding e-bikes or folding bikes. ?We don’t want to take over the world,? Shaner says. ?We just want to make it easy to pedal anywhere.?