The City of Halifax didn’t have a plan for a connected protected bike lane network, so advocates simply made one themselves. (All images: Halifax Cycling Coalition.)

For biking believers both inside and outside of government, the playbook has become familiar.

Lobby city planners to make a bike network plan. Get it funded. Make it as forward-thinking and ambitious as possible. Once you’ve drawn a bunch of lines on the city’s official map, select the most important projects and start to fight political battles street by street, compromising every step of the way with those who argue that biking facilities don’t need to be that common or that comfortable or that direct — forcing elected officials to weigh the needs for this parking lane or that turn lane one block at a time.

It’s a time-tested strategy, and it can certainly get results. But this winter in Halifax, a handful of volunteer biking advocates decided to try turning the process upside down.

Working on their own time over two long evenings with a clipboard and a survey wheel, Ben Wedge and Matthew Eronoa mapped an entire 23-mile protected bike lane network themselves from the street up.

Then they spent several months compiling their measurements into a remarkable 39-page document that spells out exactly what the city would need to do to create a complete, connected biking network suitable for all ages.

A protected lane on Oxford Street? North of Coburg, they wrote, all you’d need is a standard 4-to-3 conversion with a new center turn lane, and south of Coburg you’d eliminate half of the on-street parking.

What about Sackville Street? Just narrow the travel lanes west of Brunswick and square off the intersection at Bell, plus you can can even add 30 new street parking spaces. 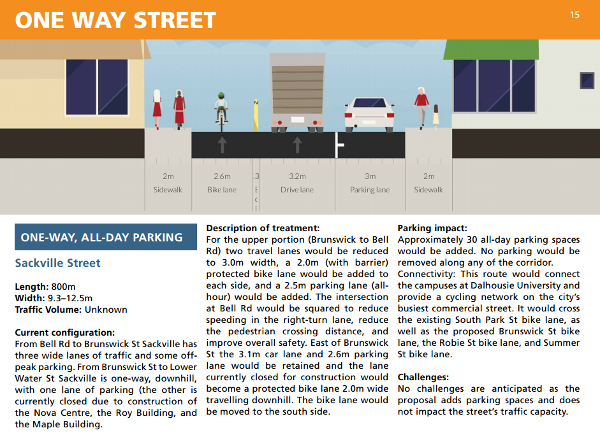 The plan, which they called “On Track for 2020,” is complete with information about traffic volumes and, for each street, a brief summary of the connectivity benefits it would offer to Halifax’s theoretical all-ages biking network.

Another 40 miles of comfortable bikeways would also be added, they note, with a neighborhood greenway-like system to calm traffic on residential side-streets. The result would be a connected all-ages biking network — or, as Toronto urbanism advocate Gil Penalosa likes to say, a “minimum grid.”

Wedge, Eronoa and several other volunteers led the project under the auspices of the Halifax Cycling Coalition, an all-volunteer advocacy group with 250 members and 30 active volunteers, including David Jung, the pro bono designer of the final report. Staffers from three other local nonprofits offered peer reviews of the plan before publication. 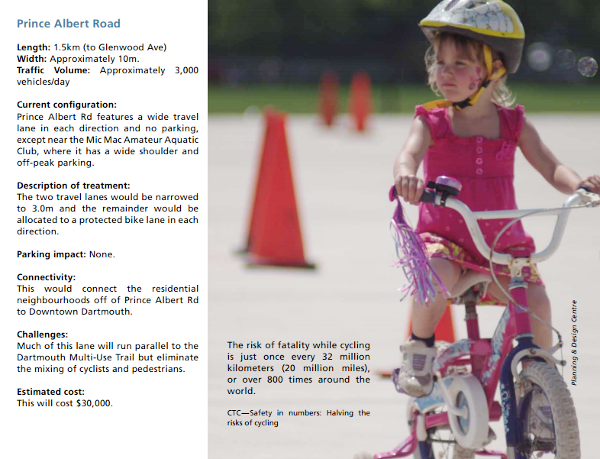 Wedge, the coalition’s co-chair, said the process began after many cases of being told that Halifax simply lacked the space for protected bike lanes.

“We essentially set out to say look, it can be done, here are the tradeoffs,” said Wedge, 25. “It just kind of spiraled and we said, why don’t we just grab a survey wheel and go out and measure all the streets. Because the city doesn’t actually know.”

“I’m an engineer,” said Wedge, who works as an industrial engineer for Barrington Consulting. “I’m not going to stamp that, because I didn’t pull out proper survey equipment.”

But he said it’s helped advanced the conversation from a vague “that sounds difficult” to more productive discussion of the costs and benefits.

“It’s a conversation-starter,” he said.