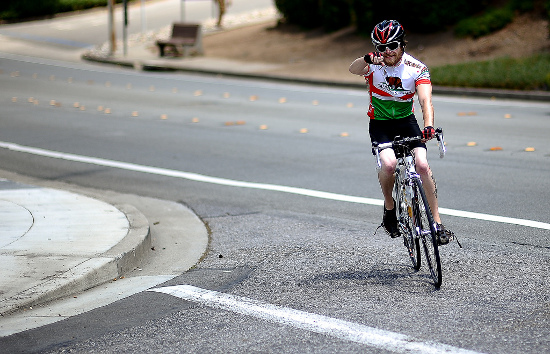 Making a case for a separated cycle track on Minneapolis’s crosscutting Minnehaha Avenue, the advocates at Twin City Sidewalks bring the history, delving without pity into the assumptions behind the American practice of integrating bike and auto traffic. Shockingly, it turns out that they were shaped by well-to-do men. Here’s a passage from Bill Lindeke’s excellent post, with my empahses added:

Konski was emphatic about the need for competitive bicycle racing to serve as a model for riding. In 1972, he wrote: “Why is it important to advance the sport of racing if we are to provide bike routes and bike paths? Because if the public understands the sport and learns why the serious cyclist does the things that he does, the individual, though he may not be interested or capable of racing, will be better able to apply this knowledge to his own riding.” (Konski 1973)

Competitive (male) bicycle racing was intended to serve as a model for everyday riders throughout the nation. For example, adopting the correct posture of the ‘world’s great bicyclists,’ and riding using aggressive speeds was deemed safer for everyone. Similarly, in a series of safety columns in Bicycling magazine (of which he was an editor), an influential advocate for the League of American Wheelmen described cyclists without professional training as ?over-aged child cyclists? with ?unsafe bicycles? (Delong 1970, 1971, 1972). For Delong, proper bicycling involved an attitude of intensity and competition, either with others or with one’s self. Bicycling was fundamentally about acquiring and honing skills:

“Bicycling is a sport of skill — a skill that increases throughout your life. Take every opportunity to test yourself. Then when an emergency comes, your reactions will be correct and automatic.” (Delong 1970)

Delong’s former organization, now more inclusively known as the League of American Bicyclists, no longer subscribes to the odd implication that biking is at its best when it resembles an emergency, or that it should always be integrated with auto traffic. And American thinking on how to make biking work is rapidly getting more European. But this British cartoon highlighted by TCS shows how much the whole world has changed: when it was made in the 1930s, the simple idea of a separated cycle track was apparently inherently ridiculous: 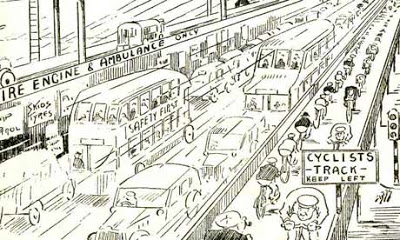