In Baltimore, bikes will team with buses to reconnect a car-lite city 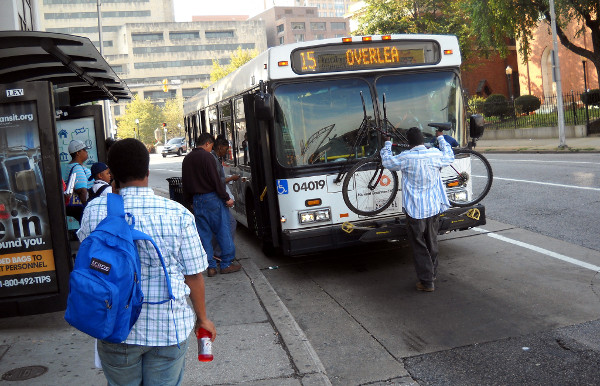 Second in a series of profiles of the Big Jump Project’s 10 focus areas.

Partway between two of the country’s bike-friendliest big cities, Washington DC and Philadelphia, is the only major Northeast city that has never gotten much into bicycles.

It’s Baltimore. And it’s about to change.

In fact, a lot is about to change about transportation in Baltimore. In July, its sprawling, spindly bus system will get a so-called “haircut,” refocusing bus service to neighborhoods with higher ridership in this city where only two in three households owns a car.

“Our buses … they don’t have high frequency and good reliability,” said Caitlin Doolin, the city’s bike and pedestrian planner. “They’re these long convoluted routes that used to make sense but don’t any more.”

Doolin said that today, during rush hour along the major north-south arteries of St. Paul Street and Charles Street, “you couple lack of buses out there with congestion, and you could be sitting and waiting for a bus for, I would say, 30 or 40 minutes.”

Starting in July, the time between bus arrivals on those streets will drop to 10 minutes or less.

In part to support this new frequent-service bus grid — as well as a federally funded rapid bus on North Avenue, arriving by 2021 — Baltimore is hoping to spend the next three years installing a low-stress biking network in six neighborhoods surrounding Saint Paul and Charles, just north of North Avenue.

It’ll open new possibilities for neighborhoods first built as “streetcar suburbs” of downtown Baltimore but now difficult to travel between without a car.

“These are really landlocked communities,” Doolin said. “The only way to get to these communities that are really less than half a mile away from each other was to drive.”

This despite the fact that in some areas, more than half of households don’t own a car.

Maybe Baltimore’s most ambitious goal for the three-year Big Jump Project is to create some sort of comfortable bikeway across Interstate 83, presumably on 28th Street, to reconnect the Remington and Reservoir Hill neighborhoods.

Baltimoreans who live in the western wing of the city’s “Black Butterfly” of largely African-American neighborhoods would get an easy bike connection to amenities in the city’s job-rich “White L,” which runs from Johns Hopkins University south into downtown. People who live east of I-83 would be able to bike to amenities like the massive Druid Hill Park, just west of the freeway. And neighborhoods on both sides would have an easier time reaching one another’s business districts, cultural landmarks and homes.

“These are places that are vibrant, that offer unique characteristics, and are just nice places to live,” Doolin said. “We’re seeing a nice marriage of demographics in these areas and we think this project can also start to marry them in a walking, biking way as well.”

Other bikeways are on the city’s to-do list as well, creating easy east-west connections to Johns Hopkins, to the new north-south protected bike lanes on Maryland Avenue and to the newly frequent bus lines on Charles and Saint Paul. Much of the funding, Doolin said, is likely to come from a statewide grant program that has proved very useful for biking infrastructure.