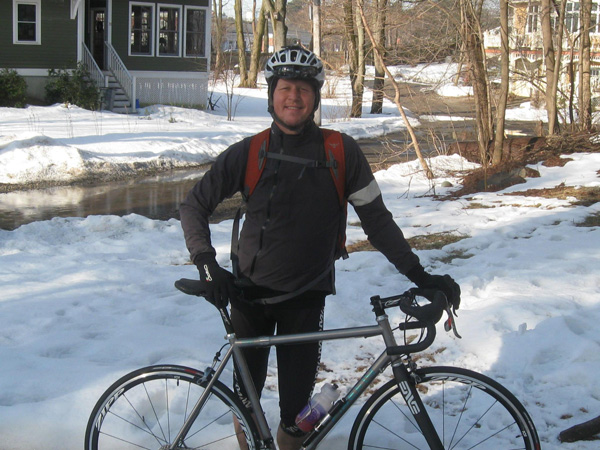 For racers and devoted recreational riders, Richard Fries (above) suggests using commuting as a way to get in extra training miles. (Image: Deb Fries)

I have become a devotee of Biju Thomas and Allen Lim and their book The Feedzone. I’ve cut way down on gluten and dairy, bought a rice cooker, stopped drinking those overly sugary, artificially colored drinks, and eliminated anything fried.

“Uh, yeah, let’s see,” I stuttered. “Sure…uhhh….give me this….” I placed a blue sports drink on the counter, and scanned the shelves. “And a French cruller.”

She seemed confused by me and my outfit, and my order. She gave me a bag with a French roll. Perhaps I should note that this Dunkin Donuts interlude occurred at 10:23 p.m. I had clicked into this sleepy Edward Hopper painting wearing a day-glow Mavic reflective vest with my Light and Motion Viz 360 blinking. She had sufficient cause to be freaked out.

“No, no,” I said, turning about to her. “That,” I said, pointing to the French cruller, fried and lathered in sugar. Thankfully she gave me two to make up for the mistake. I needed that cruller because I had completely cracked. And Allen and Biju and their book and their diet were tossed aside like the corpse when gravediggers found gold in Paint Your Wagon.

Allow me to suggest this experience with the French cruller could be part of the solution to America’s obesity epidemic.

I was on Day 2 of what I mockingly referred to as my “Commuting Block.” Looking at the calendar I saw that due to my professional commitments and travel and family obligations I could not “train” much in the weeks leading up to the Harpoon Brewery to Brewery ride, a hallowed 148-mile affair in New England.

Mind you I’m fortunate in that one of my clients is the Best Buddies Challenge bike rides, for whom I do a lot of beginner and novice cycling clinics. So some of my “work” is actually on the bike, often pedaling painfully slow and grinding up hills pushing a 240-pound banker.

While a lot of cycling purists turn up their nose at such a prospect, I relish the task. I’ve saved a lot of lives. I’ve watched the bicycle completely transform individuals and entire companies. I’ve altered their paradigms of what they are capable of achieving physically, mentally and spiritually. And I’ve watched their entire organizations change for the better. And I’ve seen an engineer shed 89 pounds in 16 months.

So for this week leading up to the Best Buddies Challenge: Hyannis Port, I had this training schedule:

I had put in a 19-hour week on the bike. And only about 7 of those hours could be vaguely considered as “quality.” Most of those hours were commuting to and from places the majority of Americans?including cyclists?would do by car. Far too often people drive to “training” rides. (And to the store, the gym, the practice, the post office, etc.)

But I would argue that those commuting miles are higher quality because, for a busy professional father of three, they are the best use of my limited time. And they are tremendous inspiration for those beginners I teach. “It’s better to ride a little a lot than a lot a little,” I say.

In four years of coaxing and coaching corporate executives and beginner teams, I have too often tried to discuss the beauty of cycling, the merits of riding in the group, the epic experience of climbing, and drafting techniques. After 10 minutes I would watch their faces glaze over before they would raise a hand and ask, “Can’t I just do a spin class?”

I would talk about red tailed hawks, waterfalls, ice cream stands, apple orchards and other bucolic elements of cycling. But nothing registered.

In my own efforts to train for Tim Johnson’s Ride on Washington, I turned to The Feedzone cookbook to improve my diet and lower my weight. For decades I had snubbed diets in favor of simply riding more. In my quest to shave off a reluctant 10 pounds, however, I turned to the book…And it worked. In doing so, however, I started?at age 52?to count calories, both ingested and burned.

In my research I learned that all that gym stuff?spin class, px90, insanity, zumba, seven minute abs, six minute abs, etc.?burns about 600 calories an hour.

When I say this in the bank board room everybody nods vacantly. These people know numbers.

Then I tell them that a rigorous hour on a road bike burns 1,250 calories. The heads all tilt like the RCA dog. Office chairs pivot towards me. Pens scribble on notepads.

And I tell them I can teach them how to enjoyably do three hours on the road bike….burning 3,750 calories and be at their desk by 9 a.m.

Weight loss in America is a $60 billion industry. About 88 percent of gym memberships go unused. The average membership lasts just 18 months. And we stumble on with this failed belief that fitness requires spending a lot of money, while rates for obesity, diabetes, respiratory ailments, heart disease and depression growing.

Americans have developed a “workout paradigm.” They feel they must divorce everything from work and career and tasks and shopping from the “work-out” (which is a curious word). The acceptable behavior is to stand on a treadmill with ear buds in watching television; effectively severing our head from the body. And when we work the acceptable behavior is to sit in front of a screen with our mind rattling away while our body lies fallow. Or they believe they need to hire somebody to dance and scream at them while they suffer.

But cyclists too have this paradigm, believing they need to have the full kit, the full gear, the full-on ride garb to properly train. And how much time are we cyclists spending stranded in cars? How much time goes into looking for parking? How much time is devoted to the commute?

Here’s the rub: we’re all really freakin’ busy. Integrating bike commuting, which can include the occasional “commuting block” I outlined above, can provide the greatest return on investment of anything. One can literally reach the base fitness of a regionally competitive cyclist simply by having a some good clothes, a proper set of lights, some fenders, and a decent backpack. We’re talking about investing $500 to save $10,000 a year.

The next time you find yourself selling the merits of cycling, forget the environment, forget greenhouse gases, forget the talk about fossil fuels, forget the bucolic elements of a life on a bike. Talk about weight loss and watch their eyes light up.