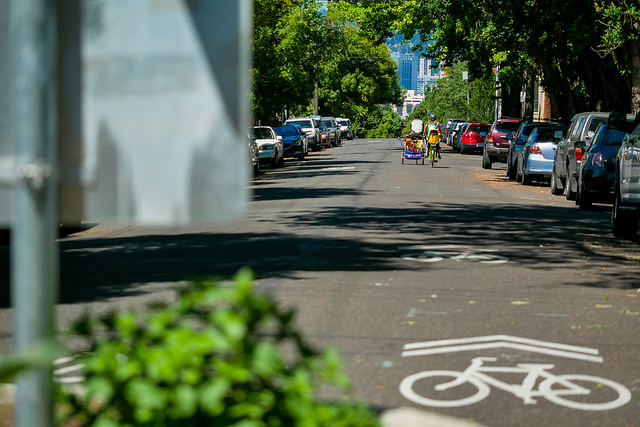 All photos are from neighborhood greenways in Portland, Oregon. You can look through the full album here.

Everyone understands, on sight, what a protected bike lane is. And most of us have seen an off-street path.

But there’s a third type of low-stress bike infrastructure that is notoriously difficult to describe — right down to the name we use for it. Maybe that’s why, despite numerous North American cities talking about this type of bike infrastructure, almost none of them have actually installed more than a few of them.

They’re neighborhood bikeways. Or, if you prefer, “bicycle boulevards,” “neighborhood greenways,” “neighborways,” “local-street bikeways,” “calm streets” or “quietways.” (Here’s a list of which cities use what.) 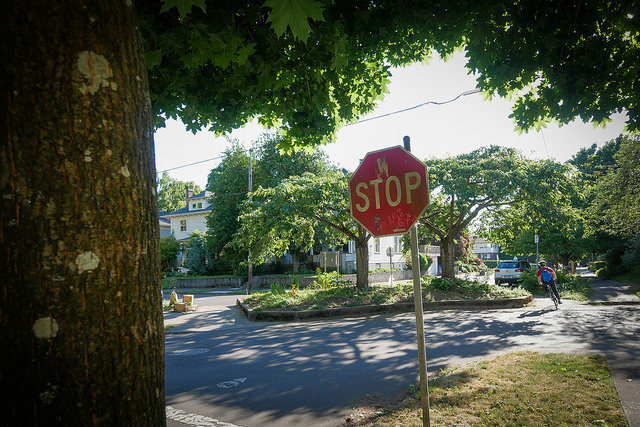 A diagonal traffic diverter can double as a neighborhood amenity.

Low-traffic side streets have been popular biking routes for generations. But over the last 40 years, a few North American cities advanced this concept into something more: a specific infrastructure type that makes the most of the American love affair with right-angled street grids.

Following the National Association of City Transportation Officials, a pioneering technical authority on bikeway design, here’s how we at PeopleForBikes define a neighborhood bikeway: 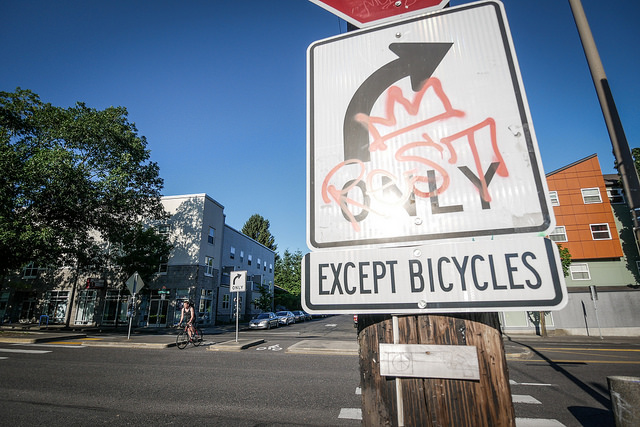 A traffic diverter doubles as a median refuge for crossing a four-lane street.

Neighborhood bikeways are no substitute for protected bike lanes on busy streets packed with homes and destinations. And they can’t compete with off-street paths for making long-distance biking fast and easy.

But neighborhood bikeways are almost perfectly safe. They’re relatively uncontroversial. And if you want to get many miles of a bike network on the ground quickly, there is no cheaper way.

In Portland, where they’re called “neighborhood greenways,” the city laid out a 60-mile network in three years for about $150,000 per mile, mostly from new traffic signals. In the first year after installation, they typically see bike traffic increase 60 percent.

“They’re great at connecting to schools, connecting to parks — connecting the neighborhood tissue,” said Gordon Padelford, executive director of the advocacy group Seattle Neighborhood Greenways. “In the low-density areas of a city, I think they do a fantastic job.” 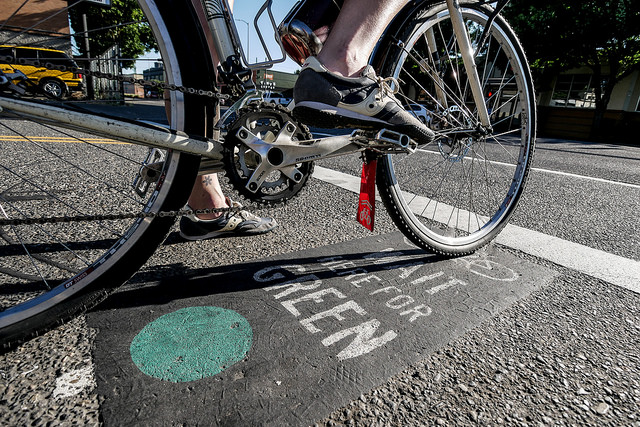 If activated signals are used to help cross main streets, people need to figure out how to activate them with a bike.

But what to call them?

In June, trying to decide what PeopleForBikes should use ourselves as our primary term, we interviewed 20 experts from around the country about the ups and downs of these various labels, and then circulated a poll to ask readers what they thought.

No term got a majority. But the single most popular answer surprised us: it was “neighborhood bikeway.”

The term is currently used by Philadelphia; Denver; Houston; and Washington County, Oregon. It’s also similar to the term used in Vancouver, B.C. That city, which has successfully installed the continent’s best such network, is also the only one to use “local street bikeway.”

Unlike “bicycle boulevard,” “neighborhood bikeway” connotes calmness rather than stress or speed. It also may be less likely to be mistaken for “bike-only street” — which is the concept that “bicycle boulevard” may have actually been intended to connote when the Palo Alto Bicycle Advisory Committee coined the term in the early 1970s.

“Neighborhood bikeway doesn’t say the street belongs to bikes but implies that the bikeway is a feature of the street,” said Randy Neufeld, a longtime biking advocate who works for the SRAM Cycling Fund. “It describes a function of the street, not ownership.”

And unlike “neighborhood greenway,” “neighborhood bikeway” avoids confusion with “greenway,” a common term for off-street paths, especially in the American Northeast and Southeast. Our research suggests this has been a major obstacle to universal adoption of that term.

No term is perfect. We expect that “bicycle boulevard” will continue to be the technical term, just as “cycle track” remains the technical term for a protected bike lane. And we expect and encourage cities to continue using whatever alternative is locally appropriate. We’ll do the same when we write about a local context.

But when we write or talk about this design generically, we’ll be using “neighborhood bikeway” first. We encourage cities who haven’t yet committed to a term to at least consider it for public-facing communications. 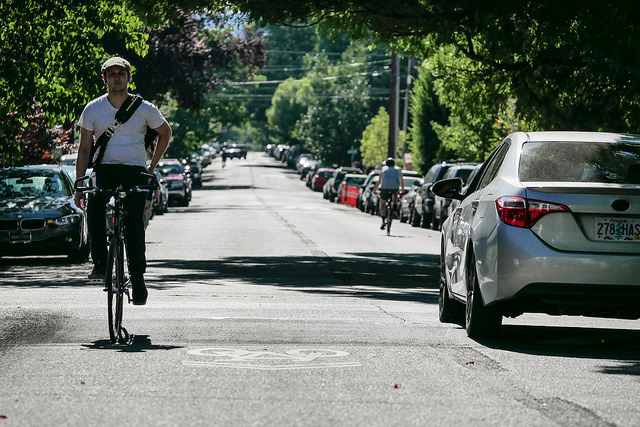 To keep speeds below 20 mph, Portland installs humps every 350 feet on its neighborhood greenways.

Speaking of public-facing communications, here’s another way we’re hoping to help: we’ve commissioned a photo shoot to capture the elements of neighborhood bikeways. All the photos on this post, and the others in this Flickr album, have been dedicated to the public domain. (Thanks to ace photographer Russ Roca of The Path Less Pedaled for working with us on this.)

This means they can be used for almost any purpose you can think of. (That includes commercial purposes like conference brochures, magazine articles or consulting reports, as long as no specific endorsement by the people in the photos is implied.)

The more people are exposed to the ideas in these images, we hope, the easier it will be for cities to include neighborhood bikeways in their biking networks. No matter what they’re called.