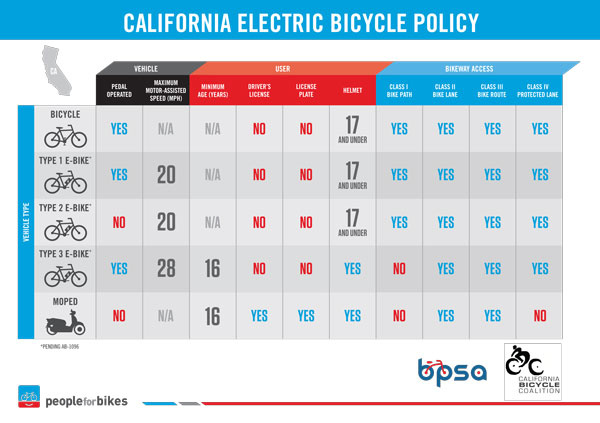 On October 7, 2015, California Governor Jerry Brown signed A.B. 1096, legislation that clarifies the regulation of electric bicycles (e-bikes) in California. This new law is the result of a coordinated campaign between PeopleForBikes, the Bicycle Product Suppliers Association (BPSA), and the California Bicycle Coalition (CalBike) to refine how and where cyclists can ride electric bicycles. A.B. 1096 will encourage the safe use of e-bikes by providing clear rules with respect to how they must be equipped and operated. The bill passed the Legislature with unanimous support in both chambers and takes effect on January 1, 2016.

Aside from modernizing e-bike law, A.B. 1096 fills in many of the gaps left by existing federal law and California state law with respect to electric bicycles. Most importantly, e-bikes will no longer be regulated like mopeds and the same rules of the road will apply to both e-bikes and human-powered bicycles. E-bikes will not be subject to the registration, licensing, or insurance requirements that apply to motor vehicles.

The bill designates three classes of e-bikes, and distinguishes lower speed electric bicycles that reach motor-assisted speeds of up to 20 miles per hour, from higher “speed pedelecs” which have motors that provide assistance up to 28 miles per hour. This class system allows the use of lower-speed e-bikes on bicycle paths, and also provides local municipalities the flexibility to regulate different types of e-bikes based on their local needs. The bill can serve as a model for progressive e-bike legislation in the rest of the country. 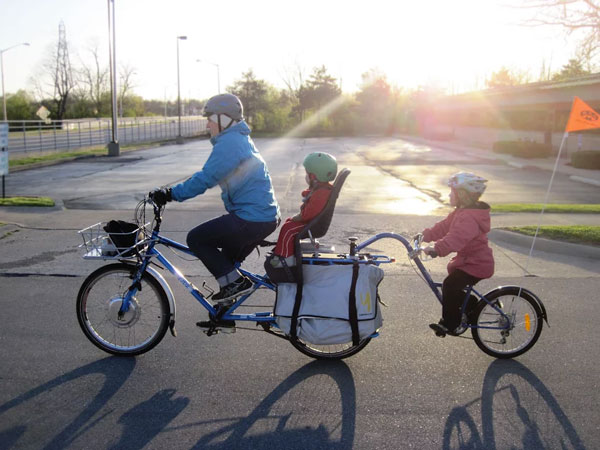 While e-bikes have been extremely popular in Europe for some time, their use in the U.S. is just beginning to proliferate. Clarifying the confusing array of state laws that govern the use of e-bikes is an important step in making it easier for consumers to understand how and where they can be ridden.

With an e-bike, bicyclists can ride more often, farther, and for more trips. Electric bicycles are designed to be as safe as traditional bicycles, do not compromise consumer safety, and benefit new bicyclists who may be discouraged from riding a traditional bicycle due to limited physical fitness, age, disability or convenience.

PeopleForBikes is grateful to Assemblymember David Chiu for sponsoring this legislation and his staff for successfully shepherding it through the legislature, as well as all of the stakeholders who came together in support of this bill. And thank you to the BPSA and CalBike for their significant contributions to this effort to get more people riding bicycles.

To learn more about electric bicycles, check out the PeopleForBikes e-bike page.