The Elders’ Statement of the Carcross Tagish First Nation (CTFN) of the Yukon Territory in Canada makes their values clear: “We will be the bosses of our land. We will watch over our land as we have agreed upon, and as we ourselves manage things according to our traditions. We will bequeath it to those coming after us in perpetuity.”

Economic development consistent with its history and the elders’ values was an essential step toward self-determination when the CTFN negotiated an agreement with the Canadian federal government establishing the nation as a self-governing entity in 2006. The agreement formally transferred ownership of Montana Mountain and other nearby traditional lands to the CTFN. That land is an enviable asset. Located at the headwaters of the Yukon River, Carcross is a favorite side trip of the thousands of cruise ship passengers who disembark in Skagway, Alaska to take the White Pass and Yukon Route train to the area. A heritage and geography rich in trails was another asset: ancient paths of the nation’s own making allowed them to hunt and live off the land for centuries. Later, existing trails were adapted or new ones created by prospectors in successive waves of gold and silver rushes.

In some respects it was an obvious choice to develop the trails into an adventure-grade mountain biking destination. Tourism consultant Jane Koepke proposed just such a project, but with a big twist: train and pay the CTFN’s young citizens to help build it. The Single Track to Success (STS) trail-building program offered work to underemployed young people while developing transferable skills. The crews learn first aid, basic carpentry, and trail construction.

Today the crown jewel of Carcross’s trails is Mountain Hero, 24 kilometers of singletrack adventure that starts at alpine elevations before descending 1600 feet. Thousands of visitors now flock to the trails at Montana Mountain every summer. Tour and lodging business have expanded and new ones have sprung up. The trails have also helped ensure a fully-booked summer season for the 21 retail outlets at Carcross Commons, says Nelson Lepine, Managing Director of the Carcross Tagish Development Corporation. At the Commons, the businesses are small, and carry locally-produced wares, which keeps tourism revenue circulating locally. 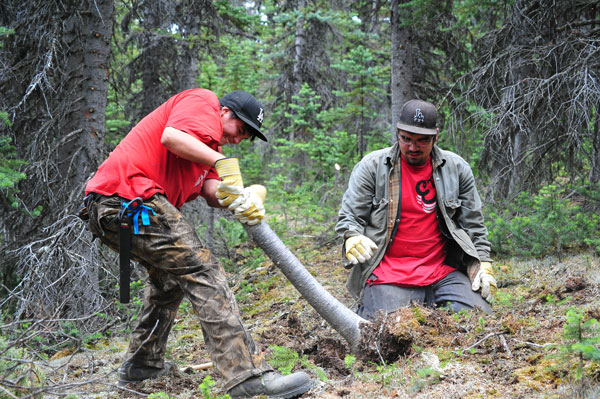 While they were helping build this sustainable economy, the young CTFN citizens on STS crews were also re-connecting with their historical roots on the mountain. “I grew up around this mountain, but I never realized how amazing it was until I spent day after day on it,” Carcross resident and CTFN citizen Sheena Johns told the Yukon-based site ‘Pathways to Wellness’ during her summer working the trails in 2012. “I love it here.”

“I [had] recently moved back to Carcross with my 14-month-old son and the trail job was my first job after having my son. It helped me get back into the working groove and gave me the chance to support my son all on my own,” says Johns of her summer on the mountain. Building the trail helped prepare her for other jobs, she says. “It definitely taught me to work with a team. Most of the crew didn’t have too much experience working so it was a great opportunity to acquire strong work ethics.” Many young people also get a taste of leadership: as they gain experience on the trail, they help mentor new youth who join the crew.

Lepine says that initial resistance to inviting MTB revelers onto Montana Mountain’s trails has faded as people have seen what the trail work has meant for the area’s young people, many of whom have moved on to work for other CTFN economic development projects. Others have gone on to to become guides and rangers. The First Nation is also exploring other sustainable development such as solar and wind energy, but will keep expanding their trail system with projects that will continue to engage the CTFN’s young people.

Sheena Johns has traded her trailbuilding tools for an office job, but her work on Montana Mountain has left a lasting impression. “Building trails on a mountain is an all for one and one for all job and it was probably one of the best summers I’ve had.”