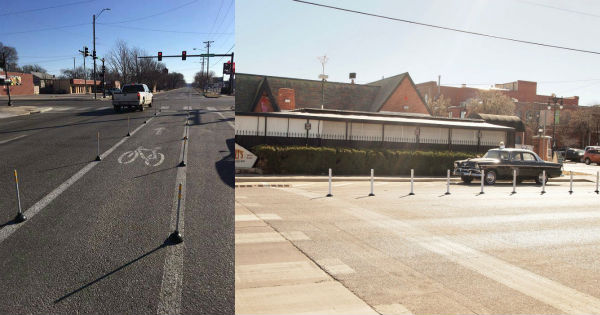 Cause; effect. Before and after at First and Washington in Wichita, Kan. Photos: Yellowbrick Street Team.

Now that’s what you might call a successful movement.

Two weeks after two rows of plungers set up to temporarily protect a Wichita bike lane went viral around the world, the City of Wichita has decided that come to think of it, those plungers were making a pretty good point.

This week, Kansas’ largest city spent about $1,000 to order and install permanent flexposts for installation along 100 feet of the bike lane, which had often been encroached on by people using the space as an illegal turn lane for their cars.

The new flexposts, which will stand in the footprints of the anonymously installed plungers, should prevent that by creating a very short stretch of protected bike lane.

It’ll be the second protected bike lane in Kansas; the first went up in the college town of Manhattan in 2014.

Also this week, the organization that had placed the plungers revealed its previously mysterious identity. It’s a volunteer group called the Yellowbrick Street Team, led by Wichita resident Alex Pemberton.

Pemberton said his group spent $50 to buy the plungers with the deliberate goal of making the stunt spread on social media. Within days, it was featured on local TV and from there spread to national outlets like CityLab, Next City and mental_floss.

“Wichita is not a media capital, and it’s not a place that tends to get attention from urban press,” Pemberton said in an interview. “So we knew that if it was really going to get attention, it had to have a little twist to it.”

Pemberton said a Yellowbrick volunteer had seen plungers used for the purpose by the similar Dallas-based project The Better Block.

“The TV station gets to use their silly puns; the social media loves it,” Pemberton said. “So we were able to get a story on local news, and once that happened, it just blew up.”

Keeping the stunt anonymous added another level of interestingness, he said.

“The headline was ‘mysterious plungers,'” said Pemberton, 25. “Which if I ever start a rock band is what it’s going to be named.”

In any case, the plan worked perfectly.

“While the story was being shared from Ireland to Auckland, we were lobbying behind the scenes for the city to place permanent delineator posts at the intersection,” Pemberton wrote Tuesday on the Yellowbrick Facebook page.

“We’re very lucky here in Wichita in that we have a very progressive city that’s very responsive to the needs of its citizens, so it didn’t take a whole lot to convince them,” Pemberton said. “With only two weeks of having the media coverage, they had already ordered these posts and had them set.”

Wichita’s action echoes a similar incident in Seattle in 2012, when an anonymous group calling itself the “Reasonably Polite Seattleites” installed its own posts on a bike lane and the city engineer decided to make the design permanent.

More recently, anonymous street activist groups have been at work in San Francisco, Portland and elsewhere.

Now that the Wichita plunger stunt has perhaps eroded some of the novelty of plunger-protected bike lanes, Pemberton said he’s been looking through the Twitter discussions for ideas of what the next Internet-friendly guerrilla bike lane separator should be.

“Somebody recommended cat trees,” he said.

Thanks to PeopleForBikes local innovation director Kyle Wagenschutz, and apologies to everyone else, for the first sentence of this post.