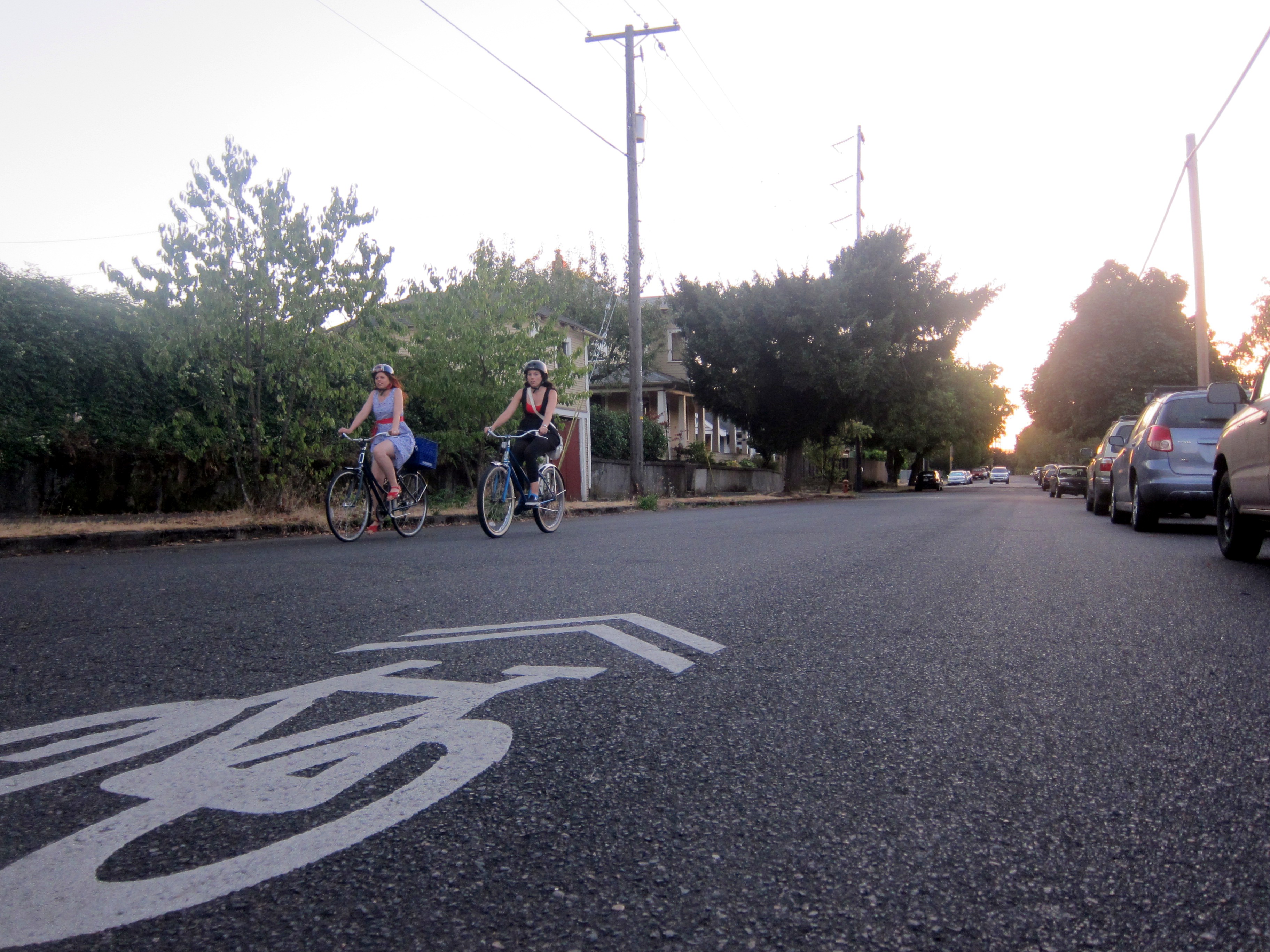 Part of a two-post series about neighborhood greenways. Today: Should greenways count as quality bikeways? Tomorrow: Wisdom from Portland for building great greenways.

An odd thing happened in Portland last month: Its political leaders lined up to celebrate a fast-growing 59-mile bikeway network that everybody in town seems to like.

In a city where the generalist media regularly imply that bikeways are unaffordable luxuries and a politically polarized state where the word “bicycle” can be legislative poison, the show of public support for bike infrastructure was notable. Even stranger: the bikeway network in question is scheduled to keep growing by 15 miles a year, thanks to strong support from the neighborhoods it’ll serve.

These are the beautifully topsy-turvy politics of the neighborhood greenway — a sort of residential retrofit that, in Portland, costs about $140,000 per mile and typically increases bicycle traffic on a street by 60 percent in its first year.

Though this new generation of bikeways is uncontroversial among the public at large, neighborhood greenways — low-traffic streets that are annoying to drive on but relaxing places to do everything else — are dividing the world of bike planning.

For greenway acolytes, greenways are a uniquely American type of bike route, an affordable way to rapidly improve bicycling without alienating non-bikers. To doubters, greenways are useful but second-class infrastructure, an implication that bikes belong on back roads, not busy commercial corridors.

Portland’s greenways have been evolving since 1980, when Southeast Salmon Street was marked as an alternative to biking on two nearby commercial streets. Today, the city’s neighborhood greenways feature speed humps every 350 feet, well-marked crossings at big streets and, in some cases, traffic diverters to block autos from zooming through. Every intersection is controlled by stop signs that face, whenever possible, perpendicular to the greenway. The routes are marked by sharrows down the middle of the roadway and directional signs at key intersections.

As of this fall, Portland’s greenways also have a low speed limit: 20 mph. The city’s new transportation director has included them among the top priorities for maintenance and investment.

“We’re trying to create a trail-like experience through the neighborhood — this really pleasant, calm place,” said Greg Raisman, a project manager on the four-man team building Portland’s lattice of greenways. “There are some advantages to the neighborhood greenway system over a commercial street. They’re quieter. You can ride side-by-side with your friend and have a conversation much easier. And they have less conflict with motor vehicles. [On a busy street] every driveway, every intersection, is a conflict point.”

But greenways have problems, too. They don’t physically separate bikes from cars, and they don’t do anything to improve the big commercial arteries that dominate American cities. Here at the Green Lane Project, we don’t count neighborhood greenways as “green lanes,” the separated bikeways that have proven so successful in Northern Europe. The Alliance for Biking and Walking, whose figures show Portland’s bikeways slipping down in national rankings, doesn’t count greenways as bike infrastructure; if it did, it might rank Portland infrastructure 12th, instead of 15th.

In Portland, where the city increasingly sees greenways as the pride of its bike network, officials say greenways and green lanes will complement each other to improve bicycling.

“Nobody that I know thinks that you’re going to do it with just separated facilities,” said Portland Traffic Safety Manager Mark Lear, who leads the city’s greenway team.

“We think about it as building a transit network,” said Raisman. “The buffered bike lanes and cycle tracks — those are kind of the streetcar, light rail. This is the bus network.”

When Raisman describes neighborhood greenways as the “bus network” of Portland’s bike system, he’s not just saying they’re good for local trips. He’s saying that mile for mile, they’re cheaper to build — both in money and in political capital.

“This is a low-cost, fiscally effective solution to a problem that we could throw a lot of money at,” state Sen. Ginny Burdick (D-Southwest Portland) said at last month’s event unveiling the new 20 mph limit.

But at $140,000 a mile, are Portland-style greenways really that much cheaper than the simplest protected lanes? Last year, Chicago unveiled its first half-mile green lane set off by plastic posts and paint. Cost: $140,000.

Instead, the bigger advantage of greenways over green lanes might be that they appeal to people who don’t ride bikes. A low-traffic street, after all, is also great for strolling, jogging, skating and playing pick-up basketball. For politicians like Burdick, that’s a major selling point.