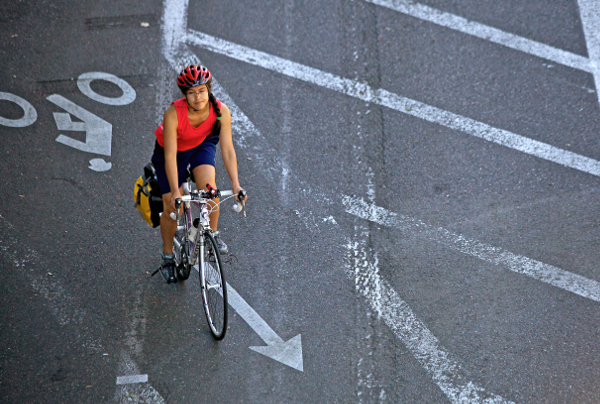 Fifth in a series about opinions held by the “swing voters” of bicycling.

When it comes to public messages about bikes, safety shouldn’t always come first.

On Tuesday, we showed the latest evidence that a perceived lack of safety on the road is a powerful factor preventing Portlanders and San Franciscans from riding bikes. Today, we’re wrapping up our review of the data by exploring what seems like a paradox: Even though three-quarters of respondents feel unsafe on the road, the word “safety” seems to be a poor tool for changing their minds.

Before finishing the web survey, our sample of people who own bikes but don’t ride regularly was asked to evaluate a series of possible that communicated the reasons for biking.

Here’s the one that performed the best, which alludes to “risks” of cycling without focusing on them:

And here’s the one that focused on safety, with its performance: 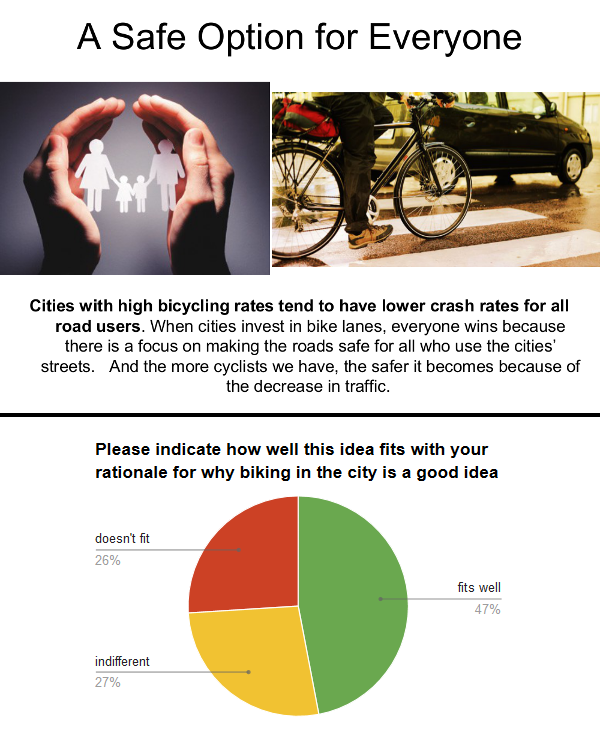 An even odder finding: 20 percent of respondents said they had negative feelings about the word “safe” as it relates to bicycling on city streets.

Lynette Xanders, the market researcher, said her focus groups offered a clue: many people, including those who ride occasionally, simply don’t accept the idea that bike facilities can improve safety. Instead, they focus on education and interaction quality.

“It’s a polarizing hot button because of a lack of belief that it’s true [that bicycling is safe], and because bike lanes alone cannot make it so,” Xanders said. “They don’t believe that having them, alone, will make them safer.”

For street designers and bike advocates, this creates a dilemma: in legislatures and city halls, no argument for bike facilities delivers more results than safety.

“When talking with decision-makers, safety is always going to be one of the highest priorities,” said Jeff Miller, CEO of the Washington DC-based Alliance for Biking and Walking. “Even at the local level, it’s a lot better if people are talking about safety as one of the benefits.”

But Miller said he’s persuaded that talking about safety isn’t very good at getting people on bikes, and it might even be ineffective at getting them to politically support bike infrastructure.

“We don’t need to do anything to reinforce people about the dangers of bicycling,” Miller said. “There’s already a bias way stronger than reality about how safe or dangerous bicycling is.”

Mary Lauran Hall, the Alliance’s communications manager, said her lesson from the data was “talk about safety only if you have to.”

Doug Gordon of the blog Brooklyn Spoke said he thinks safety is “not where the bike industry and advocacy groups should ever engage people.”

“Look at the automobile industry,” Gordon said. “If they really wanted to appeal to people’s safety, they would show crash statistics, survival rates. — You don’t see that any more. You see the car parked in the driveway and the family playing catch.”

If you’d like, you can download the raw results of the survey and a full PDF report of our findings. The Green Lane Project writes about the ways cities are building better bike lanes. You can follow us on Twitter or Facebook, or sign up for weekly emails of our latest news here.