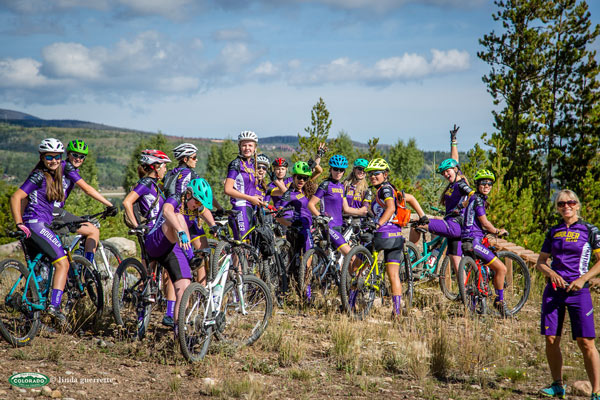 The Colorado High School Cycling League is less than a decade old but has already grown to include 1,200 riders at 147 high schools in Colorado, New Mexico and Wyoming. As the league embarked on “build[ing] strong minds, bodies, and character” in students, its expansion has also produced a happy secondary effect: strengthening the recreation economies of the small towns where the league holds races.

Every fall, the league’s five-race series draws up to 850 students to Eagle, Frisco, Grandey, Leadville and Nathrop. This year, the town of Steamboat Springs joins the rotation. In contrast to a football game or soccer match that lasts a few hours, National Interscholastic Cycling Association (NICA) teams compete in multiple stages and races over the course of a full day. So, says Kate Rau, the league’s executive director, “Our families stay all day.” Most also stay overnight: on race weekend, lodging frequently sells out, filling up with league families. Rau says her staff and coaches have occasionally had to couch-surf, and once had to camp at a race venue because all nearby lodging was occupied.

In towns with already established mountain biking trails, all that visitor spending flows into their recreation economies. But in other cases, the league has played an integral role in nurturing bicycle tourism.

Around 2011, leaders in Eagle, CO (population 6,500) were strategizing about how the town could capitalize on its location between Vail and Aspen. Eagle already enjoyed an enviable microclimate with cooler-than-average summers. Drier winter conditions there extend outdoor recreation to mid-December, about four months longer than the season for nearby destinations like Fruita. But Eagle had one quite literally steep barrier to reaching its 70-plus miles of cow trail turned ideal mtb terrain: a punishing climb that was decidedly not kid- or beginner-friendly. “You really had to work to get to it,” Rau says.

Enter then-mayor Yuri Kostick, who shared his vision for building a friendlier trail. Kostick convinced Rau the town could deliver, and then helped generate support for the town’s $60,000 investment to fast-track the construction of a new NICA-standard trail. Fast-track is no exaggeration: the resulting Haymaker Trail went from dream to reality in about six months, just in time for the league’s October 2013 state championships.

“It’s really paying economic dividends as well as a cultural dividend,” Kostick told NICA in 2014, less than a year after Haymaker opened. “Our hotels and restaurants are full, people have come out just to spectate. We love it. We’ve jumped in with both feet.”

The upcoming 2017 fall season will be the league’s fourth year in Eagle. In her economic impact report to the town, Rau estimates that the fall 2016 race attracted 1200 visitors with spending of $150 per person, for a total of $180,000 in revenue for area businesses. The town contributed $7,000 from its events and marketing tax fund, and handily recovered the investment to the tune of $8,100 in taxes.

The success of Haymaker helped to spur further trail development in Eagle. Since 2013, the town had added miles of family-friendly trails—some with the express purpose of improving bike-to-school conditions for the community’s families and others strictly for recreation. Today, Eagle’s position as a mountain biking destination is well-established.

For Eagle and the other NICA towns, league events have even given rise to a new niche visitor market, too. “Our families go to the communities throughout the year to pre-ride trails.” Rau says. “It’s like, ‘Oh, there is going to be a race and we have never explored the trails. Let’s go there this summer.'”