Spinning iron in to gold 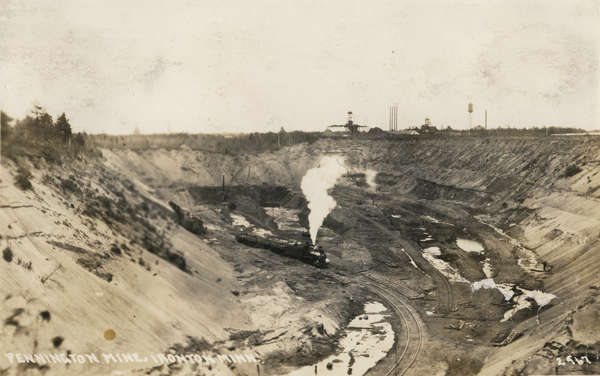 When Patrick Stoffel returned home from his first visit to Minnesota’s Cuyuna Overlook after a mountain biking trip with a friend, he told his fiance, Julie McGinnis, that it was the place they’d get married. The Overlook is the highest point in the Cuyuna Country State Recreation Area, and from there Stoffel took in thousands of acres of deep clear water lakes and forested hills.

Thirty years ago, the view was considerably less inspiring, and few visitors sought out Cuyuna. The iron ore mining industry had long moved on, and many residents of Crosby, and nearby Ironton and Cuyuna, had followed. “It looked like the moon,” says Jamie Skjeveland, Superintendent of Schools for Crosby-Ironton. “Crosby was just this very poor and dire town.”

In the early 80’s, Barb Grove was the only woman on a regional committee charged with figuring out what to do with the mine-scarred land. She met with resistance when she suggested transforming it into an enormous park. But Grove persisted, converting skeptical civic and business leaders and finally, in 1993, won designation for the 4,626 acres as a state recreation area.

With the land preserved but without plans for further development, time and nature slowly rehabilitated the bleak lunar terrain into green hills. The deep mining pits filled to form lakes. Soon, Minnesota Off-Road Cyclists (a non-profit volunteer organization dedicated to safeguarding the future of mountain biking in Minnesota) were eyeing the terrain as near-ideal for mountain biking.

Their proposals for MTB trails were not taken seriously initially, says Aaron Hautula, president of the Cuyuna Lakes Mountain Bike Crew (CREW). Like Grove, the MTB group pushed on, and would eventually get the go-ahead to build. Their goal: a world-class, destination-quality trail system.

Today, the area’s family-friendly, something-for-everyone MTB trails invite four-season fun. Visitors can even ice-bike and snowshoe through most of the Minnesota winters. These trails are now the jewels of recreation area, which attracts well over 100,000 visitors annually.

As nature had transformed the old mine, visitors transformed downtown. About five years ago, says Skjeveland, businesses started reporting double-digit profit increases. Of downtown Cuyuna’s many once-vacant storefronts, Hautula says, “they are commodities now, people are not giving them away anymore.”

CREW recently raised $670,000 for the next phase of planned trail expansion, some from major employers who are key to a deeper economic revitalization. They leverage the trails to recruit new employees who will become residents.

The school district made a concerted effort to head off a looming teacher shortage (applications for open positions were fast dwindling from triple to single digits) by positioning a new recruitment strategy around quality of life. To entice higher-caliber applicants the district gave the trails a starring role in its recruitment video. A district that once filled just one or two new positions a year filled fourteen for the 2016-17 school year.

According to Todd Bymark, director of physician recruitment at Cuyuna Regional Medical Center, the combination a new state-of-the-art medical facility and the trail system has allowed the Center to compete with larger towns in the region and beyond. For the last six years, Bymark’s entire booth at his major recruiting event has featured a mountain bike framed by stunning photography of the Cuyuna recreation area.  “I call the mountain bike trails my deal-sealer,” says Bymark. The community tour he gives to candidates includes a visit to the Overlook. “I’m taking them up a gravel road. They don’t know where they are going. When they get to the top they say, “Man, I want to come here.'”

In the end, Stoffel and McGinnis chose Minnesota’s Outer Banks for their wedding instead of the Overlook. But Cuyuna will have a central place in their lives. Last year the couple left their jobs in St. Cloud and moved with their two young children to Crosby. The couple is betting on the expanding trail system to bring customers to their new business, the Red Raven Bike Cafe. The shop opened in mid-December, and weekends are already bustling. “Years later, here we are with our own business,” Stoffel says. “It’s pretty incredible.”