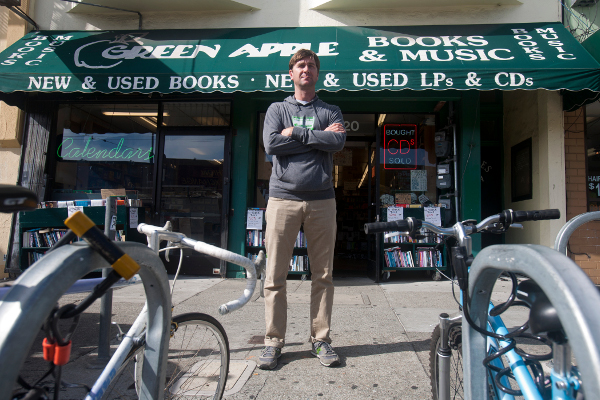 At first thought, it seems crazy to remove auto parking from a neighborhood where you can rarely find a parking spot.

But as more Americans use bikes for their daily errands, more retailers are thinking twice about their assumptions — and realizing that once biking becomes easy and comfortable, busy neighborhoods are actually the perfect places to swap out auto parking.

The reason is simple: cars don’t buy things. People do. And square foot for square foot, bike parking is more than three times more lucrative than car parking as a use of precious real estate.

That’s why Pete Mulvihill, owner of Green Apple Books in San Francisco’s Richmond District, asked the city to replace an auto parking space in front of his shop with 10 bike parking spaces.

“It takes a couple hundred people walking in our store every day to keep our doors open,” said Mulvihill, co-owner of Green Apple Books in San Francisco’s Richmond District. “We’re in a pretty congested neighborhood; parking is tough. There’s no alleys, so delivery trucks have to do their business up front. On top of it, sidewalks are pretty narrow.”

But with many of his employees and customers coming in by bike thanks to San Francisco’s increasingly bike-friendly streets, a bike corral helped with all of that.

“I think they can see that when they have eight bikes out front, that they don’t have cars,” he said.

Mulvihill’s intuition is backed up by hard science. A growing body of evidence shows that though people on bikes tend to spend less by the hour and the trip, they make up for it by returning more frequently and taking up less space while they shop. Here’s a 2008 master’s thesis from Melbourne, Australia, that does the math: A 140-square-foot parking space can hold either one car ($27 per hour parked, according to shopper behavior), or up to six bikes ($16.20 each per hour parked). It comes out to:

Parking lots are even less efficient, because they require driveways, cruising areas and so forth. That approximately doubles the amount of space that must be devoted to car parking, which can become a crippling real estate expense for retail startups.

So it’s not just out of the kindness of their hearts that retailers in San Francisco, Minneapolis, Portland and Chicago are happily swapping on-street auto parking spaces for bike parking corrals, sometimes in the face of steep bureaucratic obstacles. For them, efficiently functioning neighborhoods are a matter of survival.

Mulvihill sees the benefits of his increasingly efficient street every time the door of his shop swings open.

“The refrain is that bookstores are a dying thing, but most of us have had growing sales in the last couple years,” Mulvihill said. “People value having our store here. They vote with their dollars on the retail landscape.”