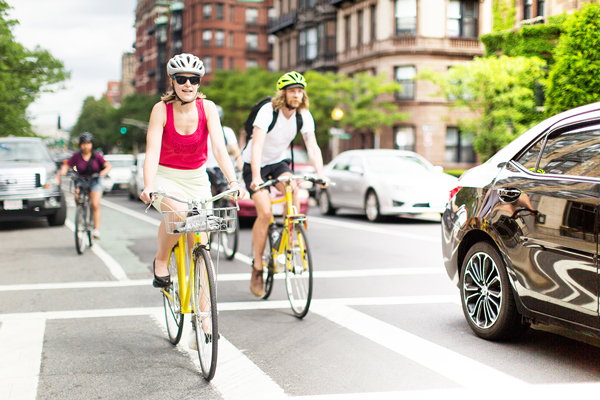 According to a new study released by Portland State University’s Transportation Research and Education Center in Oregon, bicycle lanes and infrastructure can produce tangible economic benefits for cities.

The National Street Improvements Study, conducted by PSU in conjunction with PeopleForBikes and consulting firm Bennett Midland and funded in part by The Summit Foundation, researched the economic effects of bicycle infrastructure on 14 corridors across six cities — Portland, Seattle, San Francisco, Memphis, Minneapolis and Indianapolis. The study found that improvements such as bicycle and pedestrian infrastructure had either positive or non-significant impacts on the local economy as measured through sales and employment.

For example, in 2012, bike lanes were installed on Central Avenue in Minneapolis by reducing the width of the travel lane and removing parking lanes. Retail employment increased by 12.64% — significantly higher than the 8.54% increase calculated in the control study area a few blocks away. The same corridor also recorded a dramatic 52.44% increase in food sales, which more than doubled the 22.46% increase in the control area. A protected bike lane along Broadway in Seattle that was completed in 2014 was accompanied by a significant 30.78% increase in food service employment compared to  2.49% and 16.17% increases in control areas.

“This study is an important resource to help cities make the case for building more bicycle infrastructure,” said Zoe Kircos, PeopleForBikes’ director of Grants and Partnerships. “PeopleForBikes knows that connected networks are key to encouraging more people to ride, and now the data shows that economic vitality often follows those investments. We’ll share these case studies far and wide, and encourage other communities to use this economic assessment guide to calculate the economic benefits of bike lanes on their own streets.”

While similar studies have been conducted in the past, notably by the New York City Department of Transportation in 2013 and the San Francisco Municipal Transportation Agency in 2014, the National Street Improvements Study was the first of its kind in incorporating these unified research methods across multiple corridors and cities. The findings refute assertions made by bike infrastructure critics that new lanes hurt adjacent businesses by making car access less convenient.

PeopleForBikes is hopeful that the results of this study can further our mission of making biking better for everyone, and be used nationwide by policymakers and city planners as an analytical framework for future infrastructure planning, particularly relating to the positive economic impacts and safety benefits of non-motorized transportation infrastructure like bike lanes.

“There is tremendous potential to expand on what we learned in this research project to additional cities and corridors, and to provide policymakers with the opportunity to evaluate street improvement projects before implementation or to collect additional economic/business metrics before and after implementation,” said Jenny Liu, associate professor in the Toulan School of Urban Studies & Planning at PSU.

The study found that the food service businesses benefited most from the addition of bicycle and pedestrian infrastructure. Evidence of increased sales, employment and wages was observed in nearly all of the city corridors studied, even in cases in which a motor vehicle or parking lane was removed to install a bike lane.

You can view the full reports from each city in the study as well as a guide and template developed to help other cities conduct similar analyses here.