That’s a First: A Judge Protects a Bike Lane With a Restraining Order 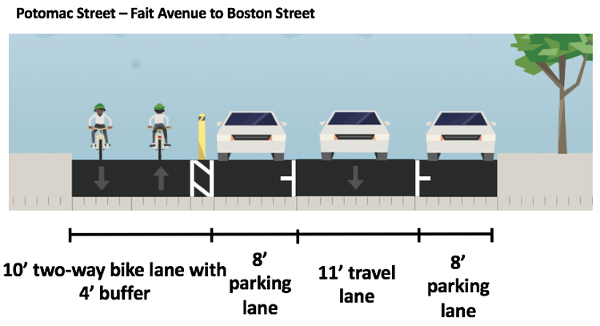 An increasingly unusual situation in Baltimore has led to a dubious milestone: A circuit court judge has issued a restraining order to stop a U.S. city from removing a new protected bike lane.

It’s only the latest in a string of odd events, beginning with the city’s decision to scrap an already-completed public process and tear out a four-week-old post-protected bike lane under construction on Potomac Street. From Streetsblog USA:

The city has already spent $775,000 designing and installing the bike lane, which had been included in city planning documents for the past five years. The project received federal funds distributed by the state and met design guidelines set by the Federal Highway Administration and the National Association of City Transportation Officials.

The local city councilperson and some neighbors are in favor of the bike lane, but other neighbors aren’t — and after construction began, the neighbors who don’t like the plan persuaded the mayor to reverse the public process on the grounds that the International Fire Code requires streets to have 20 feet of clearance. 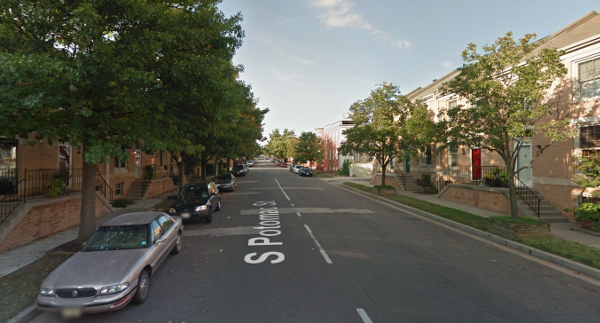 An anti-bike-lane petition described Potomac as “one of the last scenic streets left in the neighborhood.” Images: Google Street View.

If the same 20-foot standard were applied citywide, Baltimore would be unable to build the protected bike lane network its residents have spent years planning — and indeed the city might have to remove other network links that are already built.

Local advocacy group Bikemore pointed out that the streets one block east and west of Potomac don’t have 20 feet of clearance, either … because of parked cars. But the city has no plans to remove miles of parking lanes citywide.

A few blocks north and one block west of the previous image.

“Why is this lane not acceptable, but we have other streets throughout my district, including the one I live on, that are less than 20 feet?” said Cohen. “We are an old port city with small streets and alleys.” If the 20-foot rule is truly an issue, he said, it’s up to the city to purchase right-sized equipment so firefighters can do their job. “I have a lot of respect for our fire fighters, and I believe that they would be able to figure out a way to fight fire even with less than 20-foot clearance.”

Without a city transportation director (the post has been vacant for more than a year, with a high-profile national search continuing) the decision came to Mayor Catherine Pugh’s office. Her office proposed removing the protective posts to create a very unusual bidirectional buffered bike lane, then narrowing the bike lanes to four feet in each direction with an 18-inch door zone buffer.

On Friday, the latest twist: prompted by legal action by Bikemore, Judge Althea M. Handy concluded that removing the bike lane would cause “immediate, substantial and irreparable harm” and issued a temporary restraining order to stop the city from its removal.

In a statement on the restraining order, an attorney working with Bikemore upped the ante. He compared the situation to Maryland Gov. Larry Hogan’s locally unpopular decision to block a new east-west rail line through Baltimore.

“Our city was already once forced to walk away from federal funding for transit and improved mobility,” attorney Mark Edelson said. “We will not allow that to happen again.”