The Baltimore workaround: Why its protected lanes are legally bike paths 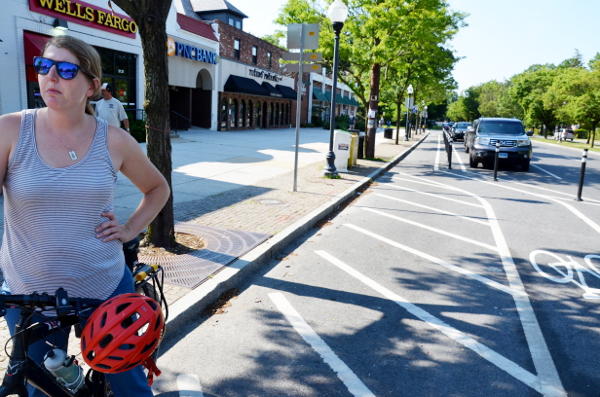 When the Charm City broke ground last week on a downtown biking network, a clever bit of diplomacy was working behind the scenes.

What’s the difference? Maryland requires people to ride in a bike lane if a safe one is available on the same street … but it doesn’t require them to ride on a bike path.

And if you look carefully at the state’s definition of bike paths, it includes protected bike lanes.

“Essentially the state law is just written very badly, but badly to our advantage,” Caitlin Doolin, a transportation engineer working as Baltimore’s bicycle and pedestrian planner, said Tuesday. “I basically just showed the definitions and the law to our lawyer and she said, Yeah, there’s no real definition here that people on bikes have to use a bike path.”

The issue came up last year during planning of Baltimore’s just-finished Roland Avenue protected bike lane. At its narrowest points, four feet with a two-foot buffer, that lane is too narrow for one bike to pass another. Some people who like to bike quickly on the divided four-lane boulevard objected to the possibility of getting stuck behind a child or someone else biking slowly. 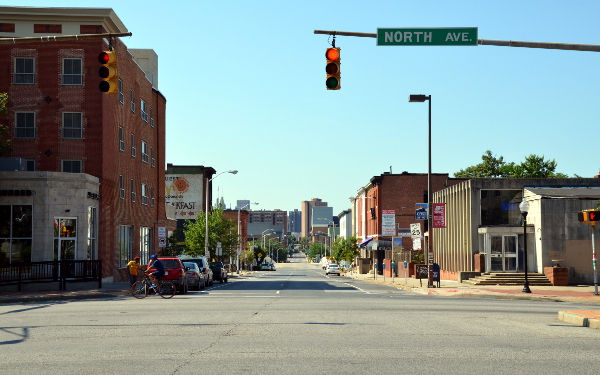 The corner of North and Maryland avenues. By next year, Maryland will boast one of the country’s longest continuous protected bike lanes.

Then one biking advocate who had opposed the protected bikeway made a happy discovery: state law actually left room for the city to define an in-street protected bikeway as a “bicycle path.” Here are the relevant definitions:

(c)  Bicycle path – “Bicycle path” means any travelway designed and designated by signing or signing and marking for bicycle use, located within its own right-of-way or in a shared right-of-way, and physically separated from motor vehicle traffic by berm, shoulder, curb, or other similar device.

(i) Any trail, path, part of a highway, surfaced or smooth shoulder, or sidewalk; or
(ii) Any other travelway specifically signed, marked, or otherwise designated for bicycle travel.

So it turned out that under Maryland law, Roland Avenue’s sport cyclists were safe — and so was Roland’s protected bike lane.

“Maryland state legislature is notoriously tough on bikes,” said Liz Cornish, executive director of the Bikemore advocacy group. “This is a case where the innovation at DOT outpaced state laws and it worked to our advantage.”

With Roland wrapped up for now, Baltimore has more big bike-network improvements in store. The protected bikeway on Maryland-Cathedral broke ground on Thursday and will finish in “two to three months,” Doolin said Tuesday. Another 7.5 miles of bikeways will also thread through Baltimore’s city center over the next year, joined by the forthcoming Charm City Bike Share in October.

Baltimore is one of the last major East Coast cities to start using protected bike lanes to make biking a more pleasant, dignified way to get around. Now that they’ve arrived, it looks as if they’re ready to bring a lot to the city. Whatever the lawyers call them, most of the city’s biking believers will call that a win.

The Green Lane Project is a PeopleForBikes program that helps U.S. cities build better bike lanes. Our next phase is the Big Jump Project, which will select 10 very different neighborhoods and districts and help them quickly connect biking networks. Find out how your city can apply here.