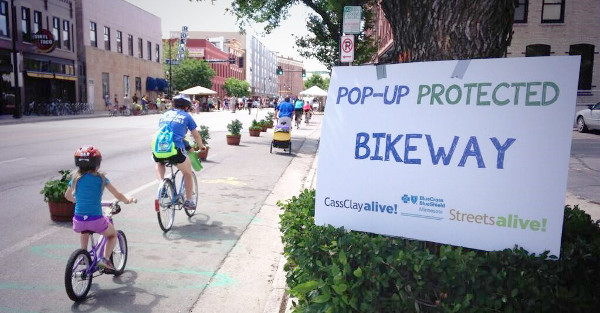 Around the country in the summer of 2014, community groups across the United States have been using open-streets events and other festivals to give thousands of Americans their first taste of a protected bike lane.

From small-town Kansas to the middle of Atlanta, communities (many of them inspired by last summer’s successful $600 demo project in Minneapolis) have been using handmade barriers and relatively tiny amounts of money to put together temporary bikeways that spread the knowledge of the concept among the public and officials.

“Every traffic engineer who touches a street in Oakland, they were all out on their bikes checking it out,” said Dave Campbell of East Bay Bike Coalition, who led the creation of maybe the year’s most beautiful demo on Telegraph Avenue there. (Click to enlarge — it’s worth it.)

“We wanted this to look awesome,” Campbell said in an interview. “People would see this and go, That’s f—— awesome. I want that on my street.“

Here are some of the results from around the country: 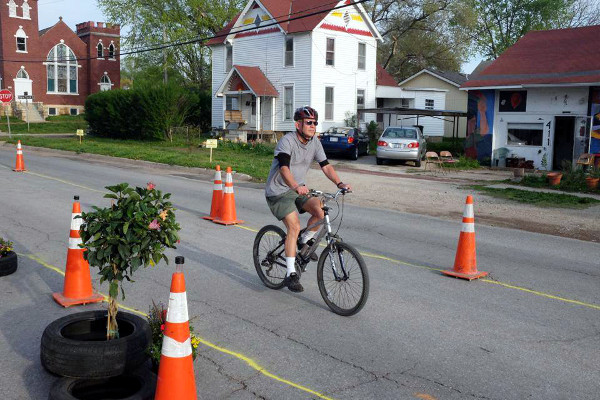 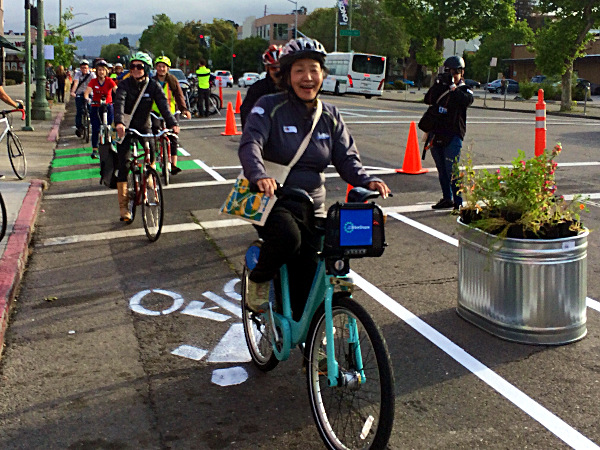 Advocacy group Bike East Bay also created a video of their impressive Telegraph setup, which used traffic chalk for the shark-tooth yield markings, plus one gallon of exterior green paint and a homemade bike stencil to mark the lane’s entrances. (Paint was possible because the local business district was already planning to pressure-wash the street afterward.) Here’s a full manual on how Campbell and friends did it. 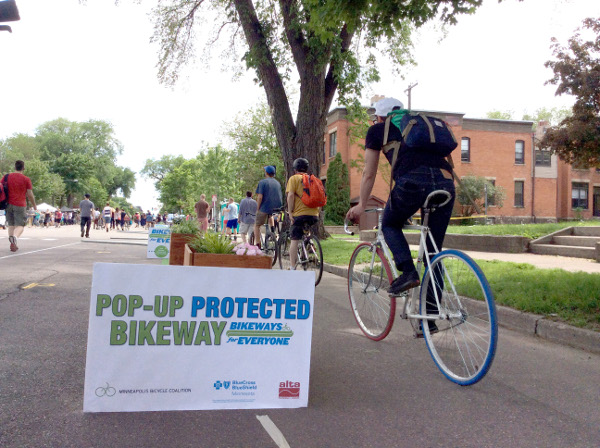 In Minneapolis, the advocacy campaign Bikeways for Everyone not only created a sequel to last year’s project, they added a demonstration of a protected bike lane intersection laid out personally by designer Nick Falbo of Alta Planning and Design: 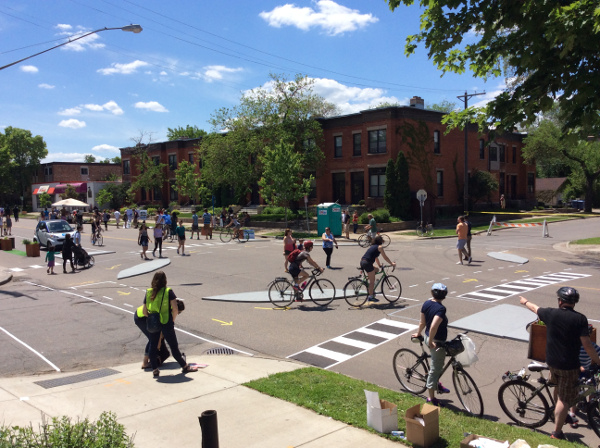 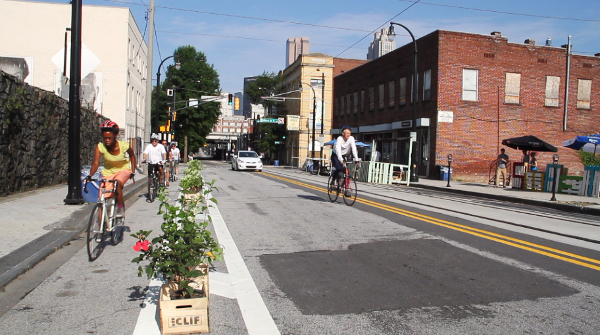 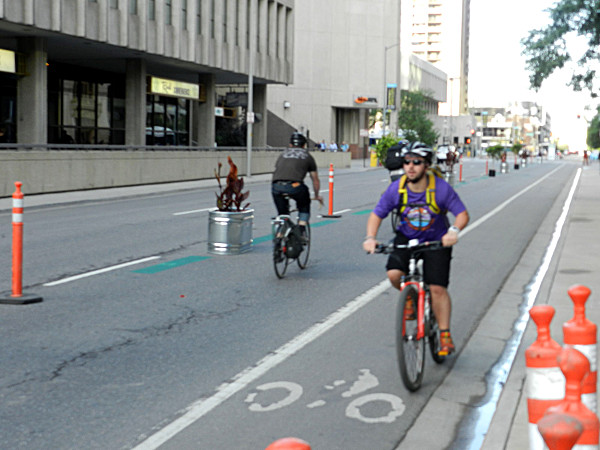 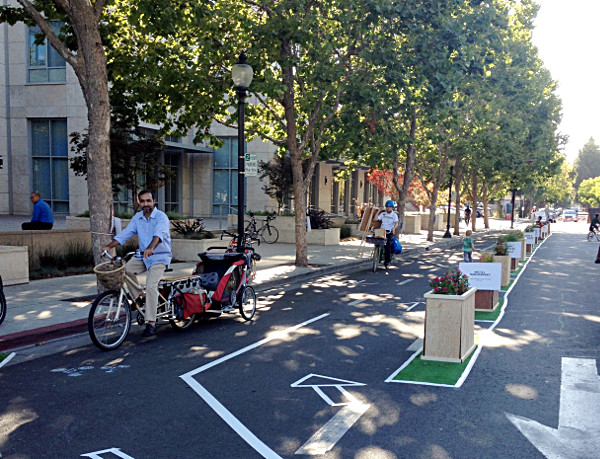 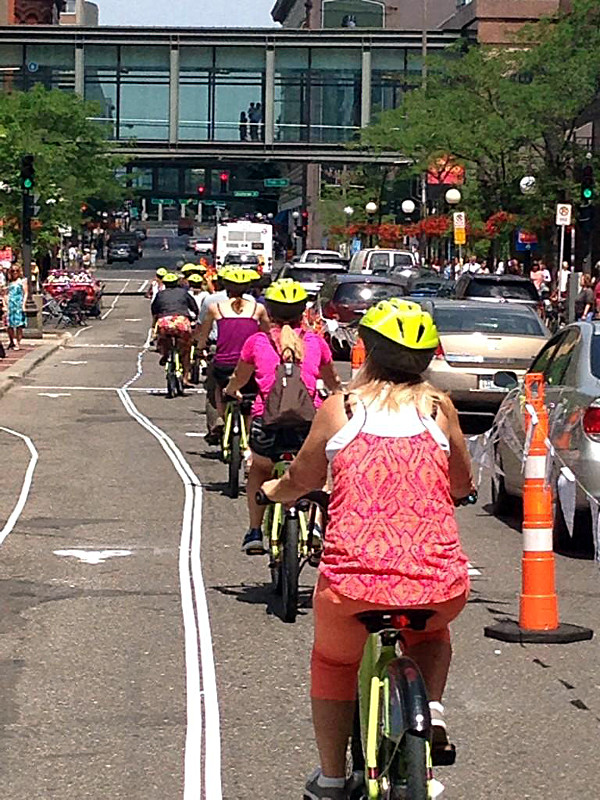 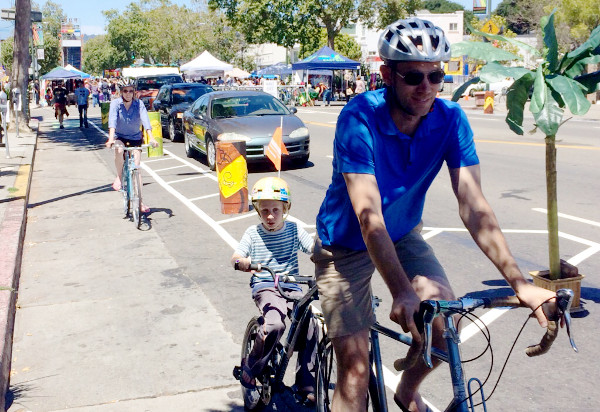 On both Temescal and Telegraph, Bike East Bay created simple, attractive barriers by flattening cardboard boxes, rolling them into cylinders with binder clips at the top and bottom and setting them on top of standard orange traffic cones. They also used 600 feet of four-inch-wide reflective white traffic tape, which cost 29 cents a foot, and (in lieu of green paint to mark the entrances) two 4′ x 20′ x 5 mm black rubberized floor mats, spray-painted green, for $170 each.

A few tips from the experts

Give people a reason to enter the demo lane. This is especially important at an open-streets event that doesn’t have car traffic on the street in the first place.

“Many people ignored the lane and stayed on the street,” wrote Alyssa Gullekson of the Dakota Medical Foundation in an email about a July 15 pop-up in Fargo, N.D. “At the next event in August, we will route bicycles into the lane so that that is the route is assumed most appropriate. We will also have an individual directing people into lane to draw more attention to it.”

Try to encourage conversations as well as the demo itself. In Mountain View, Calif., Safe Mountain View engineered longer conversations by offering a bike raffle, a free ice cream voucher for people who completed surveys and bike-themed coloring pages to entertain children “so the parents could talk to us with fewer distractions,” organizer Cherie Walkowiak wrote.

Here are PDFs of the explanatory posters they designed and some photos of the assembly process. Also, here’s a tally of their expenses from two pop-up events in Mountain View.

Do everything you can to get city staff there. For Campbell of Bike East Bay, the most rewarding moment of one of his demos was when a city engineer working on a permanent protected bike lane came by to watch people using the temporary one.

“He’s been designing this and analyzing it and talking to other people,” Campbell said. “And all of the sudden he’s standing there living it for a moment. You could see his facial expression has changed.”