We tend to think of our workplace achievements as things that happen on the job. Completing a project, clearing our inboxes of unread emails or getting through a meeting (or twelve). The National Bike Challenge offers another way to celebrate with your coworkers, giving participants the opportunity to create and join workplace teams and contribute to a collective point total. In addition to being the beginning of National Bike Month and the National Bike Challenge, May 4-8 is also Small Business Week. That means there’s no better time to celebrate a handful of the small businesses that have created workplace teams. From the obvious (bike shops) to the surprising (artisan candles) here are some workplace success stories that epitomize the best of what bicycling and small businesses have to offer.

Bike Cleveland and Bike Pittsburgh agree about bicycles, but don’t expect the same when it comes to football. It was the existing sports rivalry between the two cities that inspired the Rust Belt Challenge, a competition to see which city could accumulate more points in the National Bike Challenge. Century Cycles, a bike shop with three locations around Cleveland, got in on the action, forming a team comprised of both employees and customers. ?I think people enjoy looking at the ongoing standings and seeing how their mileage is comparing to people in their area and across the country,? explains Kevin Madzia, Century Cycles? IT Manager. Plus, having won the Rust Belt Challenge last year, they’re inspired to repeat. Century Cycles offers incentives to employees and Madzia says that the shops get some good promotional value for participating. He also would recommend participating to other small businesses. ?I would say, do it because it’s easy, it doesn’t cost anything and it’s a great way to get more people motivated to bike.? To celebrate the end of the Challenge, a ride is planned to Youngstown, Ohio, which is roughly halfway between Pittsburgh and Cleveland, where the Rust Cup will be presented.

A team of two

Bill and Sherry Reffell are the definition of a dynamic duo: They?re husband and wife, the only employees at Whistling Pete Embroidery, and a two-person National Bike Challenge workplace team. Their company’s lack of other employees hasn’t stopped them from being a force to reckon with when it comes to accumulating points. Their motivation started for a simple reason, ?I?m a little on the porky side,? says Bill, ?and I found last year that it made me feel a lot better.? Bill and Sherry ride 10 to 20 miles a day, to and from work, depending on the route they take, and they often meander through a local state park on the way to their custom embroidery business. They know they could easily ride to work without participating in the National Bike Challenge, but enjoy keeping track of their miles and being a part of something bigger. ?It might not seem like a lot every day,? explains Bill, ?but once you start seeing the miles rack up then the incentive is there just to keep doing it.? Having enjoyed the experience in 2014, Bill and Sherry are excited to be a part of the challenge again this year, and according to Bill their goal is simple: ?Beat last year’s total and lose a little more weight.? 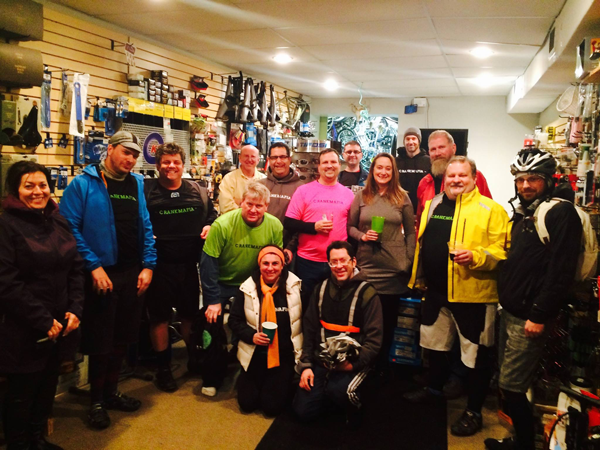 With almost three weeks to go before the start of the 2015 National Bike Challenge, Queen City Bicycles was already one of the most active bike shops participating. Bart Stetler, the owner of Queen City Bicycles, attributes this to an uptick in bike commuting in Charlotte, North Carolina. ?I?m a commuter,? he says, ?and I saw here in town a resurgence of people going out riding bikes.? With only four full-time employees, the majority of the Queen City Bicycles team is made up of customers. ?Last year we really focused on having a large team and getting people on bikes,? Stetler explains, ?and through that participation we saw all these different people get out that weren’t riding bikes a couple years ago.? Stetler says that social media and group rides have been essential tools in getting more people to join the team and he expects a similar level of participation this year. Being a small business, the National Bike Challenge allows him to connect with customers in a new way, but the most satisfaction comes from watching cycling grow in his community. ?It gets people on their bikes,? he says of the Challenge, ?it shows them that commuting is a lot easier than they think.?

Candles in the wind

?It’s not about winning, it’s more about engaging people.? This is what the National Bike Challenge boils down to according to Dan Catlin, co-owner of Middle Davids Artisan Candles, a small business in Franklin, Indiana. Known around town as a bike guy, Catlin and most of his staff of six already ride their bikes to work. For them, being a part of the Challenge added extra motivation on days they didn’t really want to ride. ?If it’s raining you think, ?maybe I?ll drive,? but then you say, ?no I?ll ride my bike because of the Bike Challenge?.? Catlin offered incentives to his employees, including gift certificates to local bike shops, for riding to work, and the positivity around bicycling rubbed off on everyone. One of his employees who didn’t sign up for the Challenge still starting riding to work. ?Everybody doesn’t have to participate but everyone can still benefit,? he says. The Middle Davids Artisan Candles team is participating again this year, but Catlin says they’re not doing it to attract more customers. ?I don’t care if it translates into revenue,? he says, ?it makes us a more important part of our community when we’re known for something other than dollars and cents.?

These are just a few of the small businesses participatiing in the National Bike Challenge. You can browse the entire list here, to see if any of your local favorites are signed up. If you own or work at a small business, it’s not too late to create your own team. Bike to work, ride at lunch, or meet your coworkers over the weekend. However you participate, the National Bike Challenge is sure to be the best part of your 9 to 5.