This is how bike progress happens: Each win begets the next 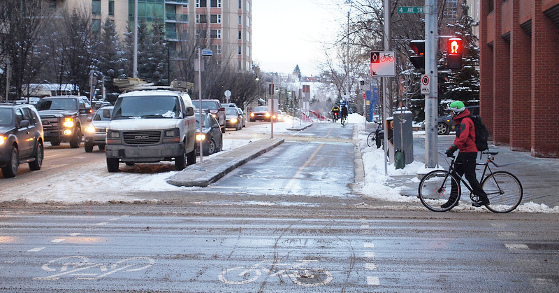 For people working to make biking safe and comfortable for more Americans, each step of the way can be frustrating. Is such-and-such improvement big enough to make a difference?

It’s a difficult dance. But Calgary, Alberta, is again proving that this dance is a two-step.

We’ve written a few times this winter about the surprising progress toward better biking that’s happening in this sprawling oiltown on the northwest edge of the Canadian prairie. On Friday, the Calgary Herald’s Pedals blog reported on something new: a race in the local commercial real estate business to build better on-site bike amenities.

In the midst of the latest downtown building boom, developers of a new generation of office towers and skyscrapers have quietly embraced cycling. Nearly every incoming major commercial development downtown is being designed with extensive facilities for cyclists, from expansive areas for secure bike parking to huge shower and locker facilities inside. …

Some may see it as a tad ironic that companies in the heart of the country’s oilpatch are leading the charge for accommodating cyclists, but Schofield says she hears from big energy companies who like the idea because it makes for a healthier workforce, it helps them meet their green initiatives, and their employees are asking for it.

The space dedicated to bikes is relatively small compared to that given to automobiles — Brookfield Place has plans for 1,100 parking stalls compared to 500 bike spaces, while The Bow has 1,300 parking spaces compared to space for 320 bikes — but there are other reasons that accommodating bikes can make sense for employers. With thousands of more office spaces planned in the coming years downtown, thousands of more cars are going to be crammed onto already busy streets, and expensive parking stalls are unlikely to get cheaper. Cycling, even on a small scale, can help reduce both burdens on downtown employees.

In one sense, this is just a case of Calgary developers doing exactly what they get paid to do: keep tabs on the needs of their prospective tenants and the trends in their market. But it’s also easy to see how things like this can snowball. Good bike recreation events and quality infrastructure like the popular Seventh Street SW protected bike lane boost ridership enough to catch developers’ attention, which leads to better bike parking, which makes bike commuting more pleasant, which leads to more bike commuters, which leads to more political support for street improvements.

As in so many North American cities, it’s clear that momentum for better biking is building in Calgary. The real question is how fast things will move from here on out.