Three charts for protected bike lane designers to remember in 2015 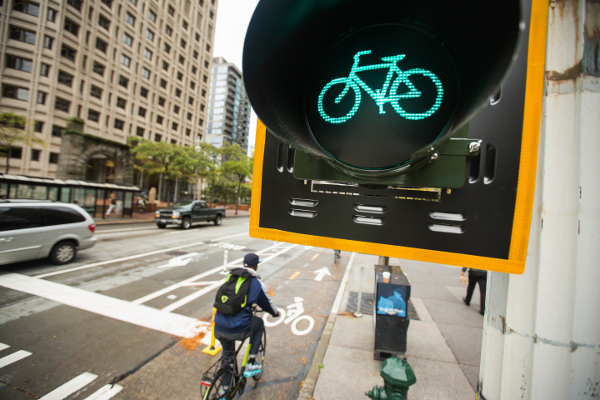 A couple weeks ago we wrote about our newly updated statistics page, to which we’ve added the best factoids of 2014 for helping explain the benefits of protected bike lanes.

But 2014 also offered some lessons for people within the protected bike lane movement. 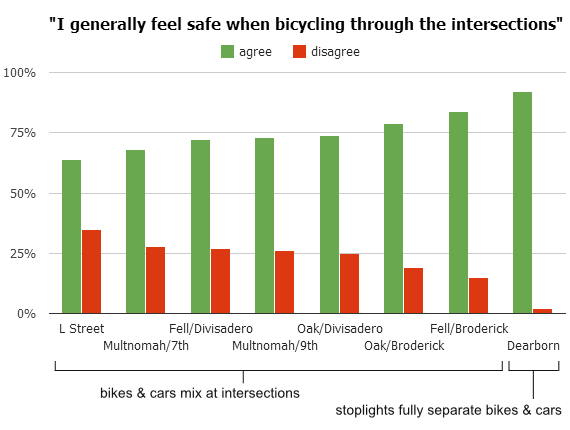 Until the protected intersection takes off in the United States (more on that in a few days) there are two basic ways to handle the intersection conflict between bikes that are going straight and cars that are about to turn. One of them is more popular than the other.

The less popular method is to direct both vehicles to merge into a combination turn lane/bike lane. The more popular one, which remains rarely used, is to use special traffic signals that force people in cars to stop turning while bikes are crossing.

As the chart above shows, most people biking tend to feel safe in both situations, but the most sensitive riders — the ones that protected bike lanes are supposed to appeal to in the first place — strongly prefer signalized separation as seen on Chicago’s Dearborn Street, Seattle’s 2nd Avenue or the Indianapolis Cultural Trail. (It’s no coincidence that these three all ranked in the top two slots of our “best new bike lanes” lists in 2013 and 2014.)

U.S. intersection design continues to develop, and mixing zone designs have been getting better. (Here’s what the best-performing mixing zone, at Fell and Broderick in San Francisco, looks like; compare that to the worst-performing, on L Street in Washington DC.) In any case, engineers should remember that the whole point of protected bike lanes is to make biking feel safe for people who don’t already ride. Designs won’t work unless they achieve this.

2) When it comes to comfort, people say plastic posts are as good as curbs

For us on the Green Lane Project team, one of the biggest surprises of 2014 was that a bike lane separated from cars by a “2-3 foot buffer with plastic flexposts” makes people feel more comfortable biking than anything else except a row of planters.

The finding came from a survey of people riding in many different protected bike lanes around the country. (For this question, the people were looking at a series of renderings, which you can see on p. 146 of this PDF.) The finding was (like all three of these) deep within a landmark report released in early June by the National Institute for Transportation and Communities.

As anyone who’s compared the costs of bike lane separation methods knows, a cast-in-place curb is much more expensive to install than a row of plastic posts. So this should be comforting news to cities that have, like Washington DC, Chicago and Pittsburgh, used flexposts to install physical separation as cheaply as possible.

The true downside of flexposts, as cities have also found, is that they’re easily destroyed. After seeing its posts torn up last winter by plows and skidding drivers, Chicago sent crews out to temporarily remove the posts from the streets, to be reinstalled next spring. That’s probably wise, but it only takes a few years of that before a city starts looking again at the cost of installing something more durable.

A more detailed federal study of this issue, probably with different methodology, is set to begin this year. We eagerly await the findings.

3) Most people like protected bike lanes. But some people hate them.

This chart isn’t news to anyone who’s ever installed a significant biking project. But it’s something that officials need to be prepared for every time. Even in the centrally located, already-multimodal neighborhoods that most existing protected bike lanes have been built in, some residents are convinced that any street space not dedicated on cars is bad for a neighborhood. And protected bike lane skeptics may well be more passionate and noisy than protected bike lane fans.

The lesson of this chart isn’t to live in fear of a vocal minority. It’s just a reminder that with any project as visible and meaningful as a protected bike lane, some people will see themselves as winners and others will see themselves as losers. And also that another group — about the same size as the self-identified winners — can be swung either way depending on their perception of why the project was built.

The ridership impacts of protected bike lanes prove that they’re worth fighting for. But cities shouldn’t build them without a plan to explain why a connected network of low-stress bike routes will make everyone a winner.

“It’s sort of like ripping that Band-Aid out really quick,” Pittsburgh Mayor Bill Peduto said in September about his plans to rapidly install a simple protected bike lane network over the course of his first term. “We knew there was going to be this pushback, but we wanted to show it [the new protected lane] and let people see it. That type of a reaction starts to dissipate and go down over time. That’s the tradeoff.”

As we’ll show in a post later today, 2014 was a very big year for protected lanes. But here in the United States, these designs are still in their infancy. We’re sure that 2015 will bring new findings that move this concept toward maturity, and we look forward to sharing them with you all year, right here.