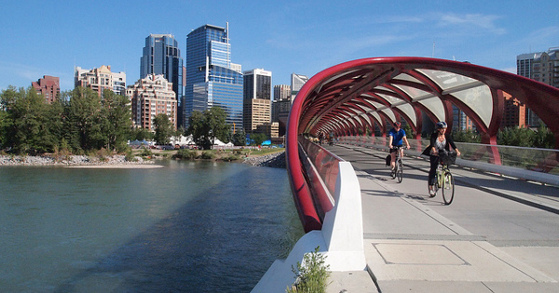 The Peace Bridge outside downtown Calgary. Photos by Bike Calgary.

Though many North American cities now have downtown grids of protected bike lanes in their official plans, only three north of the Rio Grande have actually gotten connected networks on the ground: Indianapolis, Montreal and Vancouver.

As of Monday afternoon, get ready to add a third Canadian city to the list: Calgary.

When we wrote in February that this unlikely Alberta oiltown could be the best bike city on the Great Plains by 2018, we didn’t expect things to come together so fast. But thanks to an enthusiastic mayor, committed city staff and a relentless campaign by advocacy group Bike Calgary, they have.

Cheered on by Calgarians for Cycle Tracks, which started as a five-person advocacy team but swelled to 30 and attracted 1,500 Facebook followers in four weeks, Calgary’s city council on Monday voted 8-7 to put $7.5 million into a one-year pilot of three new protected bike lanes, plus a stub of a fourth, that will lattice through the business district starting next spring. They’ll be joining the existing protected bike lane on 7th Street and a possible future project on 8th Street.

There were legitimate disagreements among Calgary bike advocates over whether these are actually the best streets for such a pilot. But for non-locals looking to learn from this sweeping victory for increasing the appeal of biking, there are three key lessons here. 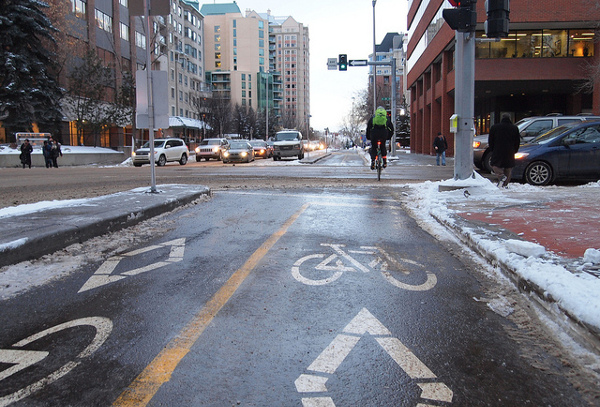 Calgary’s 7th Street protected bike lane is of permanent quality, but not every project needs to start that way.

Calgary lifted one of its tricks from New York City, Memphis, Portland and other cities that have discovered one of the big advantages of bike infrastructure: it’s nonbinding. If you don’t get a bike lane right at first, even a relatively expensive protected lane, it’s not cripplingly expensive to do it over.

That fact gives bike planners the freedom to make a promise that highway planners, for example, have never had: hey, if things go wrong, we can remove it next year. That’s what Calgary is promising its citizens, setting a general goal (according to the Calgary Herald) to “double or triple the number of downtown cyclists” over last year’s peak counts.

The rightmost north-south route was not approved by city council Monday, but other green-marked streets were.

A quick-and-dirty, half-cost temporary version of Calgary’s plan also opened the door to a useful possibility: putting more lanes on the ground at once.

“Originally what was being pitched is they were going to build two cycle tracks per year,” Bike Calgary President Kimberley Nelson said in an interview last week. “Mayor Nenshi and a couple of the councillors were looking at it, and they said it’s not going to be a true test unless the whole network is up in one go.”

That’s a savvy understanding of how new transportation systems work. Like any network — a subway system, a shopping mall, the Internet — each extra location to which a protected bike lane grid connects adds more value to the system than the last. By making sure Calgary’s starter grid will cover more ground than first planned, the city’s leaders are boosting its value exponentially and increasing the chance that it’ll be well-used a year from now, when the pilot is up for renewal.

It’s worth noting here that part of the mayor’s proposed network, 1st Street S.E., was voted down Monday by a coalition of mostly suburban council members worried that removing a general traffic lane there would cause congestion. Even at its best, Calgary’s starter network will be more of a sideways H than the cross-hatch grid envisioned.

3) Diverse advocacy is the best advocacy. 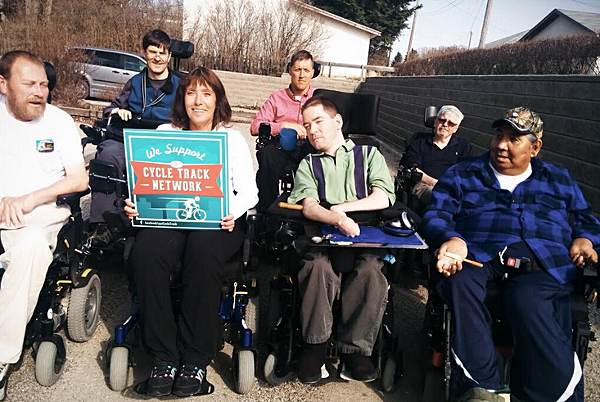 The 4th Dimension Group Home was one of many groups recruited by Bike Calgary to show support.

In the world of politics, there’s nothing quite so persuasive as unexpected bedfellows. In the lead-up to the vote, Bike Calgary ran a best-of-class social media campaign that featured local businesses, groups and community leaders holding a “We support the cycle track network” sign and simultaneously rallied every possible voice in favor of the bike network to post testimonies on its website. For example, here’s four-time Olympic medalist Denny Morrison:

Separated bike lanes in the City Centre will make cycling an option for everyone, not just hardcore cyclists and athletes.

The number of individuals living with diabetes has almost doubled in the last decade. Heart disease and hypertension are also increasing. … Providing safer, more accessible opportunities for cycling would encourage more individuals to cycle, and would therefore contribute to the health of Calgarians.

Approximately 70% of our pass holders travel by bicycle during the festival compared to only 17% by car.

With the most expensive parking in Canada, our citizens have already shown us they would happily utilize this healthy and fun mode of transportation.

As our cities grow, so do our opportunities for the sharing of knowledge, ideas and creativity. … Unfortunately, supporting car travel above alternative transportation will always be at odds with the social city. … It is our responsibility as City builders to ensure that the infrastructure we support also supports the positive growth of the social fabric that is so crucial to the success of urban life.

Why is spending $42 million to build barely a kilometre of road on a route that was being driven by just 5,000 vehicles per day no issue at all, while between $9.3 million and $14.5 million spent on 7.6 kilometres of cycle track … has become a source of scrutiny and ferocious debate?

Every bike believer can rattle off the huge range of ways bike transportation helps a city. But by lining up experts to speak for each of them, Bike Calgary helped make all those arguments the parents of one of the best central-city bike networks on the continent.