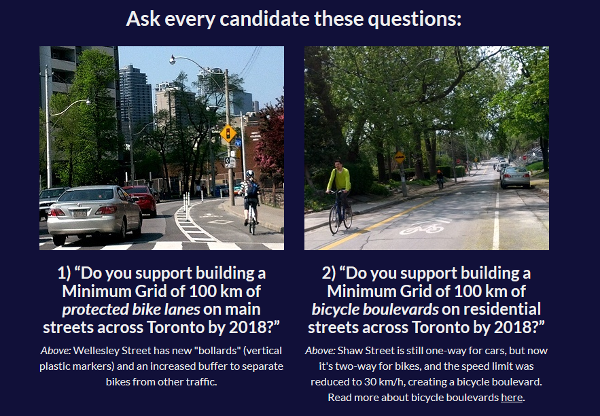 Almost all urban politicians will tell you they think bikes are great. But only some actually do anything to make biking more popular.

The campaign, led by advocacy group Cycle Toronto and given its name by international walking-bicycling advocate Gil Penalosa, is called “#MinimumGrid.” And it seems to be working: last week, 80 percent of responding city council candidates, including more than half of the council’s incumbents, said they supported building such a system by 2018.

Speaking this month at the Pro Walk Pro Bike Pro Place conference in Pittsburgh, Penalosa (a Toronto resident) explained the concept: to move cities from symbolic investments in bike transportation to truly transformative ones.

“We focus on the nice-to-have,” Penalosa said in his keynote address at the conference. “Signage, maps, parking, bike racks, shelters. Does anyone not bike because they don’t have maps?”

Those amenities “might make it nicer for the 1 or 2 percent” who currently bike regularly, he said. But “nice-to-haves” won’t deliver the broader public benefits that can come from actually making biking mainstream.

“What are the must-haves?” Penalosa went on. “Two things. One is we have to lower the speed in the neighborhoods. And two, we need to create a network. A minimum grid.”

‘I don’t care if you love bikes’

With their campaign, Cycle Toronto and Penalosa are tapping an idea that’s rising to the forefront of the North American urban transportation movement: that making biking a viable transportation option depends on creating a fully connected grid of protected bike lanes on busy streets and bicycle boulevards through quiet neighborhoods.

Rapidly installing full networks of protected lanes rapidly transformed Seville in the 2000s (it jumped from 0.5 percent of trips by bike to about 7 percent) and is now doing the same in Buenos Aires (from 0.3 percent to 3.2 percent, Penalosa said).

For next month’s municipal election, Toronto biking advocates are trying to similarly focus politicians’ attention by rallying around the concept of 100 km of protected bike lanes and 100 km of bike boulevards.

If you’re talking to a politician, Penalosa advised, “don’t ask him for one bikeway here or a bike rack. Because it’s going to take us 100 years.” And don’t let him say “Oh, I love bikes!” 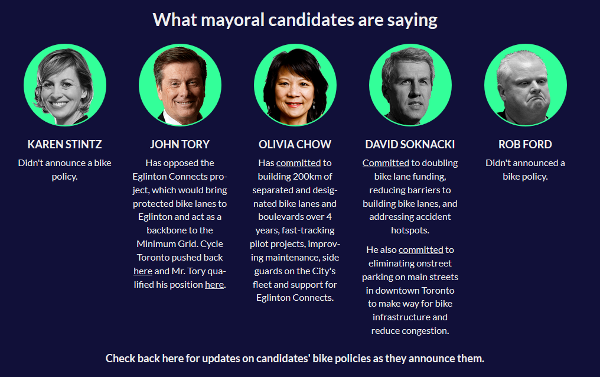 North Americans know how to create protected bike lanes, Penalosa noted: about 200 are now on the ground in 24 U.S. states and five Canadian provinces. And we know how to pay for them; they cost peanuts compared to almost every other transportation project.

“This is not a technical issue,” he said. “It’s not a financial issue. It’s a political issue.”

The solution to a political problem, Penalosa said, must be political action.

“We need to raise our voices wherever we are,” Penalosa went on. “We’ve got to send emails to the politicians. We’ve got to write letters to the editor. We’ve got to run for office.”

Streetsblog writer Payton Chung contributed reporting. The Green Lane Project is a PeopleForBikes program that helps U.S. cities build better bike lanes to create low-stress streets. You can follow us on Twitter or Facebook or sign up for our weekly news digest about protected bike lanes. Story tip? Write michael@peopleforbikes.org.