‘Transformative projects have tradeoffs’: the LA Times tells it like it is 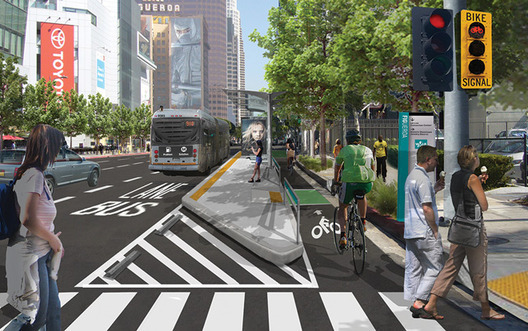 City rendering of the My Figueroa project connecting downtown Los Angeles to USC.

Arguments for protected bike lanes don’t get much simpler, or much more persuasive, than the one mounted yesterday by the Los Angeles Times in its endorsement of a long-delayed plan to redesign Figueroa Street for better biking and walking.

The concern of local businesses and institutions is understandable. The “My Figueroa” project is the first of its kind in Los Angeles. Transportation engineers predict that it will take longer to drive those four miles, but they can’t say how much longer. Case studies suggest traffic congestion caused by a road diet will ease over time as drivers try other routes or choose to cycle, walk or take the bus. But there may also be real, negative effects for long-established stakeholders on Figueroa. Transformative projects have trade-offs.

While it is perfectly reasonable to consider the concerns and to try to reach compromises, however cars should not get veto authority. The city’s 2010 bicycle plan identified Figueroa as part of the Backbone Bicycle Network, those streets identified as key arterials for cyclists. Figueroa has the added benefit of providing a straight, safe route between two established biking communities — USC and downtown. This is exactly where Los Angeles should be replacing car lanes with cycle tracks and buffered bike lanes.

It’s not strange that incumbent businesses, like the handful that have thrown their weight against the Figueroa plan, tend to favor the status quo. The status quo is, after all, allowing them to make a living. Change means risk; to a business owner, change is guilty until proven otherwise. Risk-averse businesses aren’t being evil; they’re being rational.

But the work of city-building isn’t to persuade a subset of business owners that a plan is guaranteed to help them personally. It’s to prove to the broader public that in the long run, the change will be good.

And you can’t persuade the public without presenting it with real choices. Wednesday’s Times endorsement, to its credit, does exactly that.