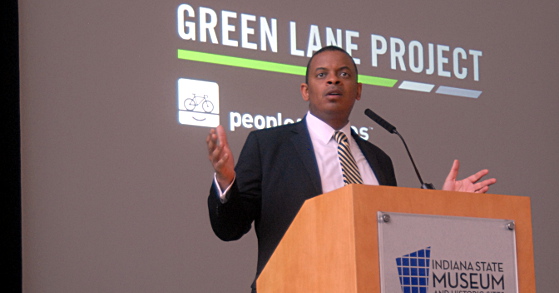 U.S. Transportation Secretary Anthony Foxx praised bike infrastructure as a way to get more value out of existing U.S. streets.

Staring down a highway trust fund that he described as “teetering toward insolvency” by August or September, U.S. Transportation Secretary Anthony Foxx said Monday that better bike infrastructure projects are part of the solution.

“When you have a swelling population like the USA has and will have for the next 35 years, one of the most cost-effective ways to better fit that population is to better use the existing grid,” Foxx said.

Foxx made his comments to a gathering in Indianapolis of urban transportation experts from around the country, welcoming six new cities into the PeopleForBikes Green Lane Project, a two-year program kicking off Tuesday that will help the cities — Atlanta, Boston, Denver, Indianapolis, Pittsburgh and Seattle — add modern protected bike lanes to their streets.

“I know you are the vanguard in many ways on these issues, and we at USDOT want to do everything we can to be supportive,” Foxx told the crowd.

“This city is on fire,” Roskowski said. “You look at the Cultural Trail, you look at the other projects in the works. … You don’t really know that you’re at a tipping point until later.”

Roskowski praised Indianapolis Mayor Greg Ballard, a Republican, for six years at the front of an Indianapolis transformation that has seen the city use better bike infrastructure “to be resilient, to be sustainable, to be competitive and to be beautiful.”

“Five years from now we’re going to look back and say, we really changed how we thought about transportation in America,” Roskowski said. “Yes, we’re all going to drive cars still. But there are other elements to transportation.” 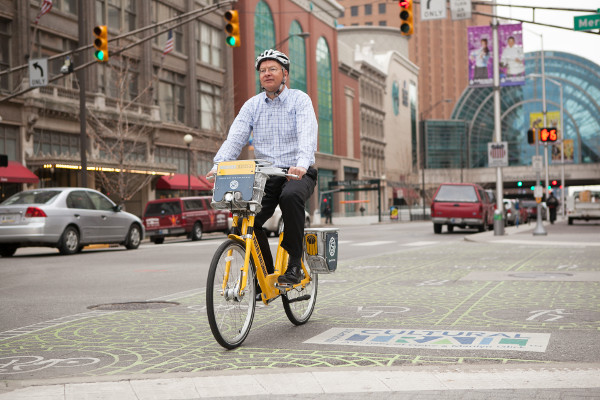 Launched in 2012, the Green Lane Project works with U.S. cities interested in quickly installing protected bike lanes. The on-street lanes, separated from traffic by curbs, planters, parked cars or posts, help organize the street and aim to make riding a bike an appealing option for people of all ages and abilities. Selected cities receive financial, strategic and technical assistance from the Green Lane Project in building protected bike lanes, valued at more than $250,000 each.

In the last two years, the number of protected lane projects on the ground around the country has nearly doubled. The country’s first multi-city study of the ridership, safety and political performance of protected bike lanes, completed by the Oregon Transportation Research and Education Consortium at Portland State University, will be released early next month.

Here’s a brief look at each of the six cities selected to join this year’s cohort. We’ll be spending the next month filling out some of these stories and taking a close look at how each city has landed in a leading role on bike infrastructure.

Atlanta’s work on better bike infrastructure has just begun, but its plans are ambitious. A robust network of protected bike lanes will link downtown to the popular Beltline Trail. With strong leadership from Mayor Kasim Reed, Atlanta has 15 protected lane projects in the works, using a wide array of public/private partnerships to speed project delivery. Coca-Cola is supporting a protected lane in front of its headquarters and is supporting the construction of new lanes to link to a second downtown location with 2,000 employees recently relocated from the suburbs.

With its 113,000 university students, compact urban form, robust but jam-packed public transit system and its even more crowded freeways, Boston biking has already made rapid leaps in the last few years with relatively small investments. Two high-visibility, high-impact downtown projects are in the works that will change the way Bostonians and visitors experience the city, whether they ride a bike or not. Coupled with the successful Hubway bike share system, the Connect Historic Boston project will be a national showcase for protected bike lanes.

One of the nation’s most physically active cities, Denver has a solid bike network with its off-road paths and more than 100 miles of bike lanes. The City is now embarking on an ambitious mission to make the street system accessible to more users with a network of bike boulevards and protected bike lanes. As central Denver booms, the Downtown Denver Partnership is encouraging the city to add protected lanes as an economic development strategy to attract tech companies and other employers. The business group has helped fund a master plan for protected lanes downtown that will make Denver a model for other growing Western cities.

The success of the Indianapolis Cultural Trail, which is a national model for public-private partnership to create a revitalizing landmark destination, has inspired an ambitious list of further projects. Mayor Greg Ballard, who sees bike infrastructure investments as an economic growth strategy, is among the most bike friendly leaders in the country. His advocacy and the Cultural Trail’s popularity have created broad community recognition of great bike infrastructure’s benefits.

This city has the winters of Minneapolis, the hills of San Francisco, the narrow streets of Boston, and the long-term population and tax base decline of other rust belt cities. Yet it is poised to succeed on bikes in spite of its challenges. Mayor Bill Peduto is bold, ambitious and has publicly committed to Pittsburgh’s first protected lane projects with strong support from many local business and community leaders. This fall, Pittsburgh will be the epicenter of protected bike lane information when it hosts the ProWalk/ProBike conference. Bikes are an integral part of Pittsburgh’s inspiring resurgence.

Seattle’s newly adopted Bicycle Master Plan is a national model of what it takes to build a bike network for all ages and abilities, with sophisticated network planning that uses protected lanes as the tool for busy streets that are essential to the network. The ambitious multi-modal redesign of Broadway combines a two-way protected bike lane with streetcar and storm water management along a booming commercial corridor. Amazon is moving a significant portion of its operations into downtown Seattle and is building a protected lane at its front door.