Why is kids’ bike safety soaring? It’s not that kids are biking less 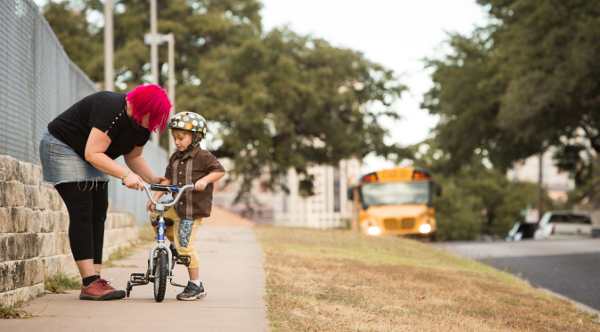 Last month, a fresh analysis from the Centers for Disease Control and Prevention shared some potentially terrific news: youth biking fatalities have plummeted 90 percent since 1977. 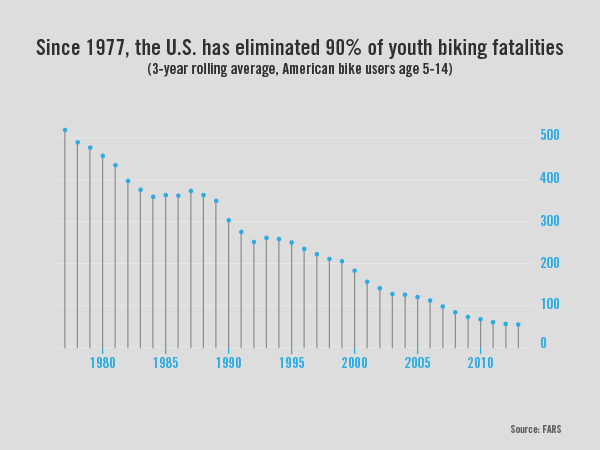 It seemed like such outlandishly good news that a shade of doubt hovered over the data. Surely, many figured, much of that decline came from the collapse of biking in cloistered modern childhoods. Here’s how Bloomberg Business covered the story:

The rate of cycling deaths among American children under the age of 15 has fallen 92 percent since 1975. That doesn’t mean the roads are safer?it may just mean kids are riding bikes less.

So we talked to the author of the CDC study, then looped in several of the country’s leading bike academics, then spent a few days deep inside 40 years of federal data. What we found was startling even to us.

The best numbers available suggest that today’s American kids bike as much – if not more – than kids did in the mid-1970s.

Surprised? We were. The same federal surveys that measure overall bike use have specifically tracked biking and walking to school. Here’s what they’ve found: 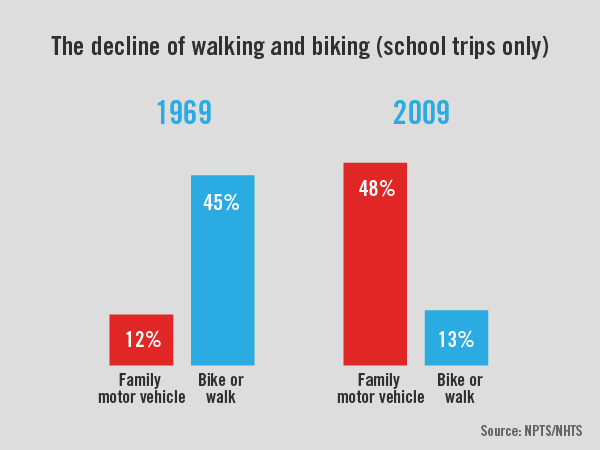 This decline in biking to school is all too real. Even as American adults have begun biking more for their main daily transportation, their kids have been biking less. That’s the bad news.

The good news is that kids seem to be biking about as much as they used to, and maybe more, for recreation.

Every academic we checked with — Jason Vargo of the University of Wisconsin, Ralph Buehler of Virginia Tech, John Pucher of Rutgers, Noreen McDonald of the University of North Carolina — agreed about the best available set of data on this question: the U.S. Department of Transportation’s National Personal Travel Survey and its successor, the National Household Travel Survey. Every five to eight years since 1969, it’s asked a statistically useful sample of Americans how they’ve moved around over the previous few days.

Here’s what it says about overall youth biking rates, including school and non-school trips: 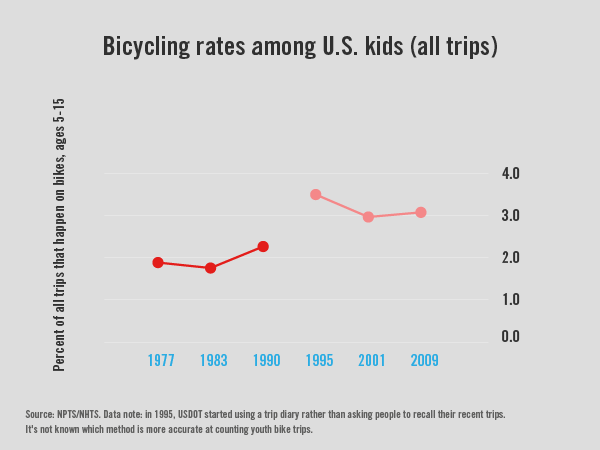 Here’s our takeaway from this chart: the proportion of American children’s trips that happen on a bicycle is actually fairly stable.

As the chart notes, there are some things to be careful about here. So we’re going to get technical for a moment. If you don’t care, skip to the big bold text below.

1) Most importantly: in 1995, the NPTS switched from relying on people’s memories to asking them to record a trip diary, and also started reminding people in the same household about the travel choices of their family members. These changes led to big changes in (for example) the number of shopping trips people reported. Unfortunately, we don’t know exactly what impact it may have had on reporting biking trips. But this was a big enough change that USDOT recommends against comparing numbers before 1995 with those after.

2) In 2001, the NHTS started including the phrase “including bicycling and walking” in its interviews, an effort to remind people not to omit those trips. This and a few other tweaks led to a spike that year in reported walking trips, though not much change in reported biking trips.

What can we take away from this? Because of these changes in methodology, especially the fact that most of the seeming growth in biking came in the same year that NPTS made a big methodology change, we don’t think it’s safe to compare the data from 1990 and before to the data from 1995 and after.

Unless the X-factors listed above almost perfectly counteracted the supposed decline in youth biking, the likeliest explanation here is:

Despite the well-documented drop in biking to school, overall youth biking has probably not dropped much since the mid-1970s.

This was so surprising to us that we looked at another data source: youth bike sales.

Guess what? We found the same thing. Though this data set goes back only to 1992, it also shows that the number of kids’ bikes sold per kid rose somewhat in the 1990s and (except for an odd spike in 2000) has been basically flat since. 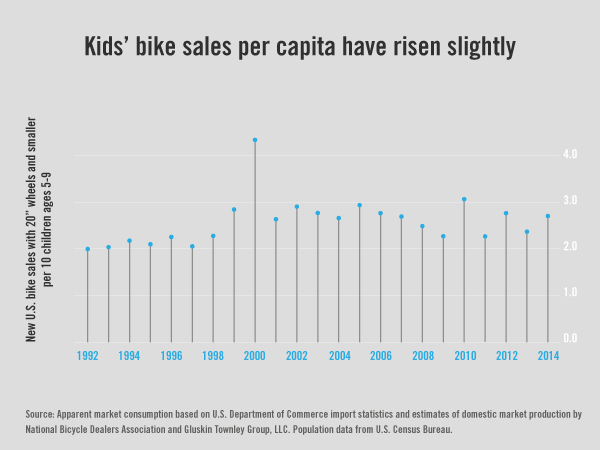 This chart already accounts for population growth. (Here’s the source data, which comes in part from sales figures published here.) The number of U.S. kids aged 5-9 has been basically flat since 2000, and so have unit sales of small-wheel bikes.

Here’s an important note: none of these numbers mean that just as many children are biking. All of this data might describe a world where fewer children are biking, but the ones who do bike are riding more. That’s more or less what’s been happening among adults.

Even so, it seems safe to conclude this:

As a whole, American kids are still getting on bikes about as often as their parents did. 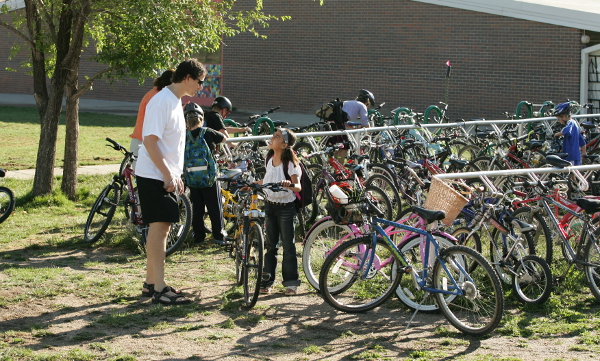 Here’s one of the reasons it’s a big deal: it means that the youth biking fatality figures listed above are not actually the result of rapidly falling bike use among kids. They’re the result of colossal improvements in youth bike safety over the last 40 years.

If you include the federal estimates of bike trips by kids over the years, here’s what the safety trend looks like: 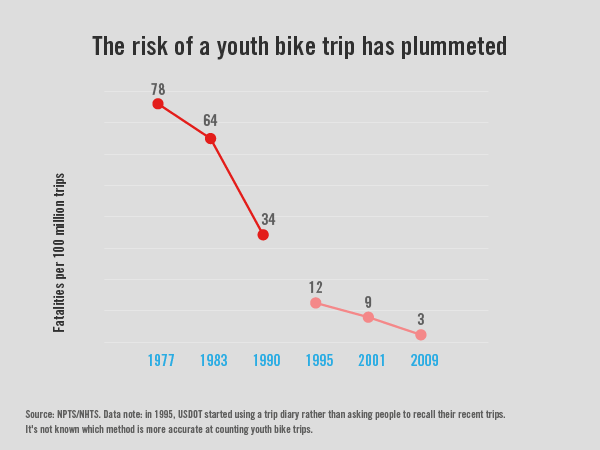 Even a shadow of this trend would be nothing less than a massive victory for youth safety. But what could be causing it?

Several of the experts we spoke with suggested the same suspect: off-street paths. 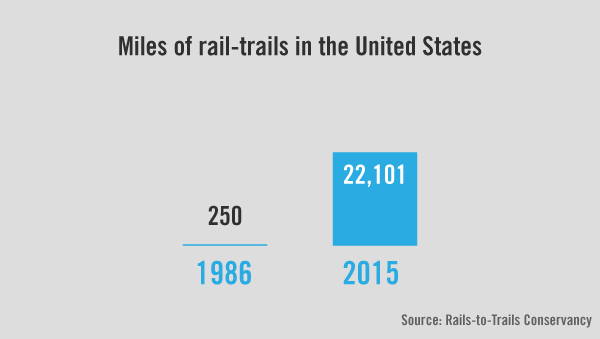 “There has been a huge increase in off-road ped/bike greenways/trails,” said John Pucher, a professor emeritus at Rutgers University and co-editor of the anthology City Cycling. “Here in Raleigh, we have over 200 miles. I think most of the growth in bicycling, at least here in the South, has been recreational/sport/exercise cycling on off-road paths, and fatalities on such trails are very rare, since there is little chance of collision with a motor vehicle.” 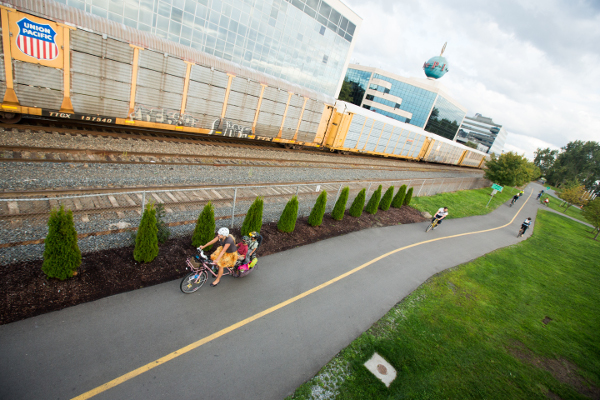 “Every single referendum for the greenways has been approved,” he said. “And if you look at who uses the greenways, it’s everybody. I see every race, gender, age group, income level, ethnicity.”

“The period of 1975 to now is a time of great consolidation of schools, relocation of neighborhood schools to the periphery, the rise of larger junior highs, open enrollment and magnet schools,” Neufeld said. “School trip distances have skyrocketed and even with the remaining short trips, parents have become fearful of allowing kids to ride to school. — But kids still like bikes, parents still buy bikes, kids still ride. They just do so on sidewalks, trails, parks, playgrounds and with parents.”

Neufeld’s theory fits neatly with one of the most intriguing discoveries in a national survey PeopleForBikes conducted last winter. It found that adults with children are 50% more likely to bike than adults without. 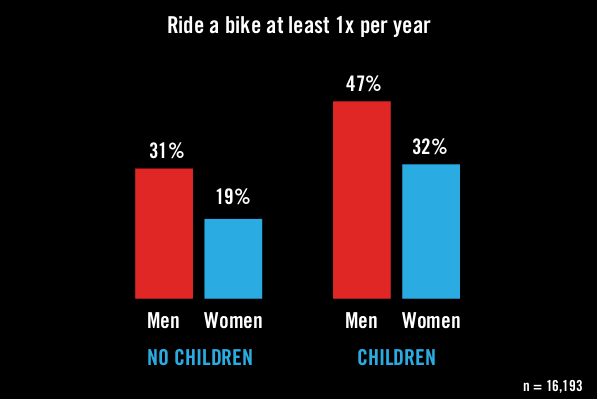 There’s no hard evidence that off-road paths are what’s kept youth biking popular. But there’s no dispute that the United States has built tens of thousands of miles of them since 1975 — and there’s maybe no likelier explanation for the steep decline in youth fatalities.

Another possibility: maybe the average young biker of today is better schooled in bike safety. Also, auto fatalities of every sort have fallen, though not by nearly this much. Please add your own theories in the comments.

In any case, let’s take a moment to recognize everyone finding the money to build so many off-street paths. They’ve played a central role in keeping the American tradition of youth biking very much alive.

All of this still leaves the country with a big problem, though: How can America give its kids the best of both worlds?

How can we make it convenient to bike to school the way your grandparents did, but with full safety and comfort?

At PeopleForBikes, our #1 answer is the same as our answer about Americans of every age. To make everyday bicycling better and safer, we should simply follow the example of the world’s best and safest cities to bike in.

We should add connected networks of protected bike lanes to our streets and make sure they link seamlessly with our ever-growing network of off-street paths. 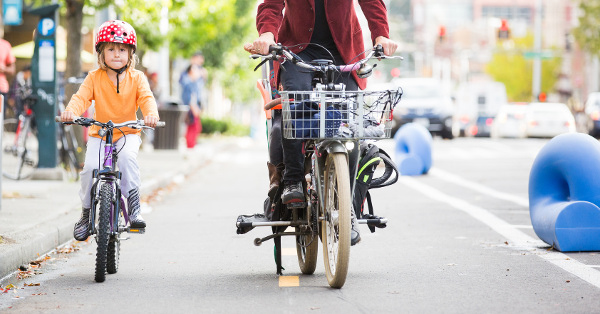 And here’s the last bit of good news: that’s exactly what just about every major city in the country is doing right now. 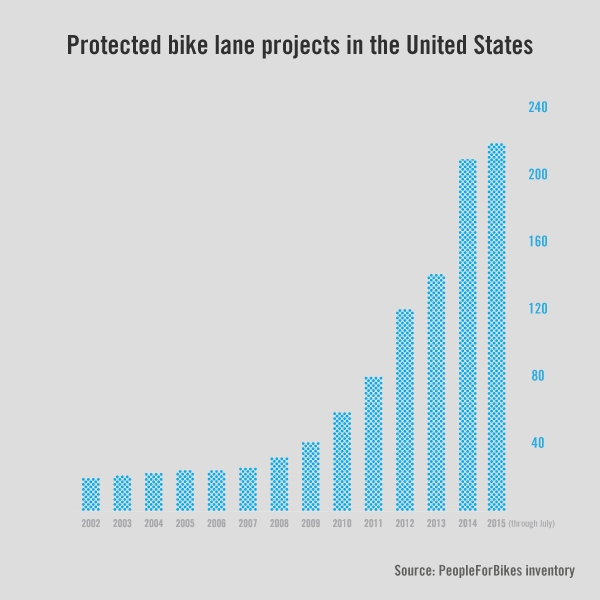 Stay tuned — we can’t wait to see what all these charts are going to look like in 2025.