With NACTO guide endorsement, California transportation could be changing fast 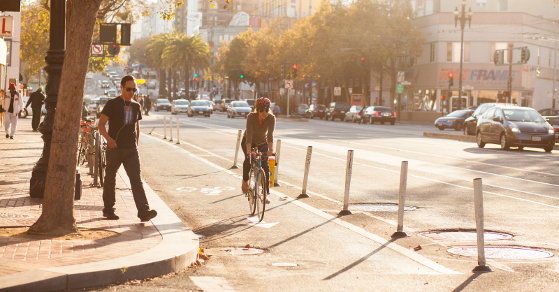 Market Street in San Francisco, a protected bike lane built in defiance of the state’s former refusal to endorse such facilities.

Four months after a scorching external report called on California’s transportation department to change its ways, that’s exactly what seems to be happening.

In an announcement Thursday night reported on Twitter by the National Association of City Transportation Officials and on Facebook by Fremont Public Works Director Bryan Jones, the head of the country’s largest highway department said his agency will officially endorse NACTO’s street design guide, a document that tracks the best practices for adding protected bike lanes and other human-oriented infrastructure to U.S. streets.

On his website of Caltrans criticism, Dan Allison called it “about the biggest news imaginable.”

“This is the culmination of three years of a long and targeted campaign of ours and we’re pretty psyched,” said Dave Snyder, executive director of the California Bicycle Coalition.

The fact that the nation’s largest state will be the third (after Washington and Massachusetts) to officially endorse NACTO’s Urban Street Design Guide is a major victory for biking and walking infrastruture advocates in California. It’s likely to assure hundreds of small and mid-size Californian cities that they won’t face extra liability if they install properly designed protected bike lanes.

“Without design guidance from our state DOT, planners’ and engineers’ hands are tied in what they’re allowed to do,” Bay Area active transportation planner Sean Co told us in an interview last fall. Caltrans, he said, “is sort of infamous for not having a lot of flexibility in their design standards.”

The NACTO endorsement was one of four “immediate” actions recommended by a January report from the State Smart Transportation Initiative that had been commissioned by Gov. Jerry Brown. Brown, who promoted Doughterty in 2012 from deputy director of Caltrans, has sided generally with Caltrans reformers but effected few top-level changes in agency practice until now.

Also Thursday, Caltrans circulated a two-page memo from its chief designer that explicitly endorses the NACTO guide as a useful resource for safe street design.

“Caltrans is currently analyzing these guides to identify areas of improvement in our own standards and guidance,” design chief Timothy Craggs writes. “This will be a focus of the department over the next year.”

Snyder, the statewide biking advocate, wrote in an email Friday that his group had been asked for input on Craggs’ memo.

“We enlisted a lawyer respected for his leading work in protecting local agencies from liability to review the memo internally before its release to ensure that it would be have as encouraging a tone as possible,” Snyder said. “The goal is to remind locals they can do what they want as long as they document their thoughtfulness about it.”

Co, the Oakland-based transportation planner, said last year that because bicycle riders and advocates are pushing for protected bike lanes in so many communities, he feels Caltrans’ role should be to endorse guides like NACTO’s that show how to make such facilities safe and comfortable.

“There’s some valid issues on intersection design and everything else,” Co said. “But there’s plenty of research that says people go and seek out these facilities.”