We began cycling about 5 years ago as a family. We’ve always enjoyed cycling, but over the past 4 years we have made cycling our main form of exercise. It began as therapy after the loss of my son, now it has become a life style.

My son, Shamus O’Daniel lost his life to Diabetes. Shamus was diagnosed with juvenile diabetes at the age of six and he lost his battle with this disease at age twenty-one.

While Shamus did not live a long life, during the brief time he was with us, he left an indelible mark in the hearts and minds of all who knew him. Shamus was a sports enthusiast, and an active athlete who truly loved sports. He enjoyed team sports but most of all he enjoyed sharing his love for sports with his brother, Michael. The two golfed, skied, or played tennis together depending on the season. He also loved spending time with his cousins, Sam and Kiko. The boys, Shamus, Michael, Sam, and Kiko relished in their adventures from the time they were little boys.

Shamus was diagnosed with diabetes when he was six-years-old. For Shamus, coping with the disease proved to be a daily struggle. When he was in his early teens, he created a super hero who struggled with diabetes in an effort to share the complications of living with diabetes, and the possibility of overcoming its power. The character resembled a transformer-like figure. I believe that he was seeking transformative powers over the disease.

Over the past 3 years, I have organized a memorial ride to Devils Tower in memory of my son. For me, Michael, Cam and our family, it has become a spiritual journey. From this experience, my goal was to organize rides to our sacred sites in memory of Shamus and others who have traveled on to the spirit world.

Born August 15, 1991, he died November 11, 2012, living 7,665 days on this earth. That is the amount of money we hope to raise with this ride, to honor his memory and to help Lakota children live strong and healthy lives. 100% of the funds raised will go to Rural America Initiatives, an organization dedicated to providing better futures for at-risk Native American children and their families.” Lily Mendoza y Ducheneaux, Shamus’ mother.

For more information about Shamus O’Daniel, please see The Shamus Project on Facebook. 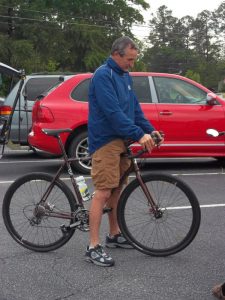